Cover image by Zunar Cartoonist Fan Club. Other images by Cherise Be.

Fight Through Cartoons, a recently released semi-autobiography and part philosophy on cartooning by Zunar will provide practical tips on how to creatively fight your opponents.

Published by Marshall Cavendish, the book zooms in on the challenges faced by the popular Malaysian cartoonist from the time Najib Razak took power in 2008 until the day Barisan Nasional’s 62 year reign ended on May 9, 2018.

Zunar had approached me initially to assist him with this book in 2015. However, at that time, I felt there was more to his story that was to be told. Three months after the fateful political change, I messaged Zunar in July last year, telling him it was time to write his book. 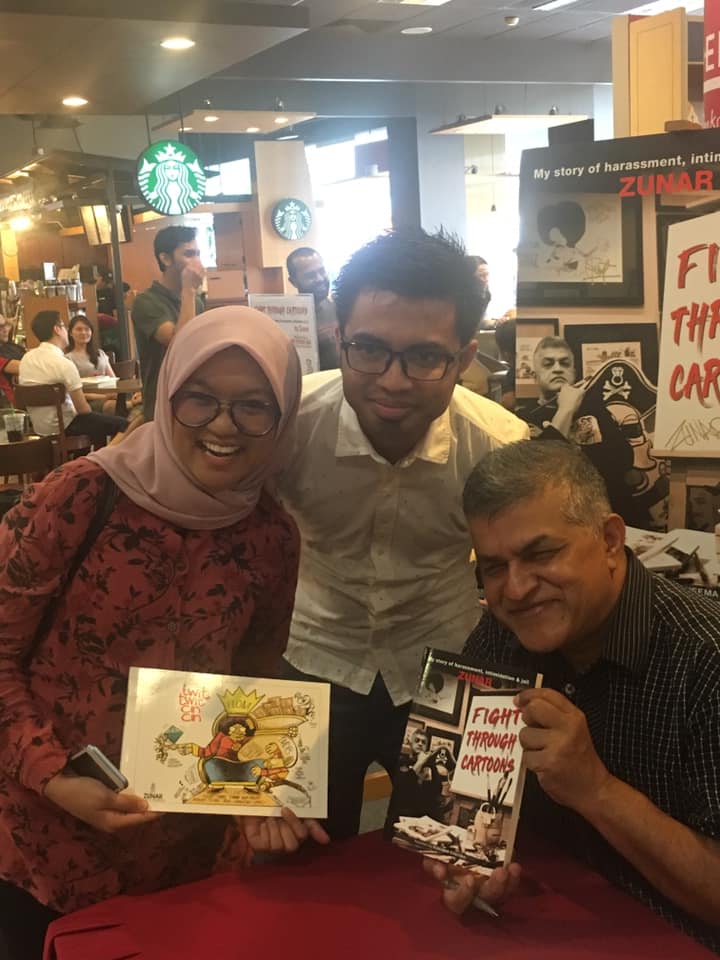 It had taken me close to eight months to research, collate, interview, transcribe and rewrite the book until the both of us were happy with it (Special thanks goes to Anita Teo of Marshall Cavendish for being extremely patient with the two of us).

Zunar also took the pains to ensure that the message of the book was simple and easy to understand.

“I want it written in such a way where even a farmer in Uganda understands what I’m saying,” Zunar had said, when we first met to discuss about the book.

While this book divulges on numerous unheard (and never reported) incidences in Zunar’s 10 year long struggle in his own words, I have to admit that it was an honour to have taken on a momentous task in documenting part of Malaysia’s ever expanding history.

So who exactly should read Zunar’s Fight Through Cartoons? 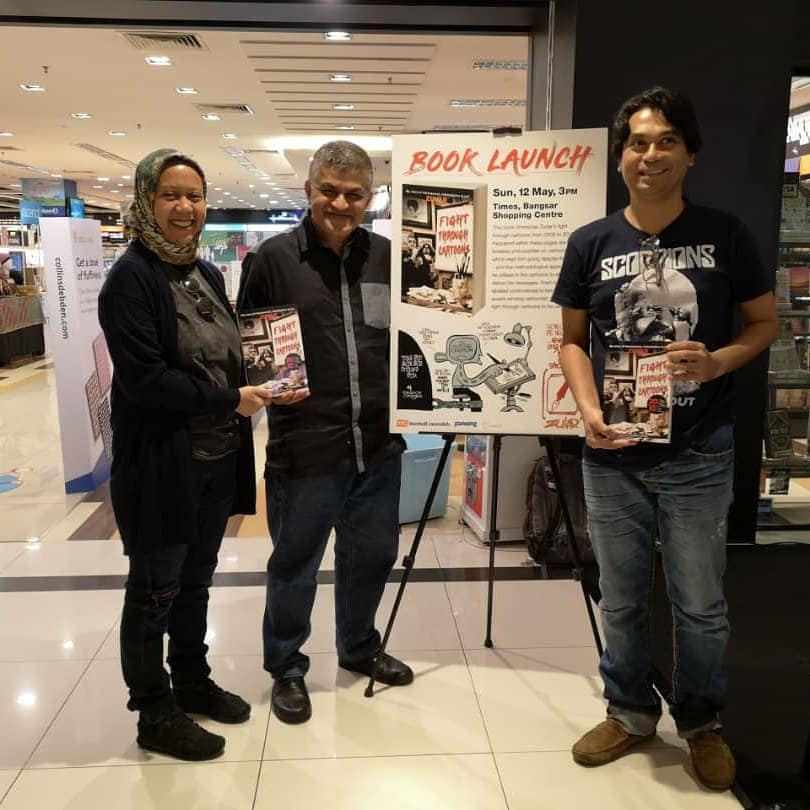 Kinda obvious since the book is about a cartoonist and written by one as well. While the book sheds insight into Zunar’s mind when it comes to crafting his cartoons (there’s an entire chapter dedicated just for that), this book also serves as a morale booster especially for cartoonists who use art as a means to make a change through activism.

Art does play a huge role in bringing about change. Zunar’s book explores this in depth.

For lovers of history, this book is a must have memento of a time when Malaysia was at its darkest hour and yet it managed to claw itself out thanks to numerous people such as Zunar who made it possible.

The period between 2008 to 2018 is considered by many as a dark era in Malaysian history due to the numerous scandals and human rights abuses that had marred an otherwise pretty okay  nation.

Whether things would turn out for the better or worst remains to be seen but history lovers would find it interesting how one cartoonist played a pivotal role in shaping Malaysian history. 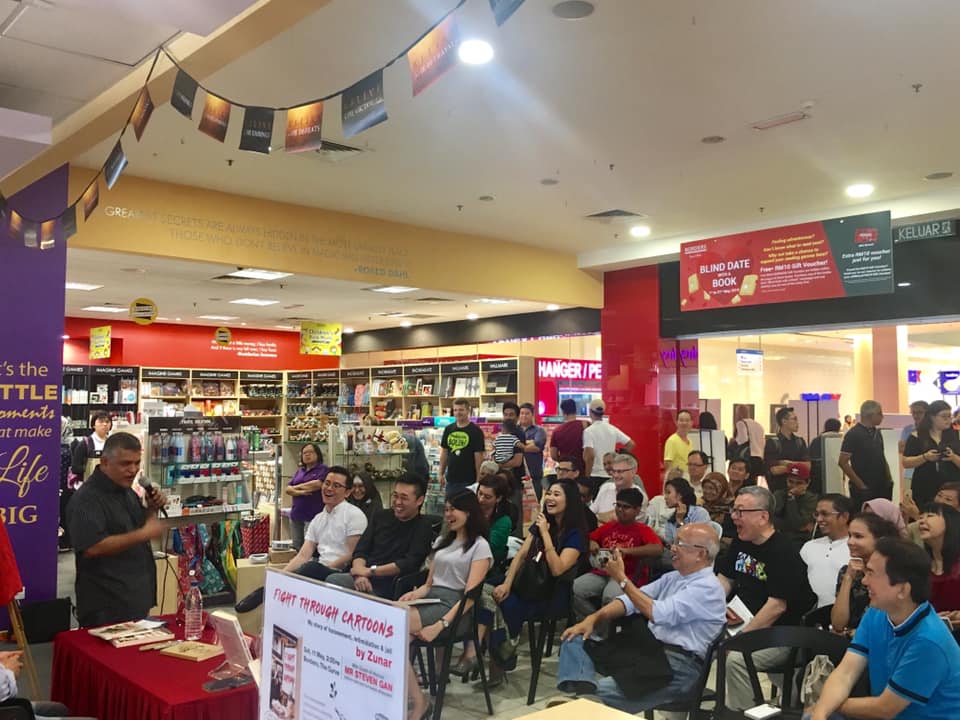 I would recommend this book to politicians or anyone looking to pursue politics. In Zunar’s own words: “If you’re not corrupt, you won’t become a cartoon.” The book showcases the tactics utilized by the then government to shut Zunar down and how the cartoonist cleverly fought back through his own means.

At least two to three chapters are dedicated to Zunar’s court battle – this would appeal greatly to legal practitioners and human rights lawyers. Through these chapters, one can observe how quick witted both sides had to be to outdo one another and triumph in the eye of the law.

Don’t laugh. I’m serious! Think about it, Zunar was threatened, arrested, imposed a travel ban and charged in court for Sedition. Yet, he managed to sell his cartoon books.

This book showcases some of the ingenious marketing tactics that Zunar employed to keep himself in the game despite heavy government clampdown.  It might not provide the know how for businessmen to craft their sales pitch, but it will inspire and motivate any person. 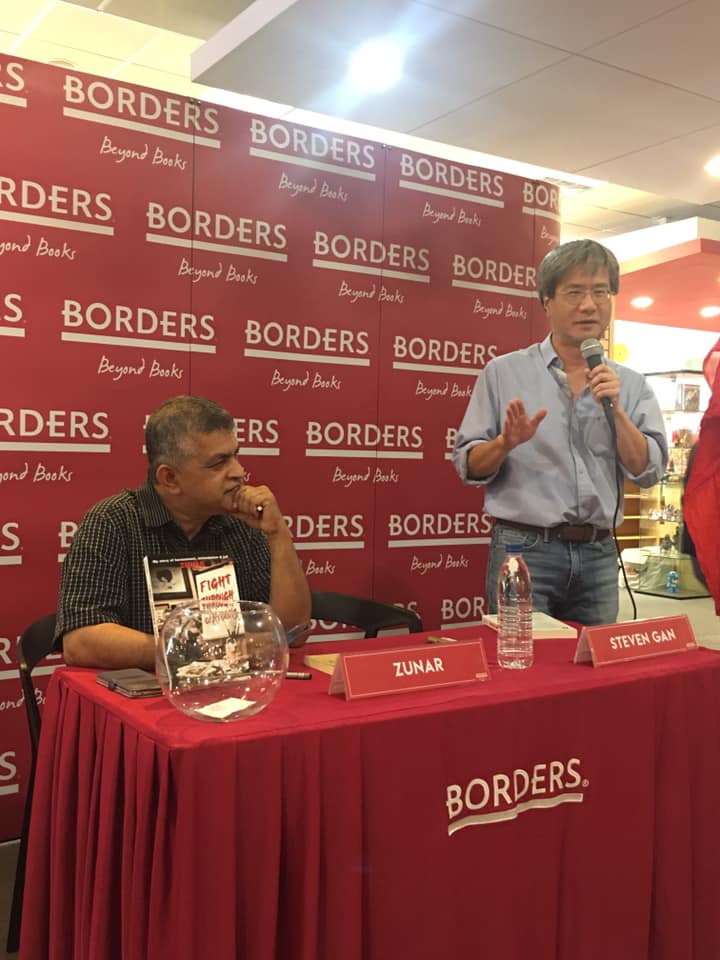 What I found most interesting were the choice of words used to describe Zunar between 2008 to 2018. Majority of the mainstream media labelled him “controversial” despite him winning numerous accolades abroad. The word, “celebrated” was only used together with the cartoonist’s name only recently.

This book,  I hope, sheds light on the power the media has in upholding the truth. I hope, it also serves as a strength for those looking to fight for what they believe in. 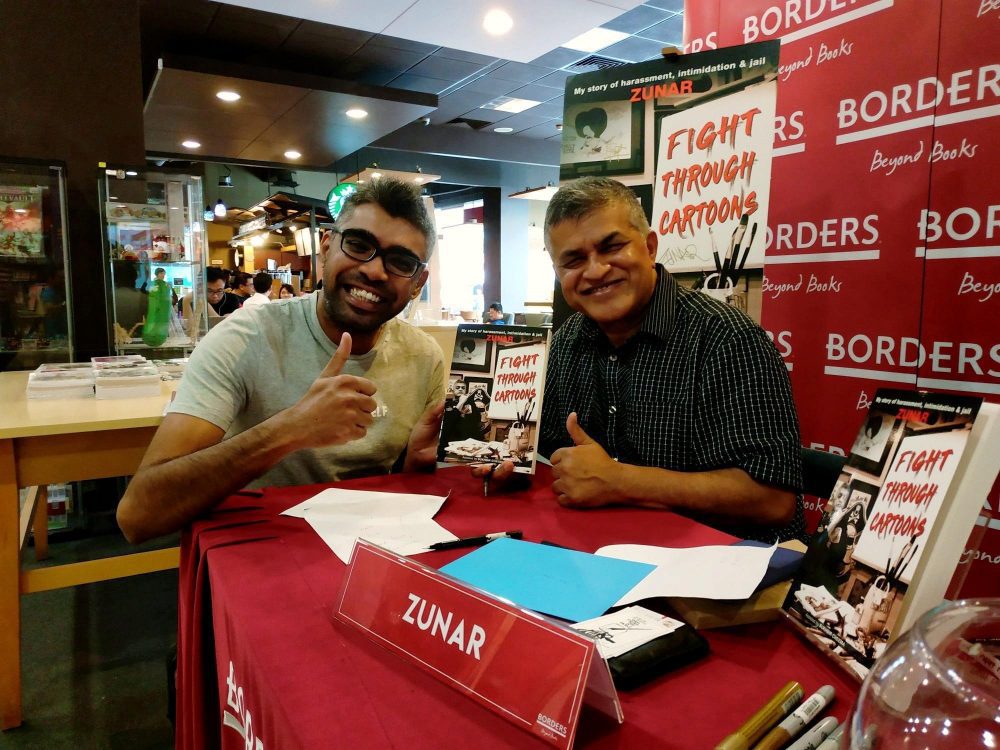 BONUS: Anyone in need of a pick-me-up.

What kept Zunar going were the numerous philosophies that he had create for himself during the course of his struggle.

Some are witty: Why Pinch When You Can Punch? While some honest: Struggle is an endless marathon. Zunar’s philosophies are universal and he explains them in depth for those who wish to utilize them in the various aspects of their lives.

Zunar’s Fight Through Cartoons is available at all major bookstores nationwide. You can also purchase directly from Zunar.