What’s It Like To Be The Illustrator Who Paints Najib In The Courtroom?

If you’ve been to the courts, you’ll know that you’re not allowed to bring in any form of recording devices the likes of video cameras, photography equipment and even audio recording devices.

Thanks to this rule which has been set up to prevent distraction and safeguard the privacy of the people involved in a trial, the job of the court illustrator exists.

In fact, this job is over 300 years old. What sets court illustrators apart than the rest is the fact that these artists are at the heat of the moment, documenting a piece of history while it is actually happening. 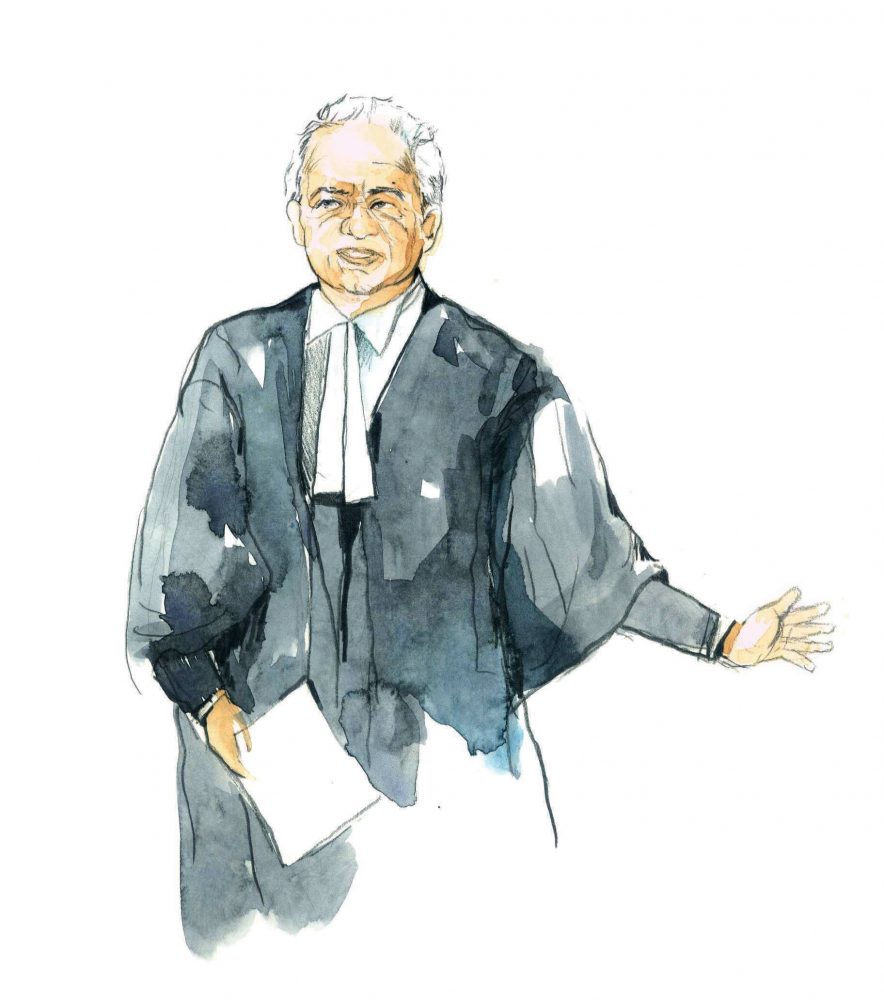 Nurul has been in and out of the courtroom, extensively covering the SRC trial of former Malaysian prime minister Najib Razak for more than two months now. It’s thanks to her, Malaysians are offered a rare glimpse into the courtroom where the former leader is being trialled for multiple corruption charges.

The KL born, who has been in the graphic design business for more than a decade, was a visual merchandiser for Pavilion KL and a creative art director for an ad agency before she was hired by The Edge Malaysia. 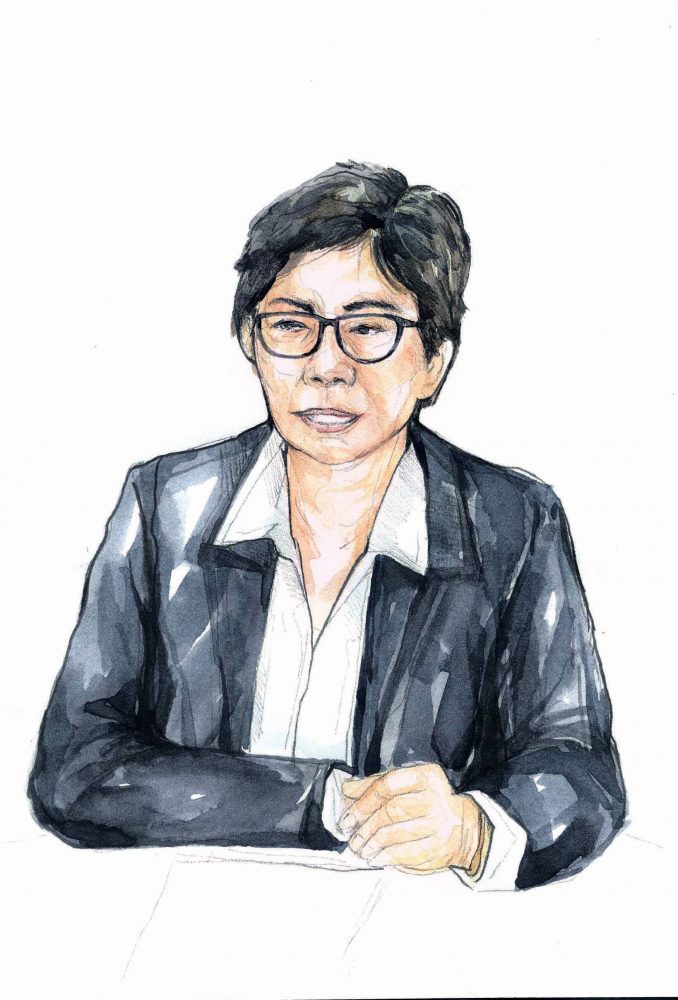 I was appointed to be a court illustrator when Najib Razak’s SRC trial began on April 3. I did not have prior experience, to be honest. It was my first field assignment, so I had no idea what to expect.

I was so nervous illustrating in public, let alone in a courtroom and seeing a public figure up close, but when I was there, I kept my focus and energy on what I had to do. My mantra was “keep your eyes peeled at all times for details”. Memorising faces wasn’t that difficult but it wasn’t an easy job either since we’re not allowed to take pictures in the courtroom.

But from the second trial onwards, I felt quite at ease because there was some sort of familiarity. 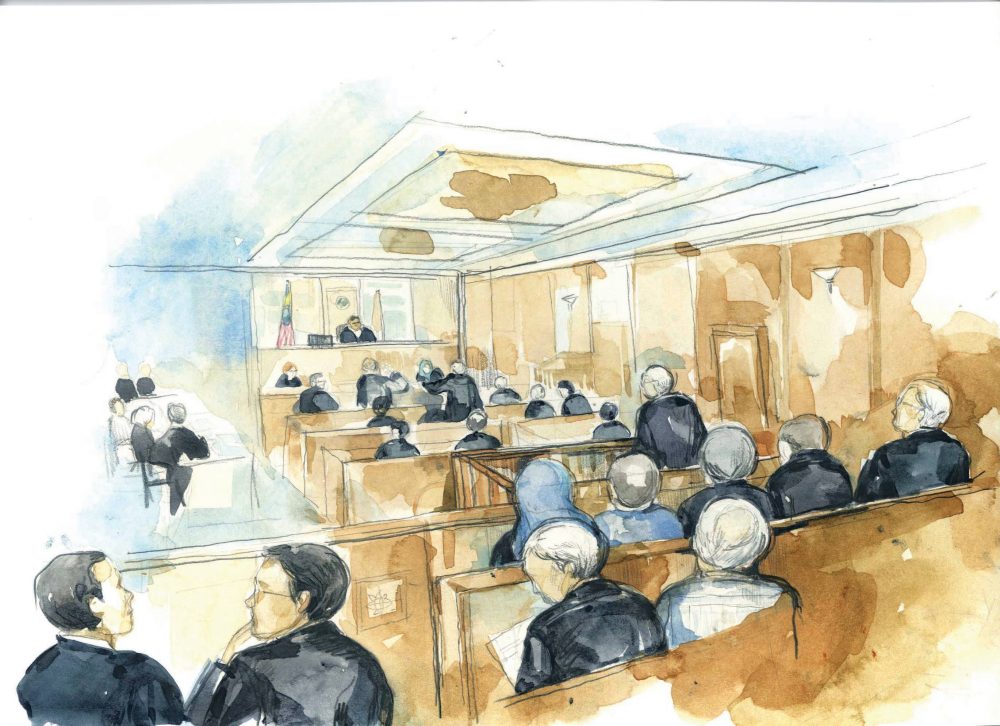 What ran through your mind when sketching and painting Najib? Did you feel sympathetic or disturbed?

To be an impartial observer, I had only two goals — to focus on the assignment and to get the job done. As a visual interpreter, I tried to stay neutral and to reserve my judgement. 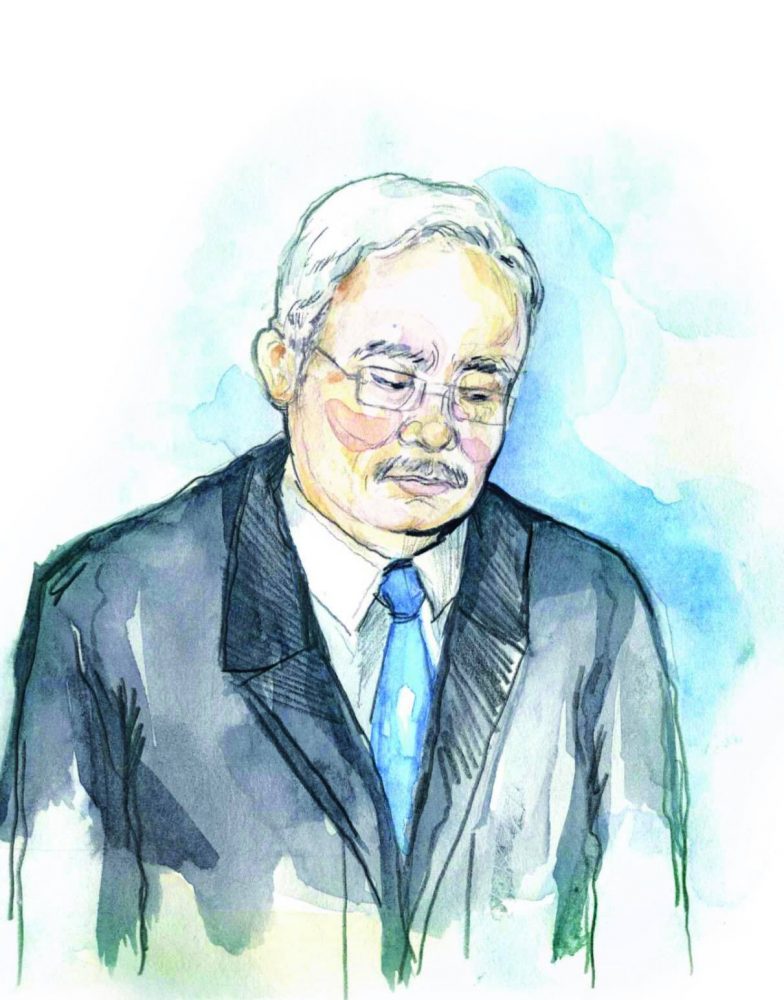 The paintings of Najib depicted him looking absolutely crestfallen. Almost remorseful. Was his persona in court extremely different than how he presented himself in public?

I don’t know how he is outside the courtroom. Only what I have read or seen in the news. I only draw what I observe while he is seated in the dock. 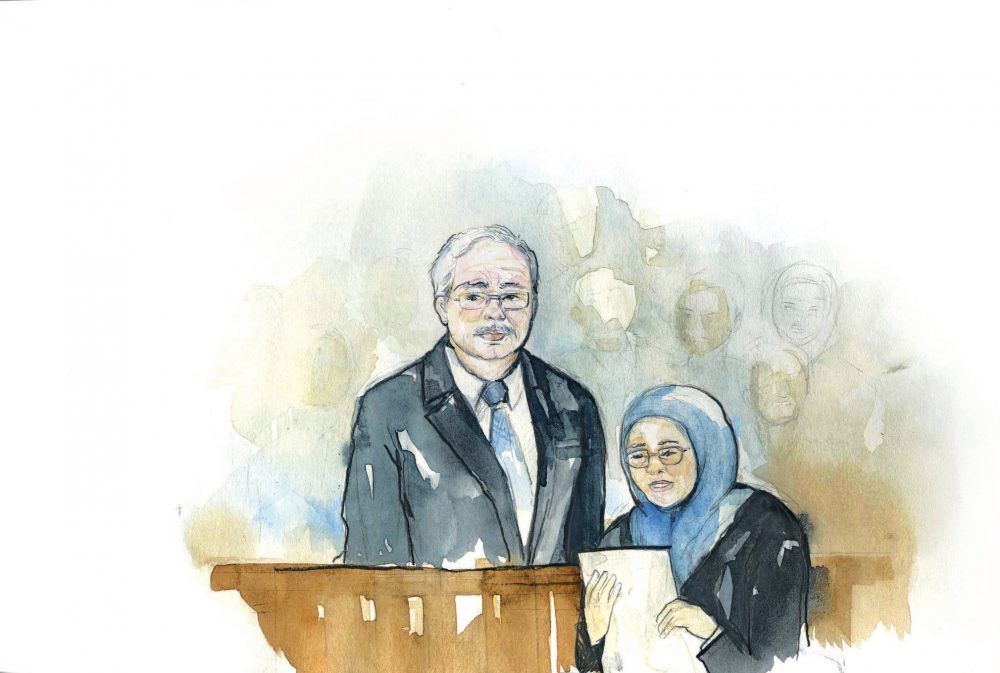 You did a good job of painting Najib at the courtroom. How do you feel, knowing that your paintings are now among the rare few artworks that documents a significant moment in Malaysian history?

Thank you! I am honoured to have been given such a huge opportunity and am always pleasantly surprised whenever people tell me they appreciate my skills and the time I have spent on my artworks. Not everyone can have the privilege of sitting in a courtroom, a few feet away from Najib. 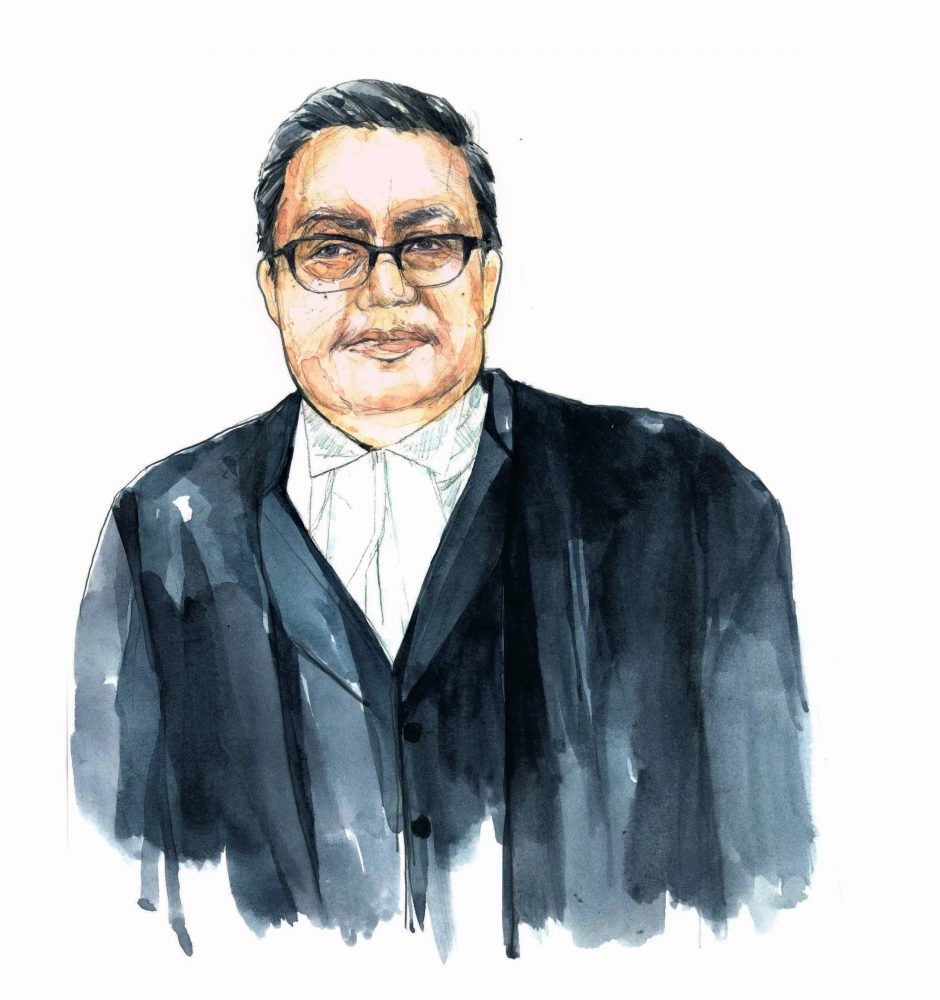 Since you were sketching and painting live, was there any technique you used to save time or to cleverly “cheat” as you painted?

Finding the right position of the subject and getting as much details and facial expressions as possible are important. Usually, I start with a pencil sketch. I observe the person I am sketching (Najib), and the surroundings and other people in the courtroom.

Seated at the bench like everyone else in court, I had to do quick sketches and jot down details of what I have seen. For example, describing the type of blue suit he had on. I did some visual research (homework) beforehand. I studied his facial contours, posture and clothing.

I love working with watercolour but it can be tricky to handle when you have to be quick on your feet to capture the details in minutes.

What were people’s perception of you – critics and supporters of Najib specifically – when they realised you’re a court illustrator?

I don’t think I created much buzz. Only people from the media background gave some comments here and there. Nothing much really. It’s just like any other ordinary day.

I usually come in to court early in the morning. When the court is in session, I keep my eyes peeled, and draw. I got to credit my colleagues – the court writers – for always providing me update on the trial and pointing out who’s on the witness stand. The courtroom is an unfamiliar world to me. In the end, all of us (whichever news portal and media) have one common goal which is to deliver factual news on time.

As for Najib’s supporters and his critics, I haven’t had anyone come up to me to ask or comment anything. However, I  am my own worst critic when it comes to my artworks – especially when I don’t draw good enough. I’m very particular with colours, the proper angle and strokes which can be at times overwhelming for me. Even with my favourite pencil by my side, I can feel a little frazzled sometimes.

How has the reaction been from the personalities themselves whom you’ve painted?

Some have provided feedback. Some are quite happy that they looked handsomer when illustrated. People are generally nice here in the courtroom. 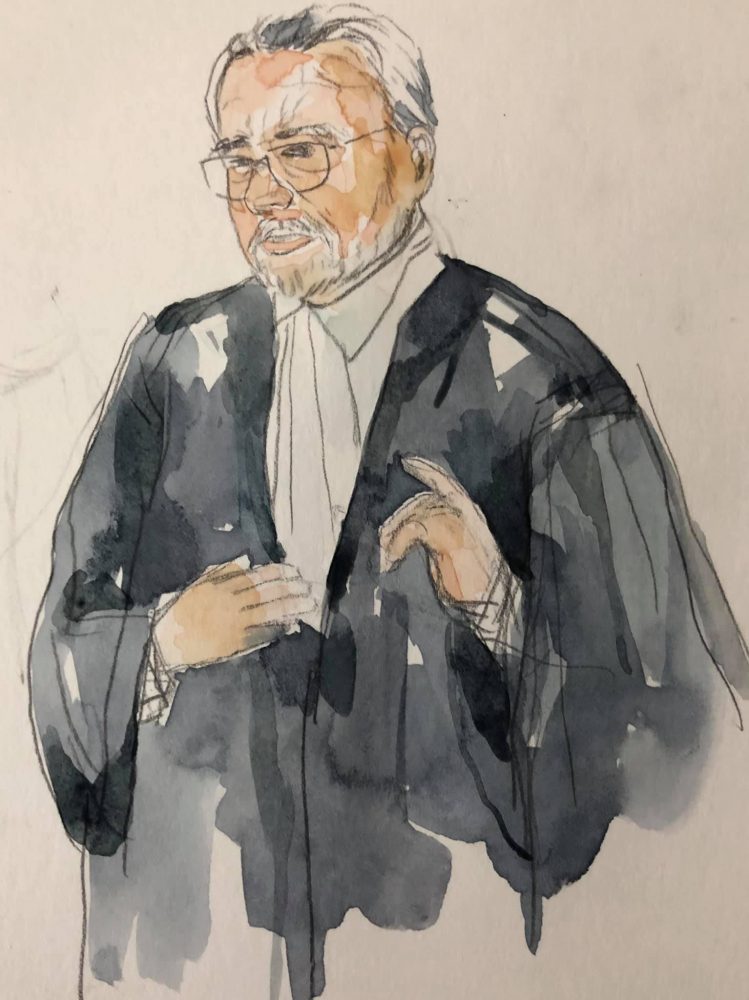 You also had a few of them expressing their interest to purchase these paintings.

The original paintings were not purchased. They belongs to The Edge. One or two lawyers did request for soft copies and reprints. I’m still getting around to signing them.

Wow, nice! Did any museums approach you to include these paintings in their galleries?

None yet though it’ll be cool to draw for museums. I’ve actually done museum commissions in my early 20’s. The huge intricate wall murals in Melaka Stamp Museum of Melaka Old House were done by me. I also did another one for the Malaysian Armed Forces Museum in Kuala Lumpur. I also drew tiny murals for Makam Mahsuri in Langkawi.

I’d be stoked if I get a spot in any museum or galleries. So far I’m just taking one step at a time.

If you’re keen to check out Nurul Aida Mohd Noor’s illustrations, follow her on Instagram. Enjoyed this piece? Read this too!

Have an interesting art story or personality you would like us to write about? Drop us an email at [email protected]