93% Of Malaysian Artists Have Been Negatively Impacted By COVID-19. Here’s What You Can Do.

The COVID-19 pandemic has not only disrupted the lives of billions of people on earth but also sealed the fates of many arts organizations across the globe that were already bleeding financially.

In 2015 the UNESCO estimated the market size of the world’s cultural and creative industry at US$2.25 trillion, with nearly 30 million people employed. This figure was larger than India’s GDP.

As countries across the world began imposing travel restrictions and social distancing measures, Cirque du Soleil, emerged as among the first iconic casualties. The Montreal-based circus giant announced that it was filing for bankruptcy.

Art organizations with a lean and youthful team quickly pivoted to social media to entertain their friends and fans. As people stayed indoors, major museums began offering virtual tours. In the UK, theatre production companies uploaded videos of their past shows experienced huge surges in online views, sparking the possibility of the arts going digital in the age of the ‘New Normal’.

In Malaysia, Liver & Lung Productions released several of its shows on YouTube. A Facebook Live initiative was also formed among local performers and creatives under the hashtag #UnrestrictedStage.

As the dust gradually settles and Malaysia begins to loosen its two month long Movement Control Order (MCO), the devastation caused by the coronavirus is starting to surface more clearly.

According to recent findings by Malaysia’s Cultural Economy Development Agency (CENDANA), in the COVID-19 Impact to the Arts Report, some 93% of the 519 art players surveyed were negatively impacted by the pandemic.

Close to 70% of arts organisations lost most, if not all of their income. 46% had events postponed while the remaining 30% suffered cancellations.

The report, based on a survey conducted between March 19 to April 9, 2020, revealed another worrying fact: 63% of the art players surveyed didn’t have an active Employees Provident Fund (EPF) account. Worse, 57% of the survey participants admitted to having dependent family members.

CENDANA’s report also highlighted that a majority of the arts and culture players were already losing more than RM5,000 weekly. In the months to come, 19% of the respondents believe their losses would continue to be more than RM5000 weekly, while 25% believe they will be making a loss of more than RM1000 weekly.

How are art organisations coping?

In an interview conducted by Options The Edge writer Mae Chan, The Kuala Lumpur Performing Art Centre’s (klpac) head of marketing and communications, Ang Yue May, said the established art centre had lost more than half a million in April, 2020 alone after all the shows were either canceled or postponed.

The klpac was already experiencing severe financial constraints and facing the possibility of being shuttered even prior to the MCO. Despite its RM 4.18 million expenditure, the arts centre had managed to stay afloat with aid from corporate donations. (figures are as of 2016, so they could be higher if taking into account inflation and other added costs).

The klpac is not the lone establishment facing woes. Istana Budaya, ASK Dance Company, Ramli Ibrahim’s Sutra Foundation, and practically the entire local arts scene, is already facing dire straits, with no clear light at the end of the tunnel.

As key art players begin acclimatising to the fact that there won’t be any profits this year, the focus has now shifted to getting business back on track, under circumstances of The New Normal.

“Post-MCO challenges are very real because the very nature of our business requires an audience, and as people are drained financially, it’ll take a long time to recover. It’s not just a matter of rescheduling. Postponement is a loss. If shows are pushed to next year and we stage only one show a year, this year is a loss,” Ang Yue May told Options The Edge.

But wait, is art really that important?

Undeniably, the COVID-19 pandemic has brought about a domino effect on nearly all aspects of life and business. As the world gathers semblance from where it left off, the burning question now is: How to adapt?

Fortunately, despite the negative impact of the pandemic, a pertinent discussion on the roles of individuals, organisations and the government in supporting the local art scene has been brought to the fore. In a letter to Malaysiakini, academician and musician Adil Johan pointed out that more than just funds, it’s imperative for the Malaysian government to empower creatives to go digital. He highlighted the success of the the Ministry of Communications and Multimedia’s recent programme, #MuzikDariRumah, which sponsored 136 local artists to perform on the Muzik Malaysia YouTube channel.

“Nadir was fortunate to be included and stepped up to the challenge to record five songs for the program. One of the criteria for this programme was to cover at least two songs by other Malaysian artists. Such programs must be continued.”

Adil also recommended that the relevant agencies, such as the Ministry of Arts and Tourism, The Ministry of Communications and Multimedia, and CENDANA begin communicating and perhaps even collaborating to consolidate their efforts in supporting the local creative economy.

Speaking of the creative economy, while Malaysia lags behind, Indonesia and Singapore have already capitalised on the potential of their nation’s creative economy.  UNESCO’s 2015 report also showed that globally, the creative industries contribute to 3% of the world’s GDP and 1% of global employment.

Alright, so what can I do to support the arts?

While paying for shows and donating might be difficult for many of us, there are other ways that we can play a part to help our fellow artists.

The easiest and most effective way is to spread the word, either in person or virtually, to shine a light on your local arts practitioner or organisation’s digital offerings during this pandemic. It’s also imperative to share information on potential work opportunities, funds and grants that could assist those affected.

Some artists have also begun to hold online workshops and classes. Many are available at affordable prices. If you have extra money to spare, supporting these artists by purchasing their artwork or attending these workshops would not be simply charity, but you stand to gain as well, in the form of enriched perspectives and skills.

If you can’t muster any of the above, offering emotional support and standing up for the local art scene is an appreciated act in solidarity.

And if you’re an artist, please continue creating. 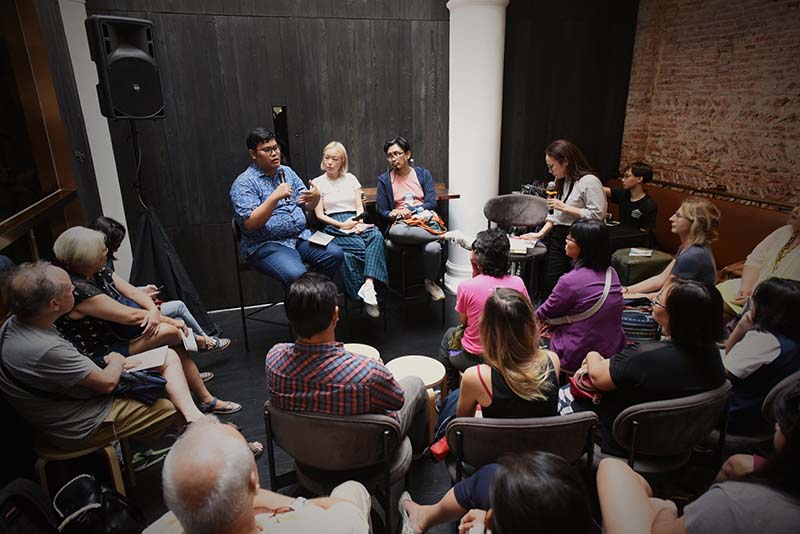