Websites to bookmark if you love the Malaysian art scene

These couple of years have seen a number of local websites being set up, dedicated in promoting the Malaysian art scene.

Some act as virtual spaces where events and happenings can be shared, others act as a medium where discussions on the local creative scene takes place, while a few more curate and produce writings related to the arts.

From writings, to films to poetry, we’ve got you covered on the websites that you MUST bookmark in order to keep yourself updated with the local creative scene.

***Pssst! To access the sites, simply hit their names in pink. 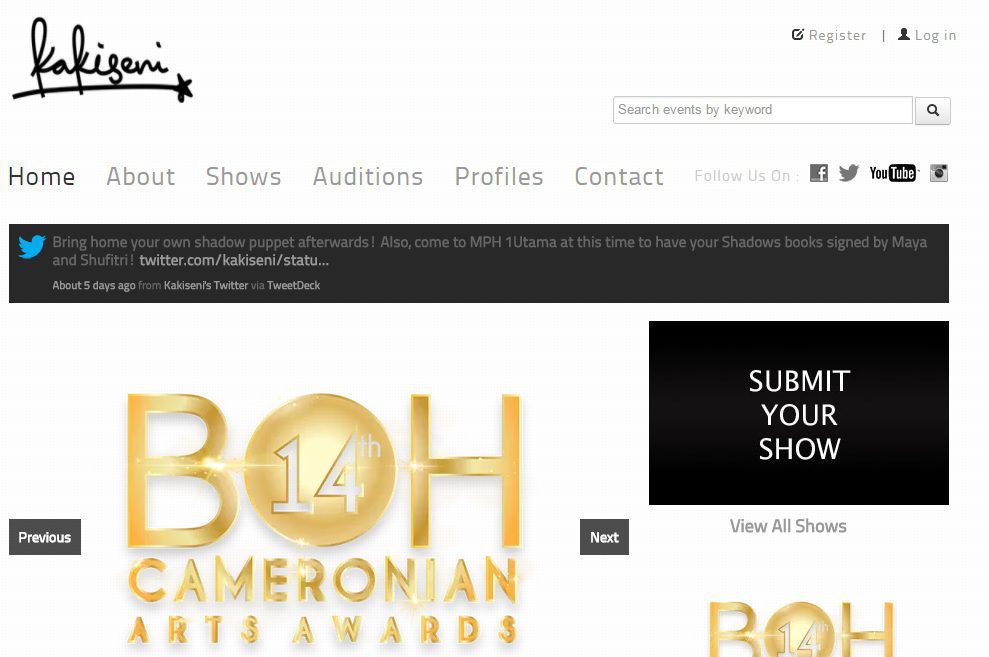 No longer a stranger in the Malaysian arts scene, Kakiseni is in fact the first local art portal that was set up by Kathy Rowland and Jenny Daneels to provide updates, information and reviews on the Malaysian performing arts back in 2001.

It was so happening that by 2004, the portal had become the place for folks to go whenever they were looking to audition for a show or film. These guys are also the same fellas who introduced Malaysians to the BOH Cameronian Arts Awards – an award ceremony honouring the best performing arts and artistes for the year.

However in 2010, the co-founders had to shut down the portal due to lack of funds. Enter Low Ngai Yuen and Ee Lai Cheng who brought the site back up online again in 2011. Currently, the portal acts as a listing haven for shows and auditions. Best part, it also has a profile of creative individuals, ranging from models to singers to comedians. A handy feature for folks looking to hire talents for their productions and gigs. 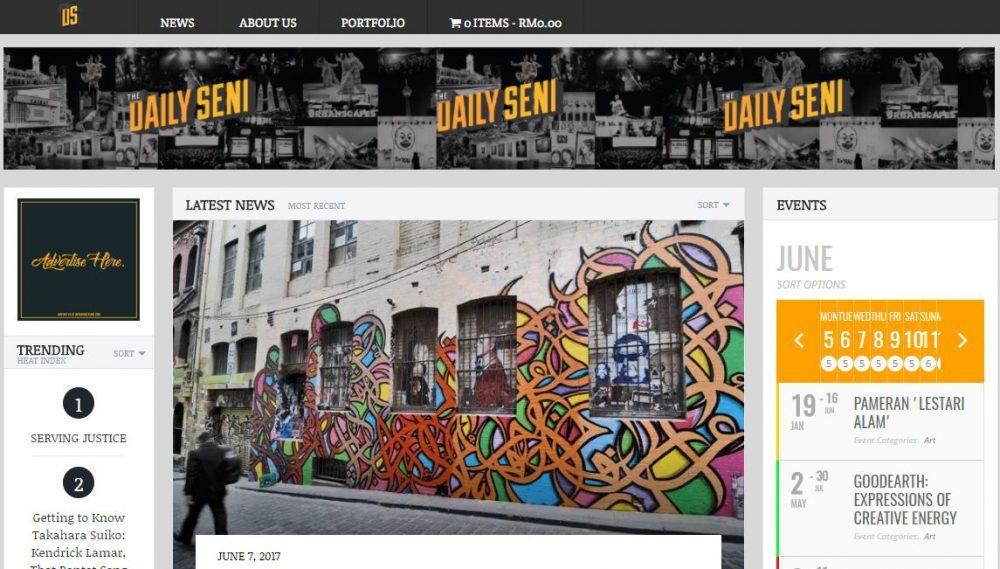 When it comes to news and features on the local art scene, The Daily Seni hails itself as being gossip free.

Making its entry in 2013, the portal has been making a huge difference especially when it comes to providing insight especially on the local film industry and performing arts scene. It is only recently the portal has been expanding itself by featuring poets and visual artists. It also provides custom campaigns for events and gigs. 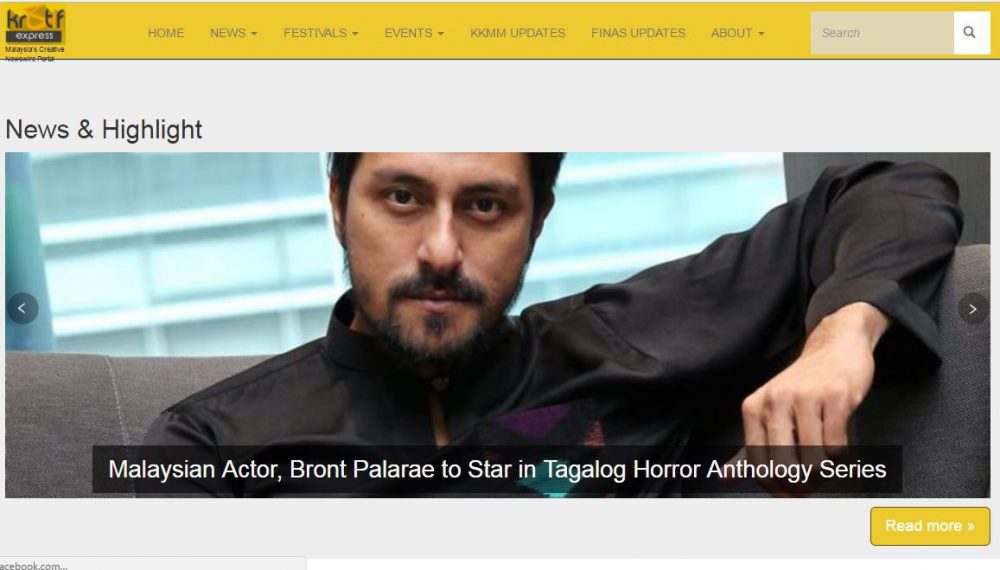 Set up in 2015, Kr8tif Express is a newswire portal supported by the Ministry of Communications and Multimedia Malaysia (KKMM) & National Film Development Corporation Malaysia (FINAS).

In a nutshell, the platform acts as a conduit for Public Relations agencies to circulate news on the movers of shakers of the creative industry with much of its news focusing on feature films, television, animation, and yes, even games! 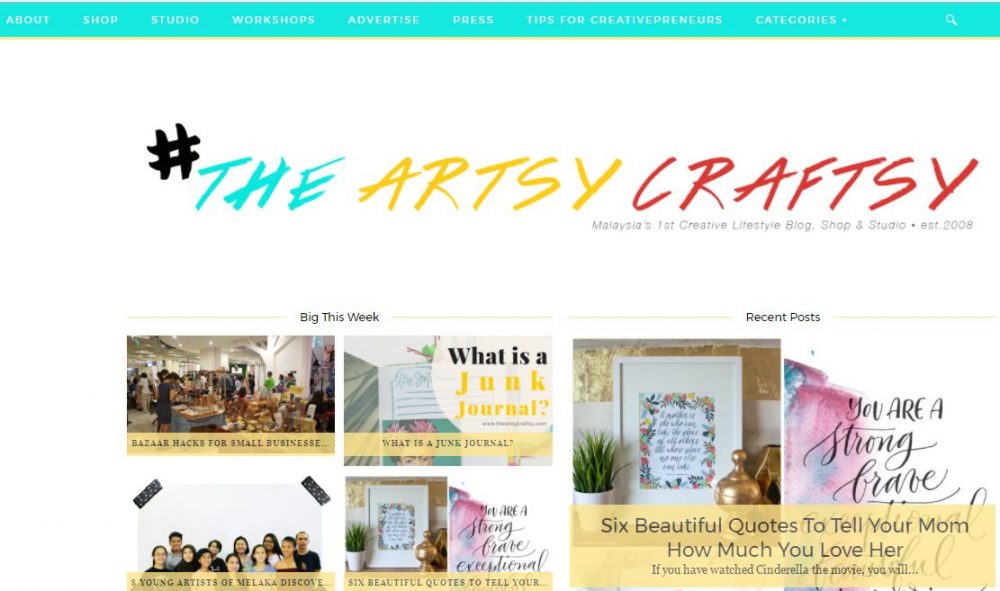 The Artsy Craftsy first began as a blog site wayyyy back in 2008 – a time when blogs were the in thing – by former copywriter Shia Lynn Toh. By 2015, the blog had become one of the top creative digital platforms folks visit to gain inspiration to get their creative juices flowing.

Lynn then quit her full-time job as a copywriter to focus on the site. Now, the site has grown with a number of awards under its belt, with The Artsy Craftsy owning a shop and a studio space of its own for folks to conduct creative workshops. 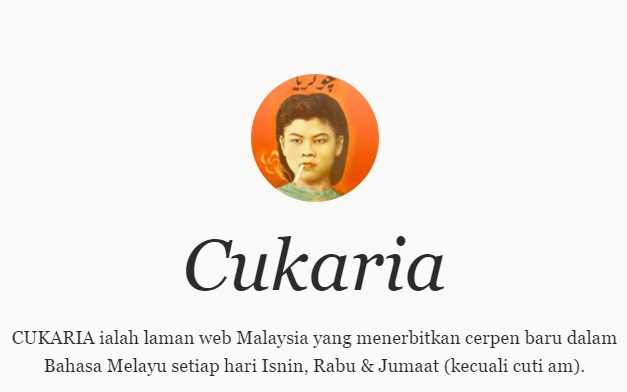 If you’re a lover of cerpen (short stories in the Malay language), Cukaria is the site to go to.

Created in January this year by publisher and film-maker Amir Muhammad, the website features original literary works by Malaysian authors. Best part, the visuals and artworks accompanying the short stories are actual artworks created by local artists themselves.

Submissions are still open if you’re interested in submitting your cerpen!

Ahh thank the stars for ARTERI!

If you’re a creative individual looking for a guide, or some ideas on how to approach funders or procure funders – you know, basically the mundane non-creative mumbo jumbo we creative folks usually loathe – ARTERI is your one-stop resource centre for useful information.

The website, run by a group of dedicated staff consisting of fiercely passionate art lovers, also regularly uploads useful contents for newcomers in the creative industry. Stuff such as how to prepare for an audition to legally protecting your creative works to even information on tax incentives.

How cool is that??

Six-years following the closing down of Kakiseni and its reemergence, one can be forgiven for thinking that Kathy and Jenny’s contribution to the Malaysian art scene was over.

Far from it! Last year, the duo introduced us to ArtsEquator – an online platform which gathers information, articles, events and ideas from Southeast Asia into one beautifully curated site.

Not only does the portal write about the Malaysian art scene, it also provides us a glimpse at the ongoing creative happenings taking place in locations such as Singapore, Indonesia, Cambodia, the Philippines and more. Much of the features incorporate non-artistic elements which do form a huge part of art as well. Stuff such as history, theories, politics, religion, culture and policies.

With Kakiseni no longer providing a space for local theatre-goers to provide reviews on the performing arts, Centrestage.my has recently become the space where anyone can give their two-cents on shows that they’ve just watched. Provided you contact the editors first lah.

Focusing on three aspects of the local creative field; performing arts, music and fine arts, the site is also run by a group of passionate theatre lovers who provide space for folks to list their events, gigs and auditions onto the site.

Co-founded by Brian Johnson Lowe and Tshiung Han See, Thiscene is a content website which aims to connect creative industries within Southeast Asia.

Consisting of two main components; editorial and community, the site was launched in December 2016 and is a great place to share and learn on current creative events and happenings. 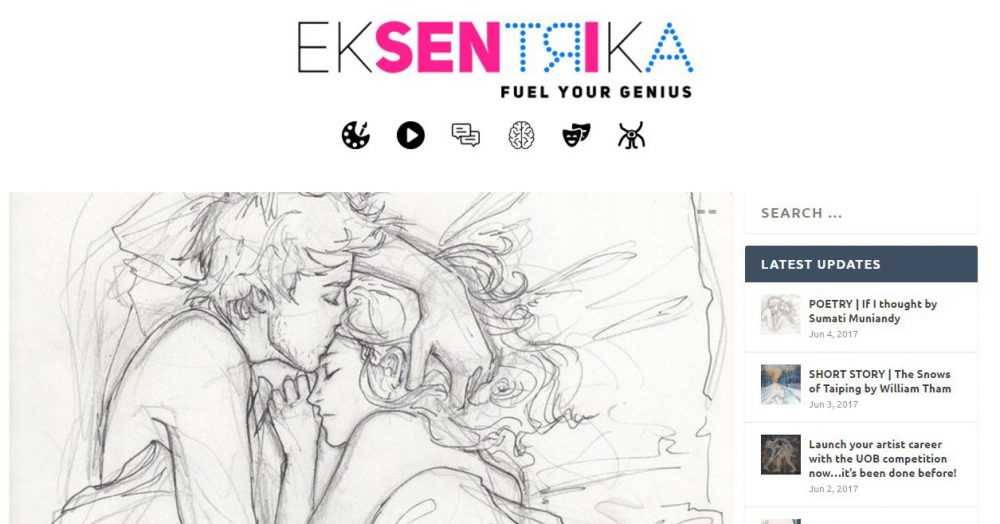 Okay lah, since we mentioned everyone, it would be unfair to not mention ourselves too right? I know, I know, I can visualise you shaking your head. We’re so shameless.

To recap, we’re former journalists who then decided to make better use of our talents to spur the local art scene. The idea for Eksentrika first came about in 2014, when the both of us realised that there was a lack of content website dedicated to the Malaysian arts. The closure of The Malaysian Insider became a wake up call for us to pursuit this initiative. And here we are, three-months short to turning one!

Our focus is on every aspect of the arts; performing arts, visual and fine arts, literature, music and anything that we deem artistically eccentric. We’re supported by The Actors Studio Seni Teater Rakyat.

Make sure to follow these guys on their respective social media platforms. Think we missed out a site? Drop us a comment or email us to [email protected]