TRIBAL TOTEMS & TABOOS – AND HOW TO BREAK FREE OF THEM!

As long as I’ve known journalist turned actor-playwright- author-director Kee Thuan Chye – and our friendship dates back more than three decades (including almost a decade when he “unfriended” me for bashing his 1992 staging of that infamous Scottish play) – he has struck me as a clear-headed, straight-talking sharpshooter who enjoys taking aim at all that’s mediocre, unjust and tyrannical. Whether through the written, spoken or dramatized word, Kee rarely beats about the bush. This makes his voice as a public intellectual good medicine for the national soul, even if subtlety is often sacrificed for accessibility.

This was once again evident in his latest theatrical production, Swordfish + Concubine, which marks Kee’s dramatic comeback after a long hiatus. Swordfish is an energetic, eclectic and electric take on an instructive tale recorded in Sejarah Melayu (The Malay Annals), wherein a precocious and perspicacious lad is deemed a potential threat to the mediocre powers-that-be and summarily executed. When I first came upon this fascinating folktale a long time ago, I saw it as a perfect metaphor for the intellectual and moral stagnation characteristic of feudal despotisms wherein tribal totems and taboos conveniently serve to dumb down the populace and keep them docile, servile, and blindly loyal to debauched and decadent overlords.

Kee in his producer’s notes states that he has been shaping and reshaping this punchy parable for a good twenty years. Its first theatrical expression was in 2008 when Ivan Heng of Wild Rice staged it at the OCBC Singapore Theater Festival; three years later a revised version directed by Jonathan Lim was staged at Singapore’s Drama Center Black Box; and less than a year ago Swordfish was staged in Mandarin by Loh Kok Man at Pentas 2, KLPAC. 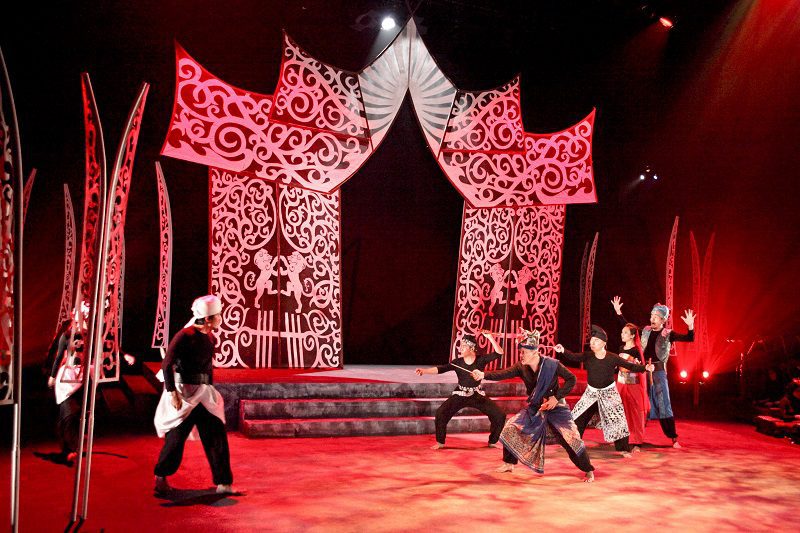 So much effort has been channeled into molding this work because it’s a play that lends itself Lego-like to a variety of dramaturgic interpretations. A bit of Brecht, a dash of Shakespeare, a whiff of Ionesco, throw in some Bangsawan and Wayang Kulit elements, insert some hip-hop – and the result is an engaging mix of pungent satire, socio-political commentary, polemical theater and tragicomedy with a distinctly Malaysian flavor (even if the setting happens to be Singapura, an island off the Malayan peninsula once known as Temasek).

With a dynamic, cohesive, ensemble cast of 12, a strong blend of experience and youth, and no prima donna roles, the action is a liquid, continuous flow – with dead bodies resurrecting themselves to reappear moments later in a different scene and costume changes occurring as if by magic. It wasn’t easy to keep track of the parade of personalities, as each performer played two or more characters. They had to act, sing, dance, fight and move props around as each scene merged into the next. But it was undoubtedly an enthusiastic, disciplined, focused and poignant ensemble performance – veering from commedia dell’arte style hijinks provided by Ris Kaw and Logod (the clownish “Greek” chorus, adroitly played by Iefiz Alaudin and Bella Rahim) to dark, dire and distressing theater noir (the public impalement of the Sultan’s concubine Nurhalisa, gut-wrenchingly portrayed by Hana Nadira). 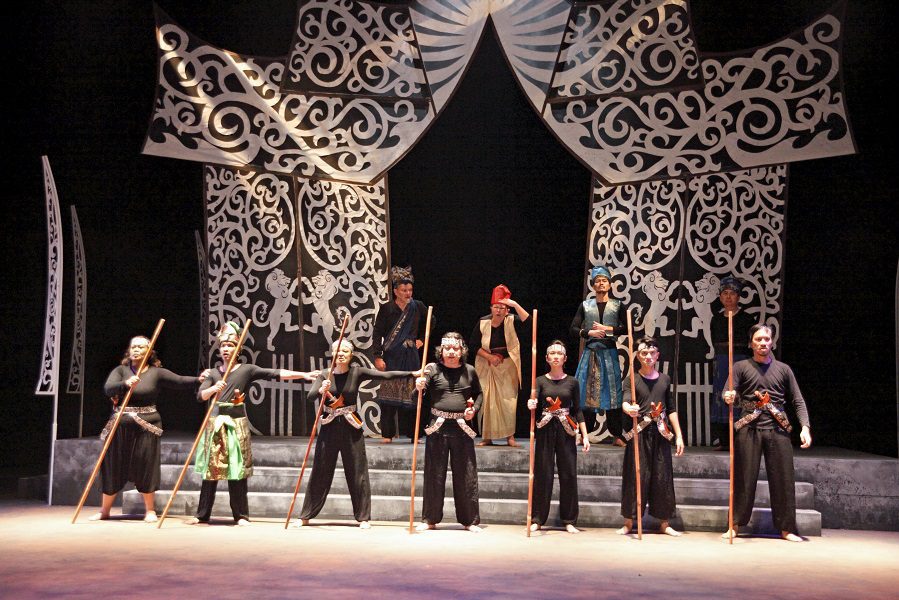 As Hang Nadim, the young genius who suggested building a palisade of banana stems against the swarms of killer swordfish, Joel Timothy Low won the audience over from the outset, so that his cruel and unjust murder elicited vicarious outrage. Veteran actors Sandra Sodhy, Na’a Murad and Lam Ghooi Ket lent professional gravitas to each character they played, while the younger ones (Alfred Loh, Arief Hamizan, Amanda Ang, Qahar Adilah and Gregory Sze) gave vigor and vitality to the proceedings. As Sultan Iskandar Syah, Gregory Sze was marvelously narcissistic, vulnerable and schizoid, sentencing the woman he loved to death by impalement just so he wouldn’t be seen as a weak ruler. Alfred Loh’s portrayal of the inquisitorial trial judge was blood-curdlingly convincing; and Amanda Ang’s Tun Dara, Sultan Iskandar’s love-deprived official consort, was sensitive and poignant.

A crucial dramatic element was the mesmerizing live “soundtrack” provided by the celebrated contemporary gamelan ensemble Rhythm In Bronze, under the masterful musical direction of Jillian Ooi and Teuku Umar Ilany (featuring guest percussionist Thong Yoong How). Indeed, almost everyone will agree that just listening to Rhythm In Bronze in action alone was worth the price of admission, they are that captivating. Choreographer Faillul Adam, costume designer Dominique Devorsine, and lighting designer Loh Kok Man deserve mention and a hearty round of applause for their excellent work on Swordfish + Concubine. 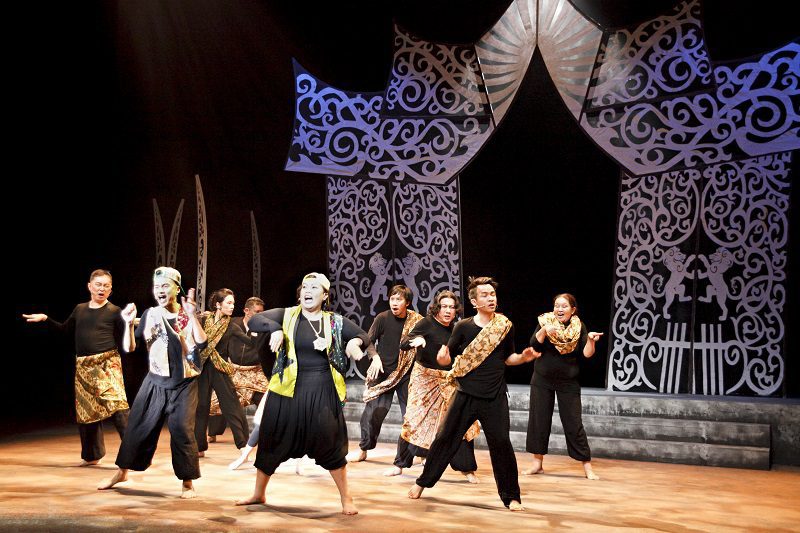 The political dimensions of Kee’s play are, of course, worthy of an academic treatise and everyone in the audience was electrified by the cogency and relevancy of his numerous allusions to the rotten state of affairs (at least in old Singapura, where the action takes place). All-too- familiar to us were the complacent, self-serving, sycophantic palace officials and ministers and their cunning machinations just to maintain their privileged positions and the corrupt status quo. The deification of royalty and the sanctification of “The Covenant” – a mythical Social Contract handed down from generations long gone – serve as tools of mass mind control, leading to cultural stagnation, abuse of the law, political paralysis, allowing criminals in public office unchallengeable impunity.

Setting up a “sovereign fund” and milking it for all its worth to support lavish lifestyles… the usual shenanigans that go unreported and unremarked in the muzzled media… arresting citizens for gathering without a permit in public places, charging them with sedition in the spurious name of stability and security… a secret police network payrolled by authoritarian paranoia… the very ingredients of a failed state once known as Temasek, now fallen into the hands of invaders.

But Swordfish + Concubine closes on an upbeat, optimistic note (“It’s time to rock, yo! And move to your own beat”) as the citizens begin to awake and embrace the possibility of – nay, the necessity for – radical, liberating change, a complete break from stultifying, toxic tradition.

Have you got a smashing review for us? Send it over to [email protected]