She quit her job, went on a solo travel through Europe and South America and left imprints of her art along the way. This might sound like a mere daydream for most people but for Ruby Subramaniam, it is part of her reality.

Now a year after trading a promising career in digital media marketing for a living off paintbrushes and canvas, the 26-year-old is making headway at becoming her own definition of “artist”. 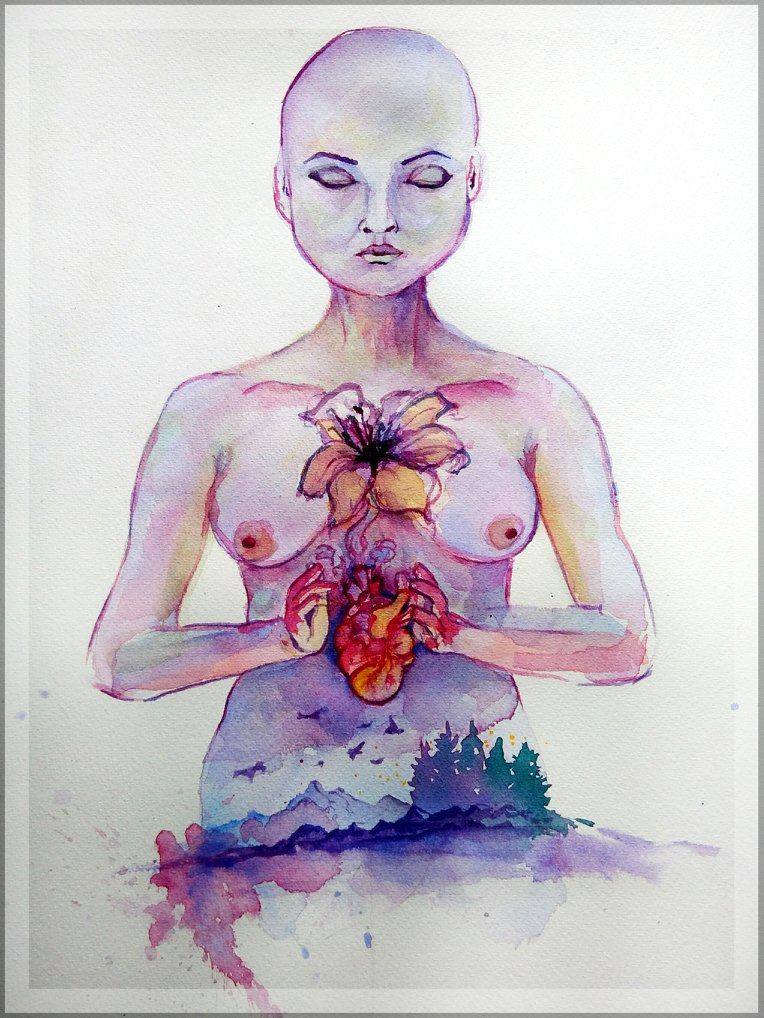 Her many current projects include planning her first solo exhibition, writing a modern day memoir and introducing international art events to the local scene.

She draws inspiration from the term “multipotentialite“ coined by Canadian career coach, writer and artist, Emilie Wapnick, who defines it as “a person who has many different interests and creative pursuits in life. Multipotentialites have no ‘one true calling’ the way specialists do. Being a multipotentialite is our destiny. We have many paths and we pursue all of them, either sequentially or simultaneously (or both).”

Not having formal art lessons or training never stopped this gutsy lass from experimenting with a variety of medium. Her pieces range from watercolours, acrylics, markers, ink and collages. 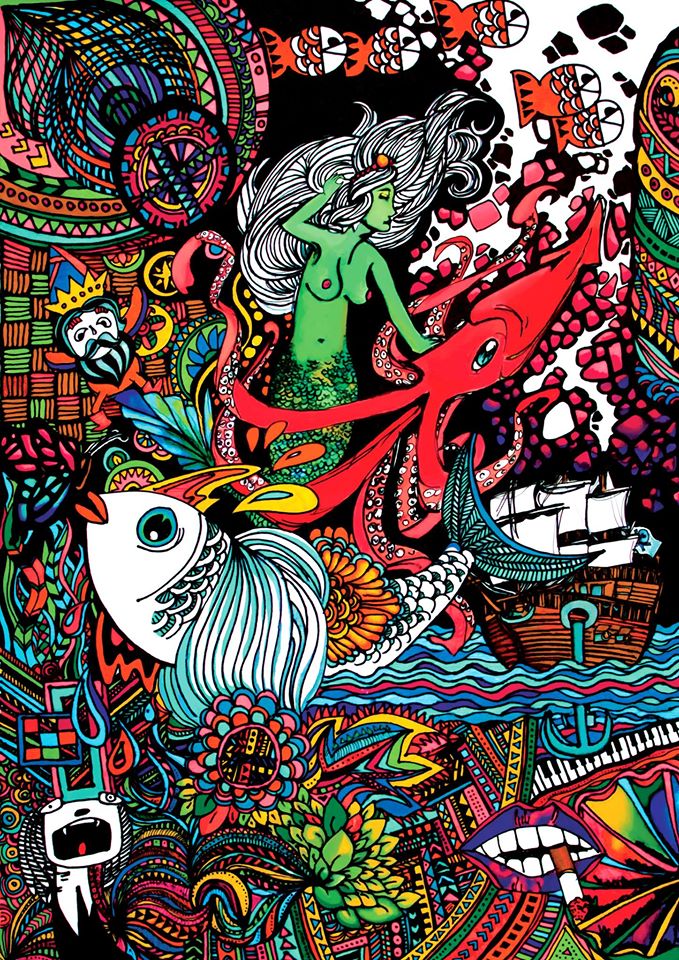 Although far from eking a living by selling her art pieces alone, Ruby is quick to debunk the starving artist myth.

” People think very traditionally when it comes to art…That you need to make art on canvas and sell in a gallery.

“There’s a whole market in being involved in corporate events that can help boost you financially but you need to strategize what you want to do as an artist. Essentially, it’s about being creative in the way you diversify your earnings

Ruby’s reference to corporate events indicates that there is a demand for artists to make appearances and showcase their talent at corporate organised functions or shindig. 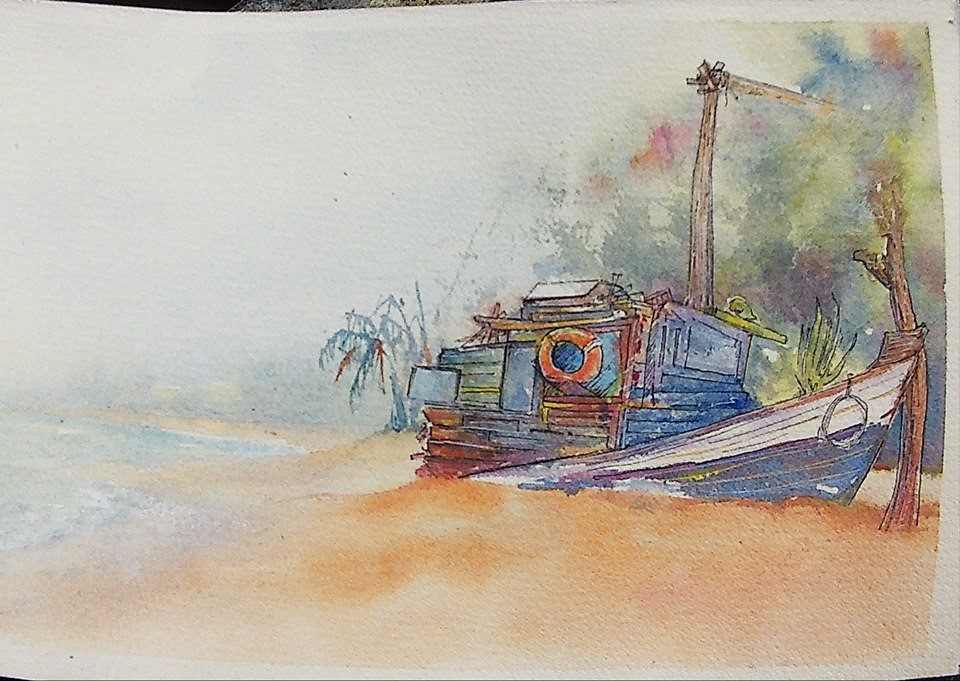 She also organises  community art events and juggles it with being a digital marketing consultant.

Despite her remarkable advances and efforts, Ruby confesses that there are still moments that she is dogged with uncertainty and doubt.

“To be honest, I wake up everyday these last 2-3 months and think what the fuck am I doing. I should just get a job…

“It’s all too scary, everything that I’m attempting, I haven’t done before. Sometimes I think, maybe I don’t have anything that great to say…but I still try to get confidence in my skills and not fear too much.” 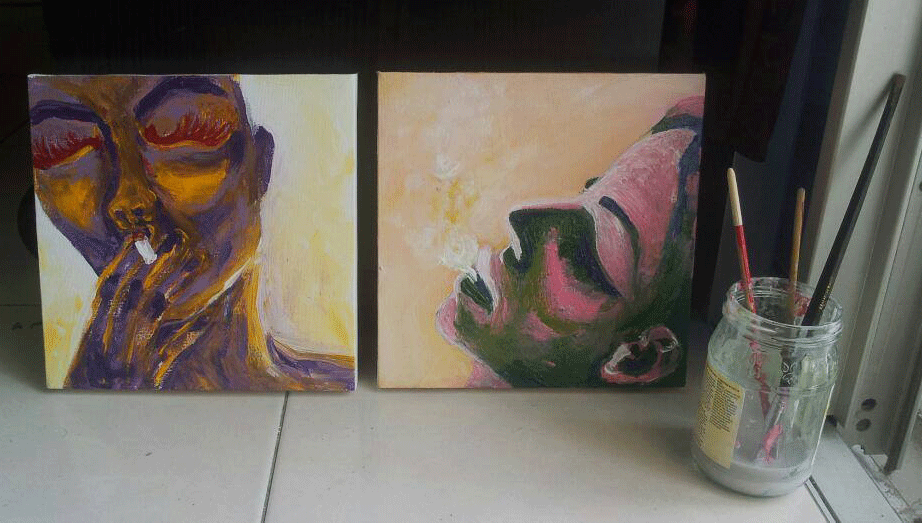 She acknowledges that her greatest challenge thus far, has been herself.

“The biggest step is dealing with (your) own insecurities. There are really no rules with art. You are free to do anything and that liberation can be a bit scary.

“I can create anything? But then what if people don’t like it? What if my work is not good enough (especially being a self taught artist). So many what ifs.. 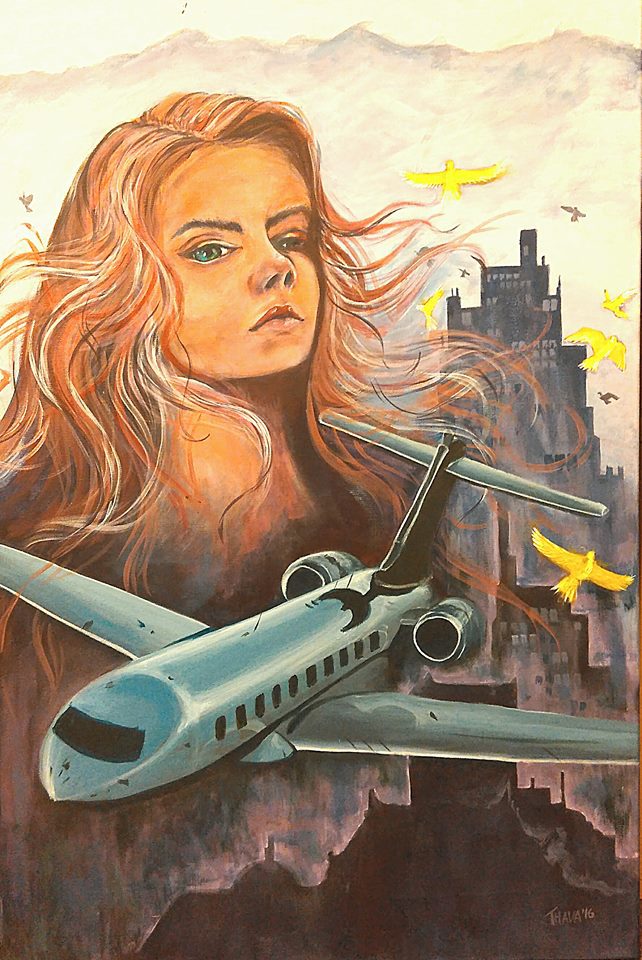 For Ruby, the battle within is a constant battle and she is continuously trying to figure it out and pull herself together. 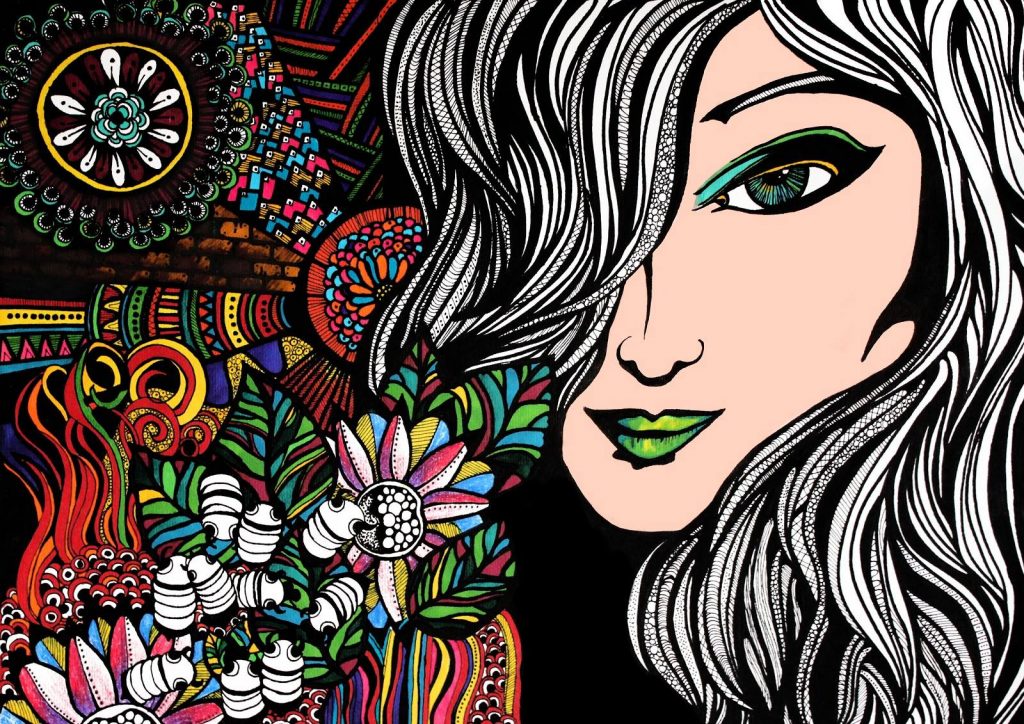 On other days, when external affirmation is necessary for a boost of courage, Ruby leans on the support of family, friends and even strangers who have expressed the joy they find in Ruby’s art, such as the message below by an ardent admirer.

“Ruby Subramaniam, every day that you get out of bed and feel like what is this existence, I want you to know that I met you at a turning point in my life and I took the right turn because of people like you. The thing about courage that you said, it was one of the many things that led me to the path of honesty. I am not a brave person, and most of my life, I have not been a truthful person. You are one of the people who had inscribed your fingerprints in sculpting all that I am today. In a single encounter. You remember that the next time your treacherous mind tries to undo your success.” – anonymous Ruby fan 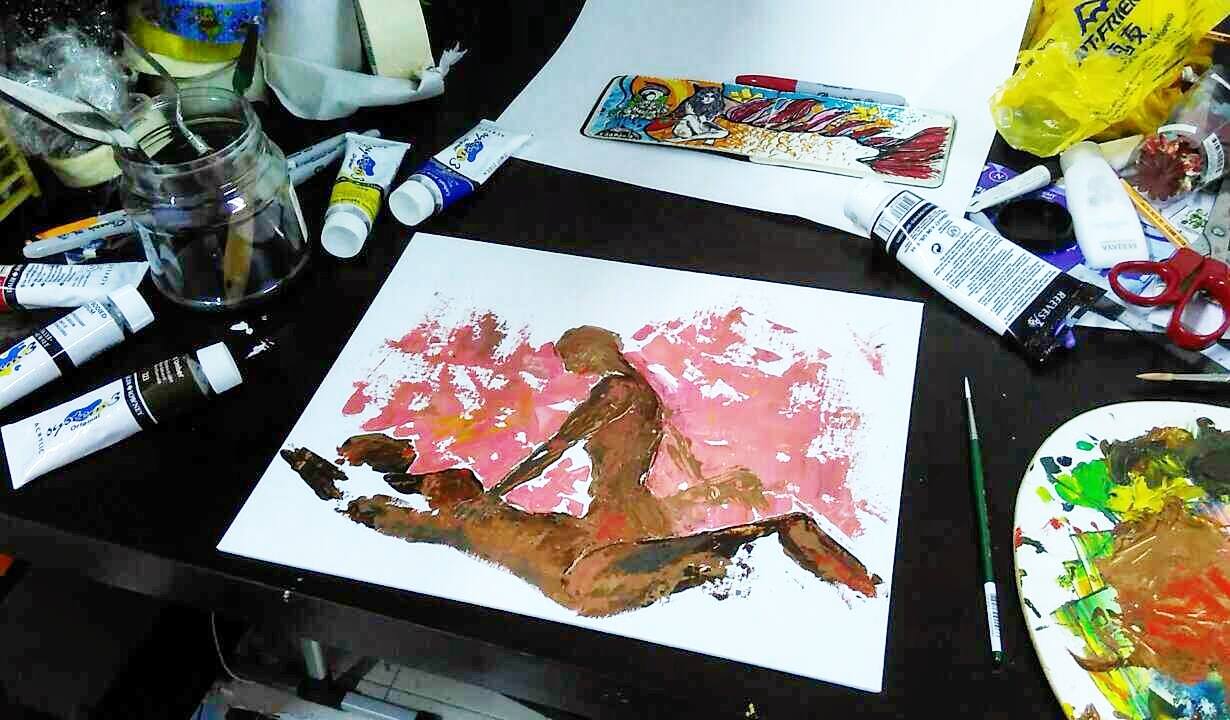 As we speak, Ruby is attempting to fill a void she believes she can fit in the Malaysian art industry.

“I notice that Malaysian artists have great technique but not many of them carefully plan out their exhibitions with a concrete theme, audience participation etc. Perhaps my technique is not that great compared to these people who have been practising for years but I’ve got a fresh perspective and a story to tell.”

I want to translate all my travel inspiration into art works.”

Ruby has since been to over 20 countries and 50 cities, and in some places she had bartered her talent for shelter by decorating the walls of guesthouses and even peddled her art on the streets. 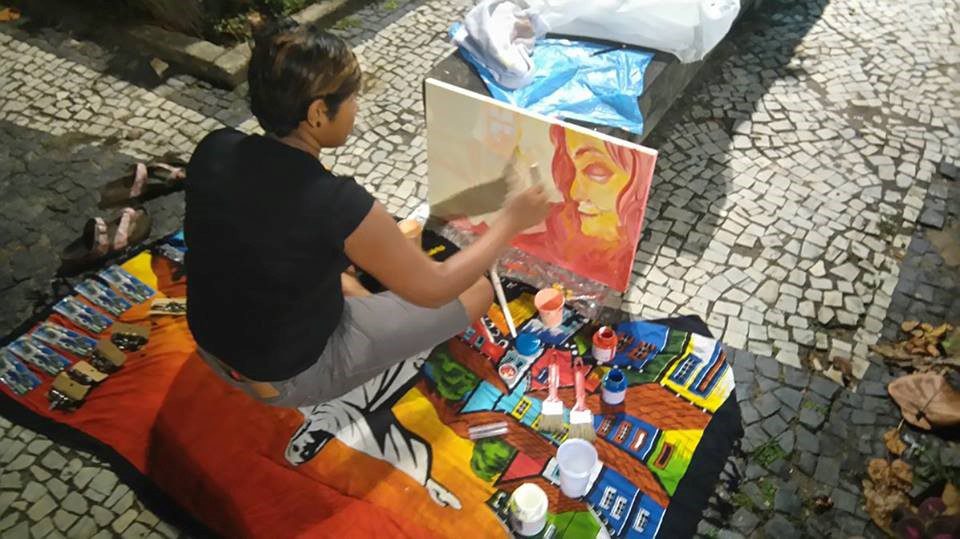 This bona fide hustler of Malaysia’s art world is bound to make waves with her treasure of talents and experiences. Last month, she shared her thoughts as a speaker at Young, Wild and Free, organised by TedxIntiKL.

She was shortlisted as one of the Pitchpad ASEAN finalist and presented her idea to launch Art Battle Malaysia amongst international art directors in the Borak Arts Conference 2016 in Penang. The conference was held in collaboration with the Georgetown Art Festival, which included 170 participants from more than 10 countries / Phillipines, Singapore, India and Ukraine.

She will be launching Art Battle Malaysia on the 22nd of October in The Square, Publika (5-7pm).

All images are courtesy of Ruby Subramaniam. The multipotentialite can be approached for commissions via Facebook. Are you an artist trying to define yourself by your own terms? Share with us your story, drop us an email at [email protected]