Do you recognise these symbolism in Zunar’s cartoons?

Earlier this week celebrated Malaysian cartoonist Zunar again found himself in trouble with the authorities. This time, he was not allowed to travel abroad.

The cartoonist was to board his flight on Monday to Singapore to attend a forum when he was stopped by Malaysian Immigration officers who revealed that they had received directives from the Inspector General of Police (IGP) Khalid Abu Bakar himself.

According to Zunar, the directive was issued on June 24, this year, preventing the cartoonist from travelling overseas. The directive came a day after Australian National University’s (ANU) New Mandala ran a piece on Zunar calling on Malaysians to join him in “crossing the line of fear“.

The hardworking cartoonist is reputed to be a vocal critic of Malaysian Prime Minister Najib Razak through his cartoons which he uploads on a daily basis.

For his dedication and resilience, Zunar received numerous awards, the most prominent one being the 2016 Swiss Foundation Cartooning for Peace Award from Kofi Annan in May this year. The cartoonist by then had been invited to attend and give talks in various human rights forums and was frequently interviewed by the media abroad.

In all of his interviews, Zunar brings back the interviewer’s attention to the fact that he faces a possibility of being imprisoned for a total of 43-years for nine counts under the colonial era Sedition Act just for drawing cartoons and tweeting his opinion online.

But did you know that Zunar puts a lot of thought into creating his cartoons?

So here they are, explained in chronological order! 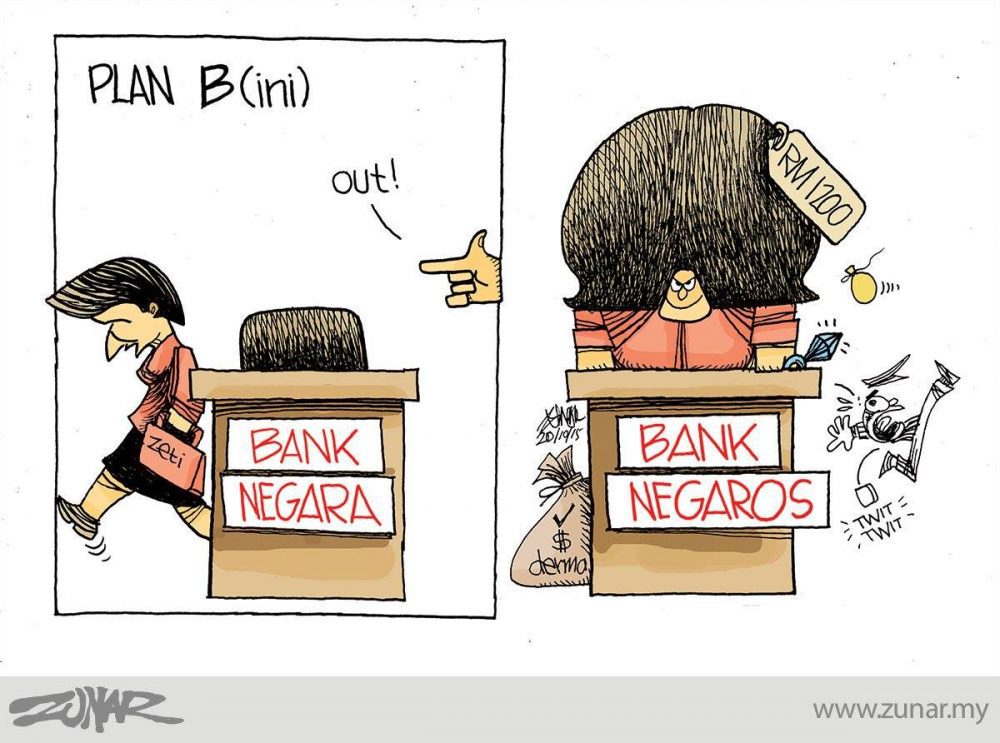 Ever seen a diamond ring hurtling towards or away from Najib’s caricature in many of Zunar’s cartoons?

The ring has long become a prominent feature. However Zunar first included it into his cartoons following allegations in 2011 that Malaysia’s first lady, Rosmah Mansor, had allegedly purchased a whopping RM73 million diamond ring.

In the video interview with New Mandala in June this year, Zunar stated that the ring was a metaphor to indicate Rosmah’s unseen presence.

The two letter “S” purposely drawn to at times resemble Superman’s insignia is constantly seen on Najib’s caricature. On rare occasions, the words “Spender Saiful” is regularly spelled out on an underwear which Najib’s cartoon character wears.

The cartoonist’s depiction is in direct reference to Saiful Bukhari, the former political aide to the now political prisoner of conscience, Anwar Ibrahim. The cartoon symbol emerged during Anwar’s Sodomy II trial in November 2014, where lead prosecutor Muhd Shafee Abdullah suggested that there was a likelihood that remnants of semen had dislodged from Saiful’s anus and stained his underwear during one of the medical procedures performed on the latter.

This, despite it was established that Saiful had worn different undergarments on the day he was allegedly sodomised. 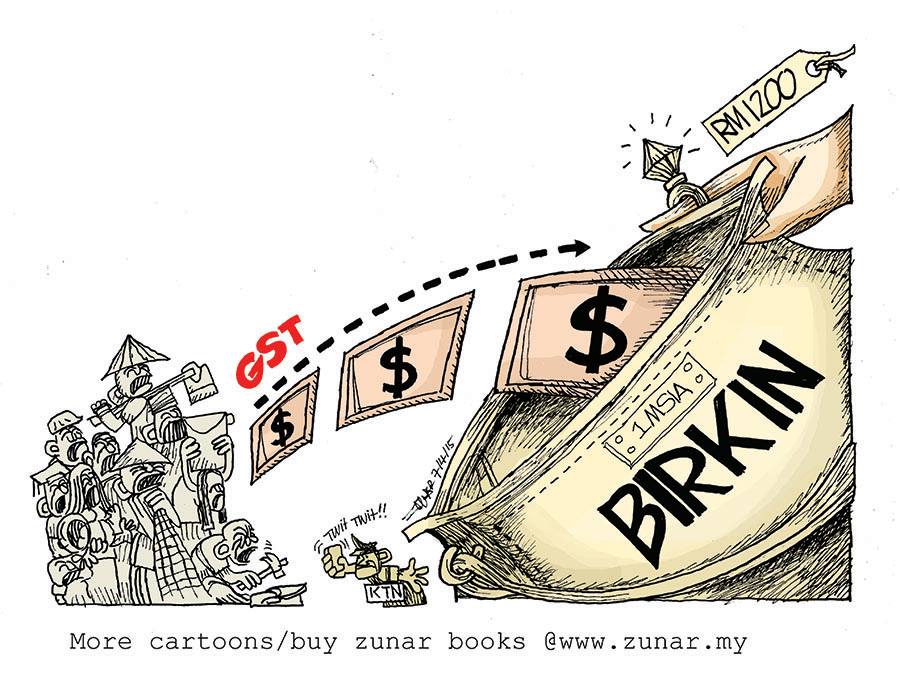 The most recognisable of the lot would be the tiny caricature of a policeman holding a mobile phone – at times a Samsung/Samseng Galaxy. There has been several instances when Zunar labelled the character as “KTN” (Ketua Twitter Negara), making direct references to the IGP himself who had famously said in February 2015 that he was monitoring Twitter for seditious comments following the imprisonment of Anwar.

It was at this period of time Zunar was detained for allegedly making allegedly seditious statements in regards to the trial on his Twitter account. Ever since then, the KTN has become a regular feature in Zunar’s cartoons. No wonder the IGP macam tak puas with Zunar. 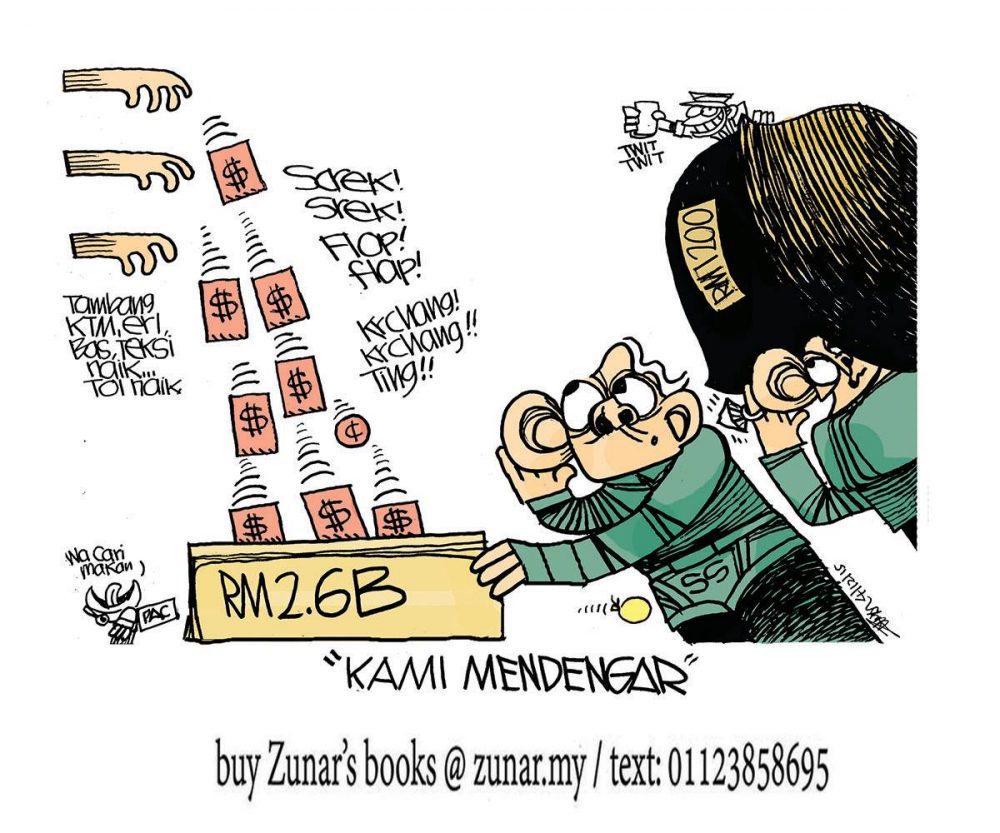 It was in February 2015, when the cartoonist boldly ramped up his mockery of Malaysia’s first lady.

Depicting her with a large price tag on her head while inking her hair darker and thicker, Rosmah allowed herself to be made fun of following a bad public relations blunder at a public held event.

The first lady had allegedly complained of the Rm1,200 spent to dye her hair to those present in her speech. 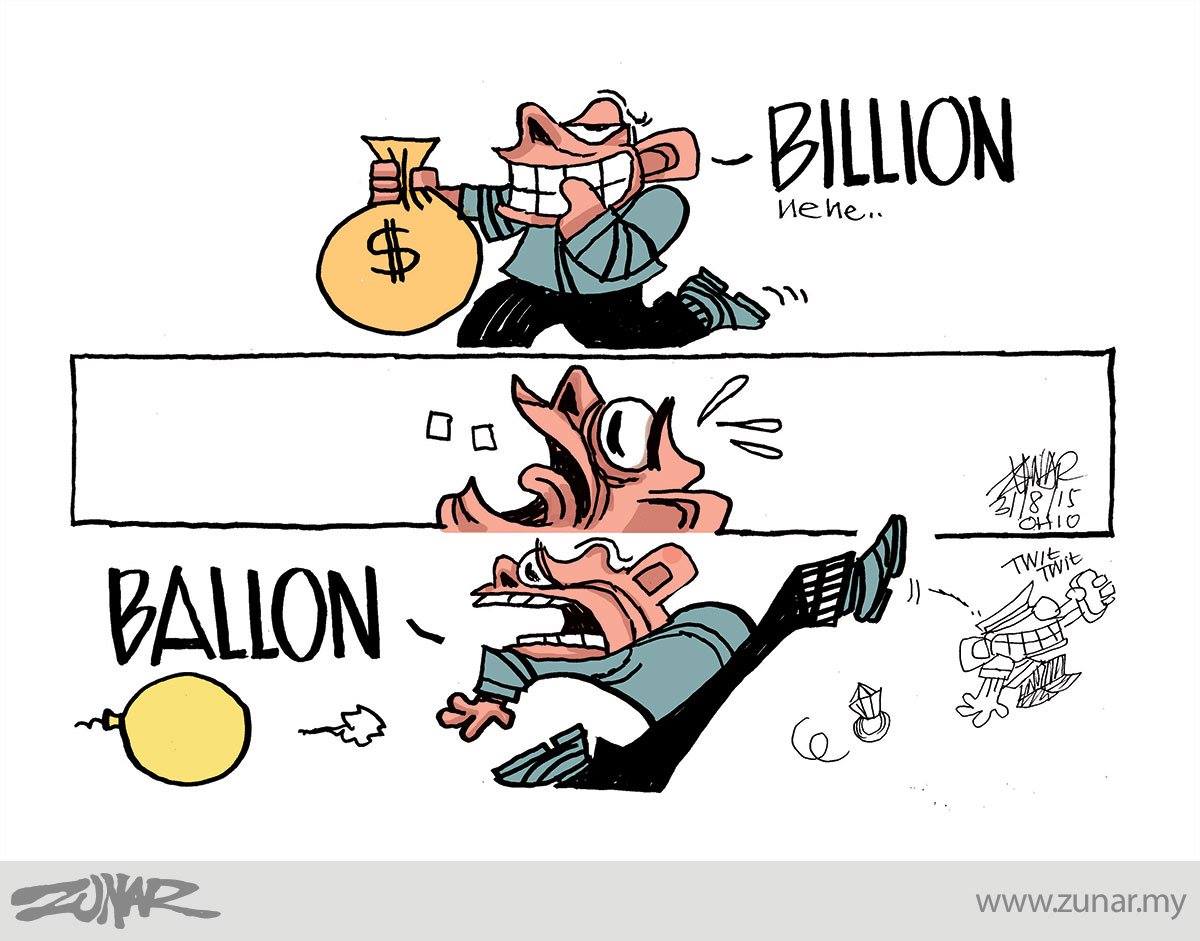 A tiny yellow balloon started appearing when dance activist Bilqis Hijjas was charged for dropping yellow balloons at a public event attended by Najib and Rosmah – one day after Bersih 4 in August last year.

Zunar’s lone yellow balloon, gradually drifting towards both characters initially began as a show of solidarity to the activist who was charged under Section 14 of the Minor Offences Act 1955 “with intent to insult” both Najib and Rosmah.

A year on, the tiny yellow balloon has become a constant feature and a symbol of persistence of many Malaysians who demand a positive change in the country. 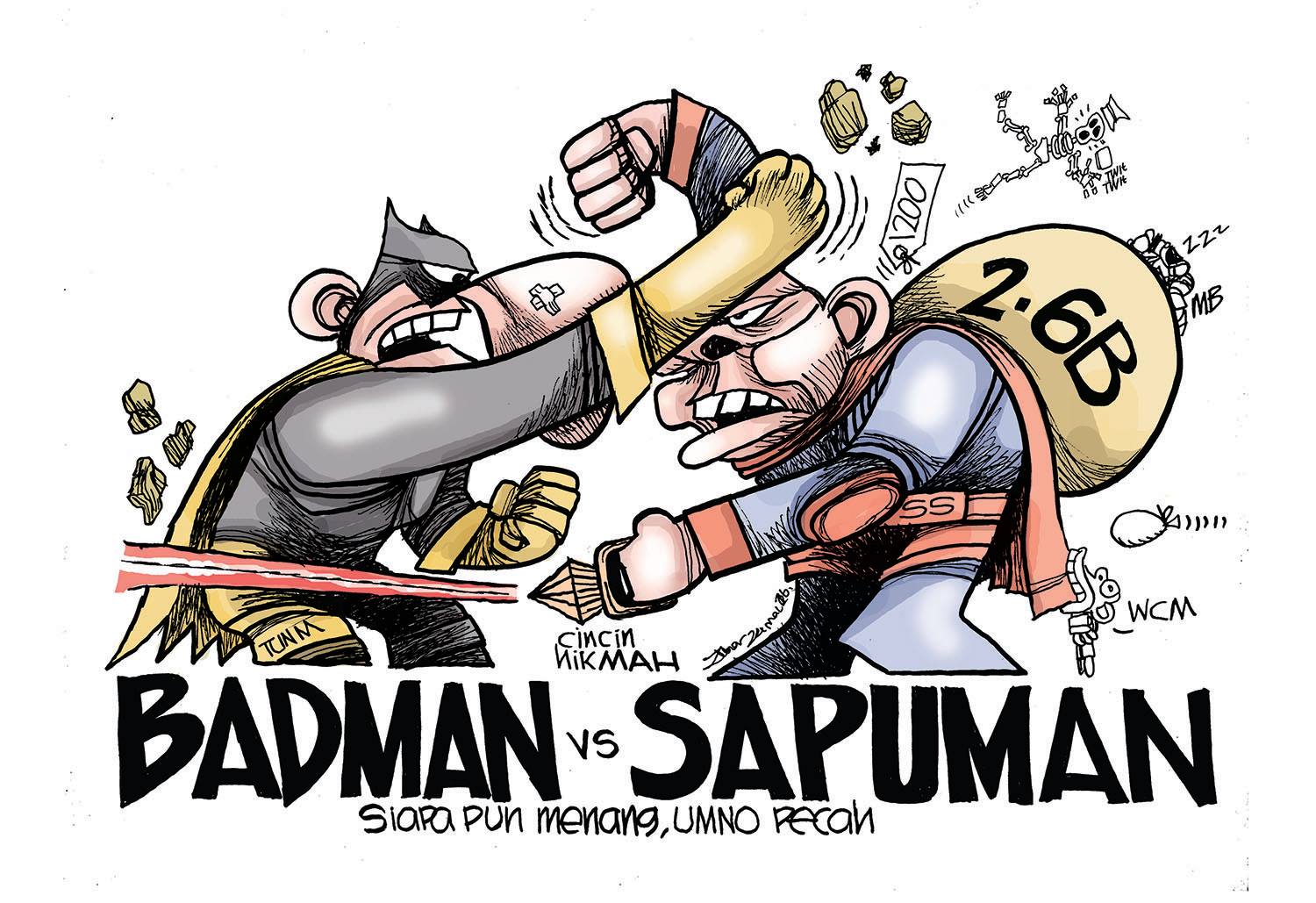 An acronym for “Wa Cari Makan” (I’m just making a living), Zunar began inserting this character into his cartoons November 2015 during the Public Accounts Committee’s probe on 1MDB.

With its tongue jutting out and its mouth wide open before piles of money bags or at times biting on Najib’s clothes or shoes, the character basically symbolises a leech. 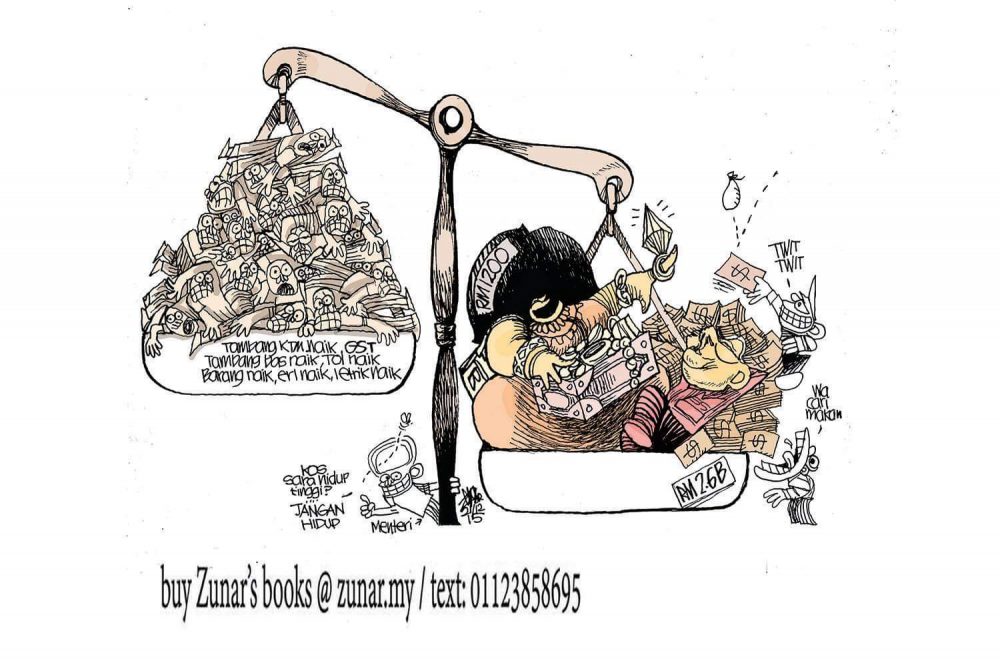 Even Deputy International Trade and Industry Minister Ahmad Maslan did not escape Zunar’s pen in December 2015. Depicted brainless – with a fly passing through his empty head as proof – Ahmad’s character is occasionally drawn dishing out some really absurd suggestions.

Malaysians are well versed with the lawmaker who has been known to make some WTF statements himself when it came to issues that mattered.

Remember the two job suggestion to tackle rise in the costs of living? 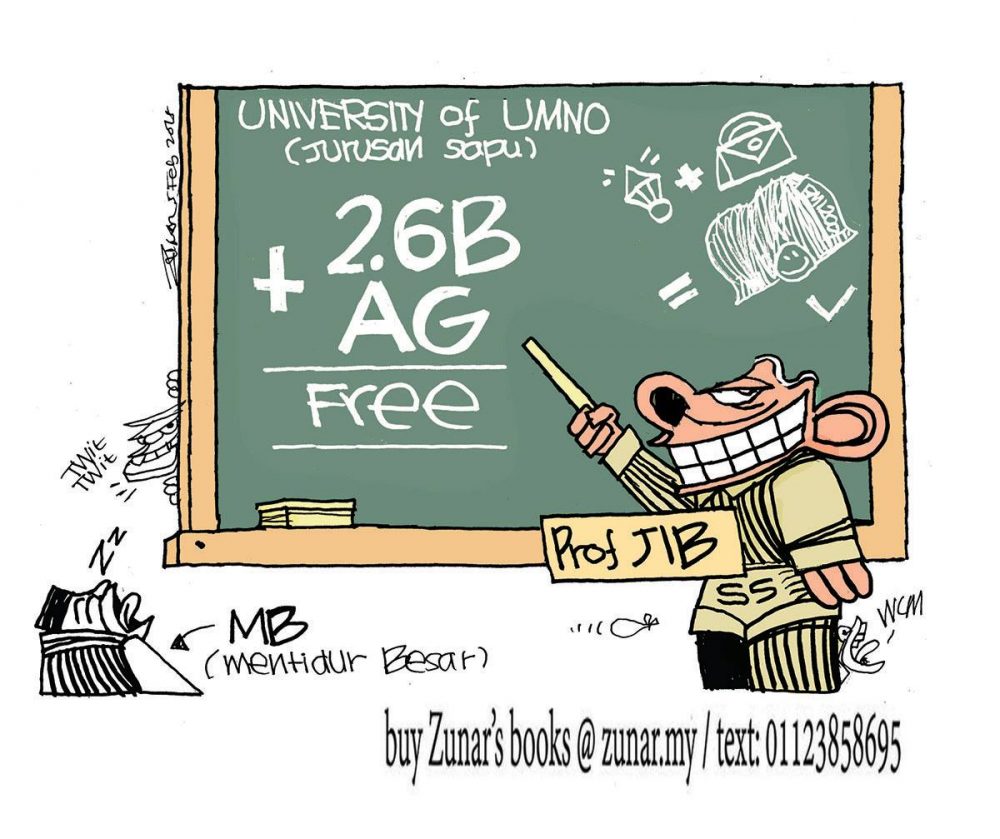 Occasionally Zunar draws a character wearing a “songkok” snoring away while his main message takes the limelight.

Calling it “Mentidur Besar” (Big Sleepyhead) or “MB” for short, the character made its appearance after a video of the newly minted Kedah Menteri Besar sleeping during a palace ceremony became viral in February this year.

Truly, if it comes to a country filled with cartoons, Zunar is the best person to draw them all. One only wonders if he has anymore symbolism up his sleeve.

Follow Zunar on his Facebook and purchase his books via his website. Why do you feel cartoons are offensive and a threat to some? Feel free to share your thoughts by commenting below or drop us your opinion to [email protected]