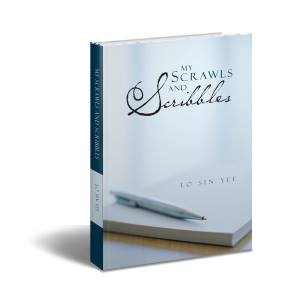 The deafening ringing of the school bell reverberated at every corner.  Before it trailed off into silence, a cacophony of voices and laughter rose around a yellow cat.  He lazily raised his head as hundreds of feet pattered up and down the spiral staircase above him.

A girl squatted down and stroked the cat’s head.  The cat let out a big yawn, showing his sharp teeth and tongue with utter nonchalance.  The girl chuckled and petted the cat’s cheek, just behind the whiskers, her own hair, parted at the centre, dangling from both sides of her slightly pimpled face.

The cat closed his eyes, gradually submitting himself to the touch, enjoying the sensation.  The girl squealed as she ran her hand, kneading the cat’s head to his tail,  repeating it several times.  The cat purred throatily in response to the girl’s crooning.  A few more girls joined in, taking turns caressing the cat in the same manner.  One of them even held the cat in her arms, swinging him from side to side.  When everyone had had enough, they whispered goodbye to the cat and scurried into the crowds that gobbled them up at the foyer.

The cat seemed relieved at being finally left alone.  He stretched out his front paws while letting out a big yawn.  He narrowed his eyes, flexed his body and licked his side.  A light wind blew and he cocked his head in the direction of the canteen.  Food was in the air.  He scratched his neck with his leg and stood on four legs.  Noiselessly, gracefully, and unhurried like a royalty, he meandered towards the canteen.

The midday sun was high in the sky, its scorching rays filtered its way through the flower-filled lattice roof of the corridor leading to the canteen, creating dappled pattern of shadows on the cat.  Oblivious to the irregular, broken rhythm of the feet that hurried by him, the cat followed the scent of food, his shoulder blades rippling to the gentle rise and fall of his gait.

School began as usual…some classes were quiet, others quiet noisy.  Different teachers had different approaches in handling their students.  Most believed in punishment and reward.  Some believed that good discipline could be instilled through well-distributed tasks, while a few had strong faith in addressing problems with love, only to realise from time to time that the students could not be bothered with it.

Puan A taught with a gravity of strictness.  Two Oya was not an easy class to deal with, but she managed to tame the students in her own special way.  Upon entering the class, the first thing she did was check its cleanliness.  This had been so consistently done that all her students had the habit of checking under their desks for rubbish before she arrived.  While explaining the distance between Kampong A and Kampong B, she halted at a stir of noise and waited for the student to come to the realization that he or she was disturbing the lesson.  Sometimes, after the students had finished their work, she told them stories embedded with moral values that easily awakened the guilt within them.  Every time she described a problematic character, her eyes seemed to unwittingly dwell on certain students, making them bow their heads in shame.

Two classrooms away from Puan A, Mr. B, a big, pot-bellied man conducted a group activity in Two Dalton.The students sat according to their groups, discussing how to describe different places in the market. Mr. B approached a group, and found them drawing cartoons.  Frustrated, he told them to stay focused on the task, only to find them giggling cheekily.  Then, he stopped by an other group, and saw only a few sentences on their paper, the very examples he had written on the blackboard, showing no effort to go beyond that.

“Why are the students not serious in my lesson?” Mr. B lamented to himself.  The activity seemed to be a bit beyond the students’ ability, an oversight he had often committed.  Shaking his head, he provided more examples on the blackboard.  The students busily copied them down.  Only one group of boys, it seemed, was really discussing the lesson among themselves, coming up with vivid descriptions that pleased him.  But on the whole the lesson was disappointing.

Just as Mr. B was ready to lecture the students, the bell rang and loud murmurs spread among the students.  Before he knew what was going on, all the students, like frightened rats, scrambled back to their seats.

“What is happening?” Mr. B asked, confused.

“Teacher, our form teacher’s on her way passing our class,” the monitor said.  “She forbids us to change our seats.”

“But all of you are discussing with my permission!”

“Shhh, teacher,” the monitor shushed Mr. B by pressing a finger to her lips.

The sound of a woman walking in high heels approached the classroom along the corridor.  Then Puan A, her beautiful face framed by a green hijab and her petite body encased in a matching baju kurung, came into sight as she passed by the class.  Everyone was quiet until she disappeared beyond the rectangle windows.

A boy looked tentatively out the door and clicked his fingers, and said, “She’s gone downstairs!”

Immediately, noise returned to the class with everyone returning to their respective groups.  Mr. B’s shoulders drooped in defeat.  How he wished he had the authority of Puan A.  With her serious demeanor and firmness, the students would surely take their work more seriously.

Meanwhile the cat, after a filling meal, slept under a table at the canteen.  He curled up his body into a ball and rolled to one side, his tail almost touching his nose.  Two hours crept by slowly, until the blare of the recess bell split the air. The students thronged into the canteen through the same corridor, lining up, pushing, shouting and laughing.  Those who paid for their food enjoyed eating at the tables, the cat weaving through their legs eating the dropped scraps. A dog joined in, circling around the tables.  The cat looked at him with contempt, an intruder!

Mr. B came out of the staff dining room adjacent to the canteen and joined the prefects in controlling the crowds.  From the look on his face, he seemed fidgety, for he had just remembered his duty at the canteen.  He left his noodles barely eaten.  He also kept pulling his shirtfront back and forth for a quick relief from the hot temperature, but it only made him sweat more.  How he wished to pull off the noose-like tie and throw it away.

The bell rang again and in only a few minutes the crowds cleared.  Mr. B returned to the dining room for his noodles, leaving the prefects and canteen workers to do the cleaning.  After the second, or maybe the third round of eating, the cat was contentedly full and had disappeared from sight, possibly having some rest in the garden.

Mr. B ran up several flights of stairs and reached his class panting and puffing. Next door, Puan A was relatively composed, teaching with panache, as she made the most difficult assignments easy for the students.  Despite Mr. B’s efforts, he  failed to sink to the students’ language level; more and more of them began to do their own work, deaf to the teacher’s long-winded babbling.

The final two hours passed very soon, and with the last ringing of the bell, the students walked out of their classrooms in files, making a lot of noise as they headed to the concourse.  There, a female teacher was standing on a platform, the principal and the senior assistant sitting behind her.

The female teacher gave repeated warnings as the students filled the concourse, her eyes bulging and her temples purple with rage.  The students, unfazed, went on talking among themselves, particularly those at the back.  The principal and the senior assistant looked expressionless, as if watching the dreariest show on earth.  The teacher, unable to control her emotion, barked over the microphone and the loud, amplified voice produced a half buzzing, half ringing sound that pounded every eardrum, making most students in the front grimace and cup their ears.

Mr. B, standing with the other teachers behind the platform, was feeling bad for the teacher.  But deep down, he felt relieved that he was not the only teacher having problems controlling the students.  Since he was new to the school, there were plenty of surprises in store for him everyday.

Suddenly, a blur of yellow leapt up on the platform and the sizzling voices came to a sudden hush.  The yellow cat was in the middle of the platform, casting a lazy, untroubled look over the crowds.  Then, in front of where the principal was sitting, he rolled from side to side, exposing the white of his stomach, eliciting sighs and squeals from the students.  When he started grooming himself, everyone broke into laughter, including the teacher with the microphone, totally diffusing the tension.

The cat had saved the day.

After the announcement of important matters, the students left the school row by row.  Before going down the platform the principal picked up the cat, stroked him tenderly, and whispered some words.

“Thank goodness for the cat,” Mr. B said, heaving a sigh of relief.  “I never knew that the principal loved cats.”

“How do you know?” Mr. B asked, quite surprised to hear this.

“Haven’t you noticed that the cat has a red collar?” said Puan A.  “He adopted him three years ago, even naming him Fitri.”

Mr. B looked dumbly at Puan A as if unable to digest the truth.  Suddenly, he realized that the cat and Puan A were quite the same.  They did not have to shout at the students, but won them over with their grace and dignity.