The dry leaf fell onto the page of the book held in my hands. My heart leapt a little and I tilted my head to the sky. I flipped my front hair sideways as the gentle breeze of air touched my skin. From beneath the shade, I could now see a better view of the big deciduous tree, firmly trying to hold on to its rainbow leaves. Its hues of bright green, yellow, scarlet and amber blended perfectly.

My eyes glimpsed to the right, catching the sight of passers-by along the tranquil park. The Northern Red Oak, Boston Ivy and Mountain Ash trees were standing graceful as if they were welcoming our presence. Some were comfortable with being by themselves, and some I perceived, were lovebirds walking with swinging arms. I observed kids laughing and chasing each other. I saw an anxious man carrying a bunch of roses, and I admired an elderly couple enjoying their picnic basket together. My view was later ushered to another corner, where a young girl was stroking a
paintbrush on a plain canvas. The pieces of comfort, serenity and happiness were connected and framed into one place.

I put aside the leaf to be used as a bookmark later. On the left, my little boy was resting upon a rustic wooden park bench, amused by his vibrant toy car. I leaned my head against his soft, golden brown hair and kissed his fluffy cheek. He had that quizzical face, but responded with a cheeky smile. At that moment, I could feel as if I had escaped from the ordinary.

I gazed at a 6-foot tall man mounted in front of me. He had a shoulder-length wavy brunette hair covering his chiselled face. I scanned him from top to bottom without blinking. I admired his
appealing outdoorsy outfit — an olive green scarf, a rustic sand shade jacket layered over a grey casual shirt, a faded Cambridge blue denim pants with classic corduroy boots.

He threw a pleasant dimpled-smile. His eyes twinkled.

“Hey, you okay?” His husky voice broke the silence.

“His name is Aidan.”

“Oh, what an adorable name. Care to spare me a seat with Aidan?”

“No.” I gazed at him. “Listen, I don’t speak to strangers. Don’t use my little boy as an excuse. Don’t try to be friendly. A man with a beautiful smile could also be a serial killer who smiles
over a dead body.”

He paused for a moment. Ignoring my bristled warning, he continued smiling.

“Aidan is lucky to have a wacky, overprotective CSI agent in his life while he plays with his toy. I’m Harry by the way.”

With a straight face, I pretended I didn’t hear a thing and let his words be swept away by the breeze. He turned his head lightly.

“Have a good day, see you again. That’s a great book you are reading. Excellent pick!”

He strode across and disappeared through the leaves carpeting the sidewalk.

Disappointed, I stared at my book. It’s better to let someone walk away from you than all over you.

Months later, we were getting ready to go for a weekend lunch gathering at my mother’s Summer Lake House. We gobbled some pancakes with cranberry sauce for breakfast, but I still packed plenty of snacks for the 5-hour journey. A faded photograph tacked on the fridge stole my attention while packing. I paused, but then chose to ignore. I hauled the excessive bags towards the car, only then comprehending it was just the two of us. Unessential things were brought together since it was no surprise we would become overnighters again.

I kept the estate car at a steady speed along the one-way road. As I steered around a junction, words from the scribbled photograph re-appeared in my mind. The faded and dusty photo had been on our fridge since years ago. It was a picture of Bradley wrapping his arms from the back across my shoulder as I was holding a baby against my chest.

On the photo, it was written: ‘For the love of Adrienne and Aidan.’

I pulled over to an empty parking lot near the ancient bookstore about an hour later. It was located in a district filled with many memories that I tried to relive. It had been ages since I had last met the smoky greyed-hair man, Glenn. I would always portray him as the hippie version of Albert Einstein. He had inherited his family’s wealth of knowledge living in that century old bookstore.

A year ago, Bradley and I were there practically every other day. For the most part, we isolated ourselves into different ‘worlds’ — Brad on his eccentric collectables of literature and photography, while I would be the patron of the non-intellectuals, self-help or romance sections, and sometimes just admiring the vintage collections in the display cases. In the end, we reunited on the Persian rugs with hot Macchiato while striving for intelligent conversations with Glenn. The classical symphonies in the background, the silhouetted risen candles and the decorative wisdom quotes on the walls were all wrapped up in a room full of antiques and curiosities.

We were somewhat destined to be glued at the almost-abandoned shop, even though there was no air conditioner. We bonded over the mutual love for the smell of the rare collections of creased-binding books. It always felt comforting and Glenn was like my own father.

“Aidan, how’s my little boy doing?” A sudden voice cheered as I pushed the creaky door.

Aidan sneaked in behind me.

“He’s being a shy bird today, Glenn,” I smirked. “Hey there little birdie, why don’t you go say hello to Papa Glenn?”

“Heeyyloo Papa Glennnn,” Aidan shrieked and marched right up to the bay at the children’s section. Glenn chuckled to himself.

“I’m doing okay so far, planning to visit my mom soon. By the way, she was looking for an old classic, Don Quixote. Do you happen to have it?”

“Let me check it for you Ade. And oh! Take a look at my son’s book on the side shelf near the entrance. It was recently published.”

“Wow, I didn’t know your son was an author! How long has he been writing?”

There was no answer. Glenn had walked along the aisle down the middle heading towards a storage room. I dragged my feet to the wooden shelves. There was a sign at the corner displaying ‘New Release’. I didn’t know which book Glenn was referring to since there was a huge selection stacked on the shelf. I picked up a blood-red paperback, the title of which I might have recognised but had never thought much of.

‘THE PECULIAR AUTUMN’ by Harry Jefferson.

I turned to the back blurb of the book but wasn’t interested to read. I flipped through the first few pages.

On the dedication page, it was written: ‘For the love of Adrienne and Aidan.’

My heart skipped a beat.

After the long tiresome journey, I became a walking corpse but decided not to be a grouch in front of the guests. Aidan had fallen asleep so I had to carry him. The small cabin of the Summer House had a balcony that fronted a serene, shallow lake. As I opened the window, the wind rushed through my hair. Nature, a thing of pure beauty happened to be the best company for me.

I wandered through the kitchen to find my mum and several other relatives whose names I always have had a hard time recalling. I rested myself on the uneven bumpy bench outside the doorway while observing the other guests. My Sherlock Holmes brain indulged through the pillowlike clouds. I kept thinking about the mystifying red book, but somehow or rather, I wasn’t able to decipher the puzzle.

“Mom, here’s your book. It was a tough catch, you owe me big time. I had to murder someone for his Don Quixote.”

“Well, this is one book worth getting killed for.” She mocked. “Did you managed to get in touch with Brad?”

“No. Although I’d wish he was murdered for this.” I was almost playing the devil’s advocate.

“Ade, quit with your attitude. We’re expecting unfamiliar faces today. Last fall, they came here for their Writers Residency Program. I needed some extra money so I had to do what I can.”

“Okay, I’d rather be hiding in the nest with Aidan.” I stepped back into the house. I wanted to investigate the content of the book in my hand.

“Mrs. Donovan, nice to see you again,” a man greeted my mother from across the hall.

“Ade, come and meet Harry. He came here before during the residency program, and we were talking all about you.”

My attention was drawn to the sight in front of me. Our eyes intertwined and it was the first time in my entire life that I could feel my blood flowing through the vessels at the speed of light.

“Glad to see you again, Adrienne. That’s a great book you are reading. Excellent pick!” He smiled, and then laughed at me.

The same smile, and the same words from the park — the peculiar ‘serial killer’. 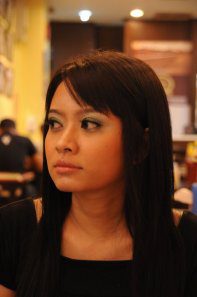 Farahrina Ali is an introverted Sith Lord who enjoys coffee with a good book, quotes, backpacking and alternative rock music. Occasionally rambling at farahrinaali.com
Are you a writer with works of your own to share? Reach out to us at [email protected]