*** This was a short story which was performed by Mary Maguire at PARI PARI DI klpac on February 24, 2018. It was so awesome that we decided to publish the entire story/script here!

INTRO: Pot Head Pixies by Gong – fades out after 20 secs

AND in the early hours of that same day
In a small council house in Manchester
A female child – who had spent the previous 5 days deliberating
about whether to be born, or not
finally was
and she was aptly named Mary

There were some bigger fairies
that used to hang out near the foxgloves
who would play peekaboo with her
They were very shy so she never got to see them up close
and soon, she lost interest in them

They were her best friends
and confidents

Despite being one of the most loquacious children
ever
she never spoke about her adventures to anyone.
But she never forgot them

She began to think about her fairy friends less and less.
Although she did still go and look for them from time to time,
when she was feeling sad or lonely.

Finally, when she was seven
her family moved to a slum area
where the only flowers she saw were the rosebay willow herbs
growing on the still uncleared bombsites

Her connection to her magickal garden was severed

Surprisingly she didn’t miss it
Her natural curiosity was being satisfied by school
and she became a very motivated – if somewhat opinionated pupil.

That phase didn’t last long!
Along came the swinging sixties
full of revolutionary ideals,
rebellious beliefs
and of course, sex and drugs and rock n roll

Apart from falling in love for the first time,
The only tangible magic in this period of her life was that she
didn’t OD,
she didn’t get pregnant or catch an STD
AND she even managed to get her degree!

But there was always something missing

Then wham bam
out of the blue
a bolt of magick struck that changed her life
forever.

It was June 11th 1987.
There was a low-pressure system hanging over the UK
bringing cool temperatures, showery skies and thunderstorms.
This was also the day when the camel’s back was finally broken
When Margaret Thatcher was re-elected for the third time!!!!

The trigger to radically change her life had finally been pulled

9 months later,
having packed up her life and said goodbye to family and friends
she emerged from the arrival hall at Subang airport
and immediately…

I spent quite a few months travelling up and down the east coast
soaking it all in and regaining my youthful wonder of nature.

I began to find myself musing about what language Malaysian fairies
communicated in.
Was there a global fairy dialect?

In 1989 a new and similarly crazy friend, know to many as Antares,
introduced me to the Sg Chiling in Ulu Selangor

Long story short, a small group of us ended up renting a house overlooking the river with the purpose of establishing a community of artists…
It was paradise.
The child was awakening
magickal things began happening

Our nearest neighbours were a small tribe of Temuan Orang Asli
They lived in a small village on the next river and used to stop by for tea
on their forays into the Chilling area.

From them I heard stories of nagas,
orang bunyan,
langsui
and white spirit crocodiles.

It was early evening and I was bathing in the river before night fell
when I suddenly felt I was being stared at.

There about 100 metres in front of me was a figure sitting cross-legged on a rock.
At first I thought it was one of our gang
but when I looked closer
I realized that this magnificent creature had the head and torso of a man
but the legs of a goat, or some other hooved animal.

“Pan”
No sooner had the name escaped from my lips – he was gone!

On another occasion,
while walking along a jungle trail at twilight with my friend Mak Minah
I heard a captivating call coming from the nearby clearing.

“Listen, there it is again”

I finally got the hint and turned to rejoin her on the trail
Suddenly, the ground was literally pulled from under my feet…
You know…
The way magicians remove tablecloths without disturbing the tableware

“Don’t be deceived by these spirits, they will entice you into their world.
And don’t EVER say my name out loud in the jungle again!”

Back in the days when Minah was still alive,
the Orang Asli village sharman, Sudin,
used to conduct healing ceremonies
and once a year there would be a 3 day event called a Sawai
during which the Orang Asli renewed their kinship with their ancestors
and all of the nature spirits.

The first Sawai I went to was for Minah’s younger sister Indah, who had been sick a long time.
Sudin decided a Sawai was in order to ease her troubled spirit.

This was my first non-drug induced trance experience!

It was almost instantaneous – as soon as Sudin began calling the spirits
I felt connected to a tribal frequency that was
oh so different
and yet, at the same time
very familiar

Once I was filming a Sawai for a documentary. It was being held in Indah’s house
and had been decorated with fragrant leaves and flowers from the jungle
to represent the forest.

As soon as Sudin started calling the spirits
I felt like someone had thrust a dagger into my solar plexus
I keeled over in pain
but managed to stagger outside where I lay in a fetal position.
Suddenly a voice …

“Go back inside and you’ll be okay”

The instant my feet crossed the threshold I felt the energy leave me.

“What leaf????” This is the first time anyone’s told me about a leaf…”

Sudin later explained:
“The leaf makes you invisible to the spirits,
that’s why they come to me”

Ah!
He had ‘seen’ the spirit enter me,
but before he could call it out, I had disappeared outside.
He said that the spirits are shy and won’t appear in the open,
so the only way to release it was to get me back inside the house

And the voice?
Sudan said it was that spirit whispering to my spirit.

In those days I used to hang out a lot with my now departed friend Chief
who had been a part of the Magick River community since the beginning.

One day we were returning from Kuala Lipis, after dropping some visitors off
when we passed an elderly gentleman walking by the side of the road.
It was around 2am
and we were in the middle of nowhere.

“I wonder if he wants a lift?”

Chief quickly turned the car around and we got out to talk to him.

He was dressed in old shabby clothes
and was carrying two plastic carrier bags which appeared to be full of rubbish.
Speaking in an old form of Malay, – which I couldn’t understand at all –
but Chief managed to figure out
He told us that he was returning from officiating at a wedding
and gesticulated into the distance.
He told us he didn’t need any help at all
assured us he was fine
and thanked us for our concern.

While we were chatting to him, a young man on a motorbike approached. He too stopped.

Now,
I was standing facing the road
and could clearly see the young man’s face.
Chief was one my right <gesticulates>
and the old gentleman on the left.
And as the conversation progressed I could see the motorcyclist was becoming more and more agitated…
Then I suddenly realized he couldn’t see the old gentleman at all
He must have thought he’d happened upon a right pair of loonies who were talking to thin air…
He got back on his bike and took off at some speed.

I don’t know for sure if it’s connected,
But on the drive home,
whenever we spoke about the old gentleman
an animal would appear by the roadside.
First it was a young clouded leopard, then a mongoose…

Some might say I’m crazy
And maybe I am
But I have learned that magickal things
can and do happen
if you reconnect with your childhood innocence
and pay attention.

In fact, I had another powerful encounter with magick only last month
Which is why I’m here today
But that’s another story, entirely.

As this is the inaugural PARI PARI DI klpac,
I have been given permission from the Council of Faeries to grant each and everyone of you your most desired wish.

But you must close your eyes.
Cover them with your hands if you think you might peep.
Otherwise, this fairy dust <holds up a small bag >
will sting your eyes.

Now think of something that makes you feel happy:
Gazing into your beloved’s eyes
Puppy dogs
Nasi lemak
BN loosing the next election….

Rings fairy bells and scatters dry, fragrant rose petals on the floor around the audience
Hides from view

Okay the spell is cast
You can open your eyes now 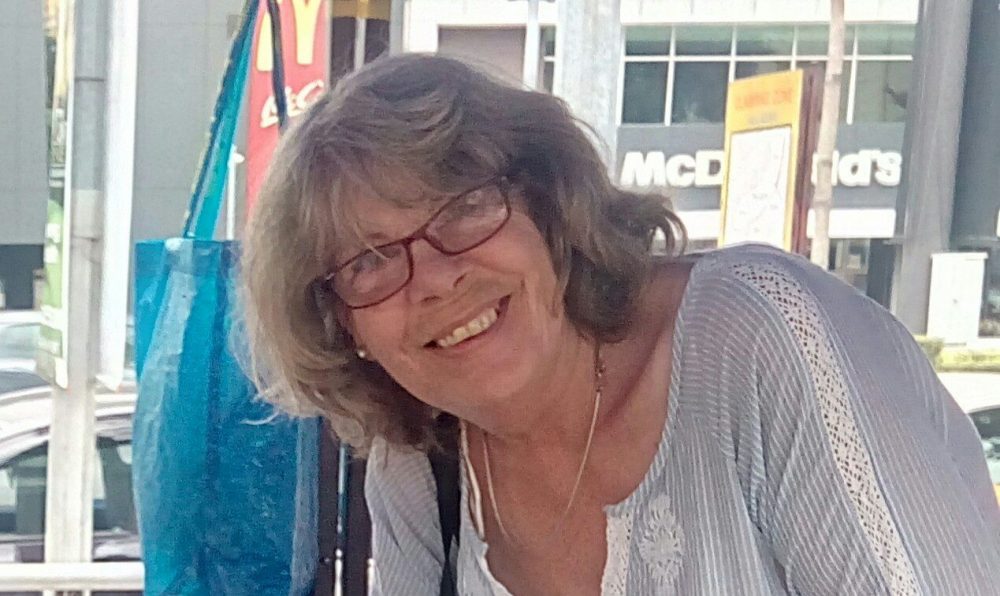 Mary Maguire is a slightly crazy lady who’s been round the sun more times than she likes to admit and has had a lifelong connection to fairies and all things magickal.