Since my father was taken ill, I have been taking a school bus to work.  Every day, I have to wake up very early in the morning, do my ablutions in a half-asleep fashion before waiting outside the gate for the bus.

Surrounded by darkness, except for the dim street lights, most of the residents are still in slumberland. The morning air is cool and the stillness is occasionally punctuated by the sound of housewives stir-frying rice and the slow trickle of traffic plying the road in the dis­tance.  I stand drowsily at the gate, watching my dog scratching itself as the time creeps by. At 5.20 a.m, the sleek outline of a school bus, heralded by two flashing, yellow orbs of headlights, looms large at the junction to my neighbourhood.

When the bus stops at my gate, I heave myself on board.  Mr. Teo makes sure that all the bags are consigned to the boot so everyone has space to sit.  Despite the fact that I am a forty six year-old teacher, I receive the same treatment, so I cram myself in the front seat with a boy nearly my size. I give myself more room to move by winding down the window and hooking my arm over the sill. The wind whips my hair and my drowsiness ebbs away as we make the circuitous journey to school.

To make sure everyone reaches school on time, Mr. Teo, the driver wastes little time in picking up students.  A tall, wiry man in his early sixties, he bought the bus for his wife, but, perhaps due to the additional pressure of driving children to school and raising four children of her own, she abandoned him and the children.  The situation compelled Mr. Teo to quit his job as a mechanic and for twelve years, he has been driving that bus and raising the four children single-handedly.

On rainy days, the bus runs more slowly. Drops of rain are flicked off by the windscreen wipers, but they are useless in preventing the window from misting up on the inside. Both the driver and I are kept busy wiping the windscreen with rags, but a new mist will quickly replace it. Through the falling skeins of rain, Mr Teo strains to look at the traffic ahead.  Sometimes he overshoots a house and has to drive back to pick up the student. Overall though, Mr Teo is a compe­tent driver behind the wheels.  One time, a pick-up nearly grazed the bus, but Mr. Teo, keeping a cool head, swerved steadily, just in time, to avoid any damage.

As we plunge further through the early morning darkness, the residential outskirts gradually give way to an industrial area.  Two more concerned mothers see their children board the bus. Then we pass the old Sarawak Energy building in a blur.  After negotiating a roundabout, the school bus trundles into Krokop, another cluster of residential areas, to pick up two girls.  Meanwhile, pop songs on the radio keep us entertained.  Many students tap their toes and bob their heads to the rhythm of the music.  Mr Teo, his hands skilfully manipulating the steering wheel, hardly speaks a word to me, not letting his concentration stray.  For me, being taken daily on a drive to and fro school along the same, well-beaten routes is boring, but to the driver, this is his main source of income so he takes it seriously.

Upon arrival at the school gate, the dark inkiness of the sky has already given way to pinkish-blue by the rising sun, and everyone seems to be jolted from a trance. I reluctantly open the door and get off the bus, steadying myself for a new day of challenges ahead.

At school, the students ask me why I come to school on a school bus.  Upon learning that I cannot drive, their faces light up in amusement.  To them, my presence on the school bus seems incongruent, if not comical; they see me as a misfit!

A colleague asks, “Do you help the bus driver to roll call and discipline the students?”

“No, Mr. Teo has his own passenger code of conduct,” I reply.  “He’s in charge of everything.”

I am only a passenger, and it would be impudent of me to interfere with the way he manages the students. A stern-looking man, the mere turn of his head is enough to silence any commotion or noise behind him. Whenever another bus full of jeering students overtakes us, our young passengers hardly react to it, submitting to the authority of Mr. Teo.

One day Mr Teo’s bus was stolen.  To take us to school he drove a friend’s van.  Due to its limited space, he drove some of us to school first and the rest later.  We all made it on time.

To trace his bus, Mr Teo informed his friends and the public via text messages and Facebook.  He made a police report, but an officer told him to accept his fate, so little was done.  Disappointed, he took it upon himself to search for his bus everywhere in Miri, even as far as Bakam and Sungai Rait.  His unyielding spirit was finally rewarded when he found the bus parked under a coconut tree in Lutong, its front engine and its left sliding door missing.

“The repairs are equal to what I earn for three months,” lamented Mr. Teo.  “The police actually disallowed me to send it for repairs on the grounds they needed to inspect it but I couldn’t wait anymore.  I depend on the bus for a living!’

While waiting for school to be over, Mr Teo and the other drivers chat as they puff away on cigarettes at the bus stop.  On certain days, when my last periods are free, I leave school early and join the drivers, whose conversation mostly revolves around the art of school bus driving, the school bus association, their families, the students, and, of course, politics.  Compared to the other drivers, Mr. Teo has the least driving experience, but his good driving skills compensate for it.  As keen observers, nothing seems to escape the drivers.  They know where illegal workers gather, where truant-playing students hide and the foibles of different parents who park their cars outside the school, some­times blocking their way.

A few weeks after Papa was admitted to the hospital, I depended on my older sister to take me to school, but since she needed to look after Papa, I had to look for alternative trans­portation.  One of the many drivers I approached was Mr Lai, an elderly man and Papa’s schoolmate.   Always sporting a cap, Mr. Lai is a gem to society.  On his bus only a few students are monthly-fee-payers; the rest pay him a daily fare when in need of his bus ser­vices.  Ever since the public transportation routes have changed, there is no bus plying the area where my school and two others are situated.  Those with­out transport greatly depend on him.

Several times in the past, Mr. Lai had taken me to and from school when Papa was tied up with work.  Before, it was convenient for him, but upon learning I had moved to Vista Perdana, beyond his usual routes, he suggested I contact Mr. Teo.

Several minutes after the final bell has rung, the bus gradually fills to the capacity, a fug of body sweat and odour. As the bus rolls steadily along the road, bursts of wind pour into the coach through the windows, bringing freshness to the sweltering afternoon air.  On the way to school, Mr Teo is a man of a few words, but on the way home, he breaks into a conversation with me as if wanting to release the pent-up stress from his day.  During one of those ex­changes I got to know more about his relationship with his wife.

“Mr. Lo,” Mr. Teo revealed. “My wife talked to me on the phone yesterday.”

“No way,” he said emphatically, resoluteness writ large on his face. “She left the kids when they needed her the most. I have been raising them well with my own hands.  Besides, some of them will soon have a life of their own. We don’t need her.”

Inevitably, like the rainy days and the hot, stifling moments of waiting after school, our patience is retested whenever the bus is caught up in a traffic jam.  Crawling almost to a standstill, the wind stops blowing and everyone’s back relapses to a slick patch of sweat.  The students on the bus are getting increasingly restless, constantly fanning themselves with their books, but Mr. Teo is composed, not cursing like some drivers. The jam clears and our spirits perk up as Mr. Teo steps on the gas, propelling the bus forward. Soon it is speeding along the road, the wind whistling gleefully in our ears. In my mind, I scream out, “Let it rip. Let it rip!”

Upon approaching where the students live, Mr. Teo slows down due to the many stops and turns.  One by one, the students are dropped off at their houses, their parents standing at the gates, welcoming them home.  My stop is still a long way off and  the droning engine of the school bus gradually lulls me to sleep. When the bus stops at my gate, Mr. Teo shakes me awake.

“Thanks for waking me up,” I reply, embarrassed, rubbing my eyes.

“You always drift into sleep on the way home,” says Mr. Teo.  “Care to go for a morning jog with me this Saturday?  It gives you energy.”

“Thanks,” I reply, though I often wake up late on weekends.  “I will think about it.”

After dropping me off, the bus reverses and pulls back onto the road.  Before I can shake off my sleepiness, the bus has turned right at the junction and disappears from my sight. 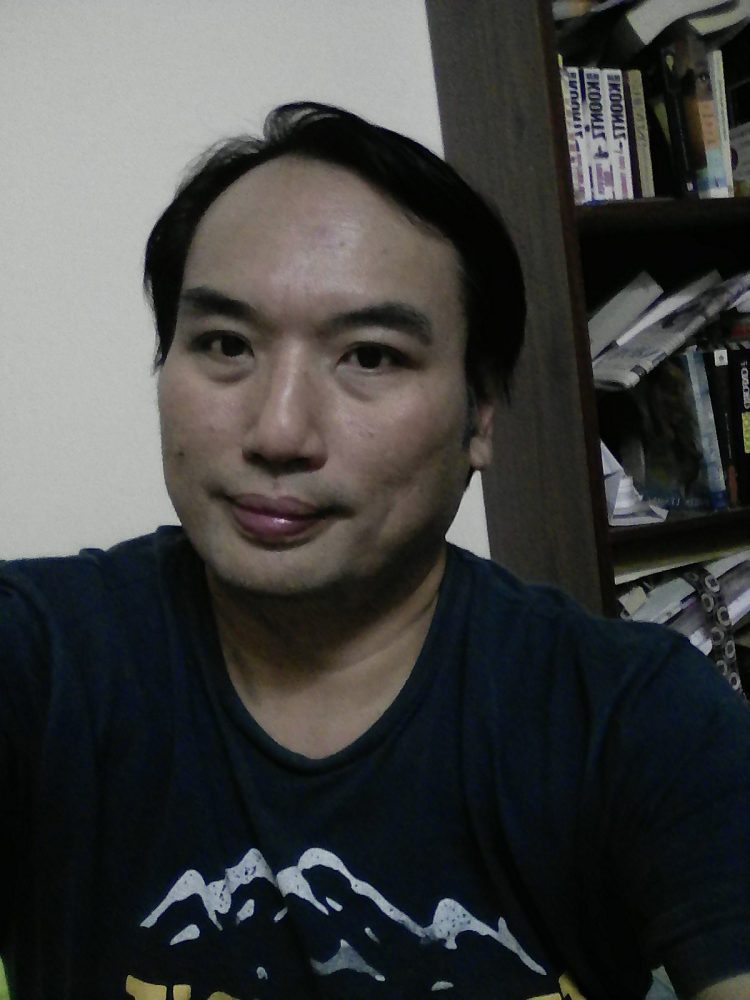 Lo Sin Yee, a secondary school teacher in Miri, decided to give himself a shot at writing after an American tourist had convinced him about its life-changing benefits. To pursue the dream, he started a blog and crossed paths with many well-reputed bloggers, who shared with him a lot of useful tips. For the past 8 years, he has attended a number of writing workshops, and the feedback from different writers and editors has greatly inspired him. Sin Yee loves to write about those who are seen as the underdogs in society, on the strength of their being more original. His first published work is a writeup on Hunan, China, in the New Sarawak Tribune and once, to his thrill and delight, an article of his on an Olympic gymnast was featured in The International Gymnast Magazine.

Enjoyed this short story? Read more here! Are you a writer or a poet? Share your stuff with us at [email protected] Do include an image (or art, if you’re shy) along with a short bio of yourself.
Tags: Jed Villejo, Lo Sin Yee