Malaysia’s book publishing industry has been looking to leverage social media to continue thriving despite being hit by pandemic restrictions.

While the likes of Twitter, Facebook, and Instagram are the common channels for various brands and communities to create buzz, Twitter Spaces has recently been observed to attract a growing interest among the indie crowds of Malay literature authors and enthusiasts.
Copied and pasted from Eksentrika.

Twitter has become the new place for book enthusiasts, especially millennials bookworms. In a word, it’s merry! Almost everyday, there’ll be discussion on Spaces discussing a variety of genres around the world of book publishing. – Raiha Bahaudin

Raiha Bahaudin, the author behind Kunang Pesisir Morten, had taken to Facebook to remark the popularity of Twitter Spaces and her sentiment was picked up to be highlighted by FIXI founder and managing director, Amir Muhammad. 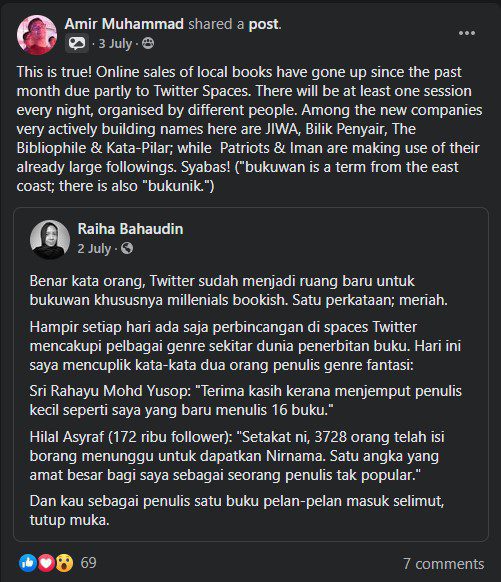 “Online sales of local books have gone up in the past month partly due to Twitter Spaces. There will be at least one session every night, organised by different people.”

Eksentrika decided to explore this phenomenon further, by joining several Spaces sessions and speaking to key players in the local publishers and authors scene.

What we found is that there are several ways authors, publishers, and book lovers alike, can benefit from Twitter Spaces.

1. Engage and connect meaningfully with readers.

In joining one of these Spaces, more popularly referenced in the term, reruang by the Malay literature lovers, we found a wholesome community eager to interact with one another.
Iman Danial Hakim of JIWA, hosted one session, with the prompt, “What is the comfort book that you turn to at life’s low moments?”

Many readers shared various book titles from not only Malay but also English book titles.

At its peak, there were more than 200 listeners, with a dozen or so speakers taking turns to share their stories.

JIWA director, Hafizul Faiz said depending on the topic of the day and the personality roped in for a Spaces session, the average listenership for their fortnightly sessions ranged between 200 and 500 active participants.

Out of that, 10 to 20 would be actively sharing their ideas and opinions.

He said picking relatable topics to engage with readers is key to attracting a volume of participants.

“JIWA’s focus during our Twitter Spaces sessions is to build a connection between books, readers, and self-growth topics.

“Our listeners join because they want to know what content we’ll be offering in our upcoming published books, or sometimes just to chill with us.

“Recently, we held a Spaces session to discuss the concept of a quarter-life crisis, and it received a lot of listeners because our fanbase could relate to the topic.

Amir Muhammad and Julie Anne, respectively FIXI’s managing director and creative director, said the pandemic limited opportunities to organise meet-and-greets with authors. Getting on Twitter Spaces was a nice alternative for readers to talk with authors.

“I think they join us for the sense of inclusivity our listeners get from joining our sessions, discussing casually on anything under the sun that’s related to books.

“For our hardcore fans, they also know that we love dropping hints in our sessions.

“In a session last March, we “shilled” the fact that Shaz Johar would be releasing a book in June. That gave them a sense of anticipation, which encouraged them to keep coming back to our next sessions!” said Amir.

2. Gain inspiration for the next book and marketing plans.

Both FIXI and JIWA use their Twitter Spaces as an opportunity to gather input from their fans to better understand their audience and tailor their marketing style and product accordingly.

Julie says by engaging their audience in questions or topics in these sessions, listeners gave valuable input on what they enjoy and the types of books expected from FIXI’s label.

“Although primarily, we’re sharing information with our fans, their feedback helps us to generate some ideas for what we can make and bring to our fans in the future,” he said.

Hafizul on the other hand stated there were benefits in understanding JIWA’s readership better and being able to promote and advertise directly to their intended market audience.

“As publishers, knowing the type of most sought for content is helpful for planning future books and marketing direction.

“It’s time for books and the literature community to move beyond and not merely stay as words on a page.

“We need to have more vibrant verbal discussions. Books should be talked about, discussed, and debated on.”
Copied and pasted from Eksentrika.

Indie publishers also revealed that hosting Spaces sessions helped them to increase their social media following and promote some books.

“We want them to communicate their ideas rather than just sell the books in a live setting.

“We did see a significant increase to our follower count and our “Mengopi Puisi” Spaces series did help to promote some books such as Daftar Kata Bara, a compilation of our latest three poetry books but the sales numbers were not that significant.

“From a popularity perspective, JIWA has grown to more than 1,000 followers in a week.

“From total sales, our Buku JIWA Set Box that we’ve been promoting has been our top-selling item, compared to our other books. 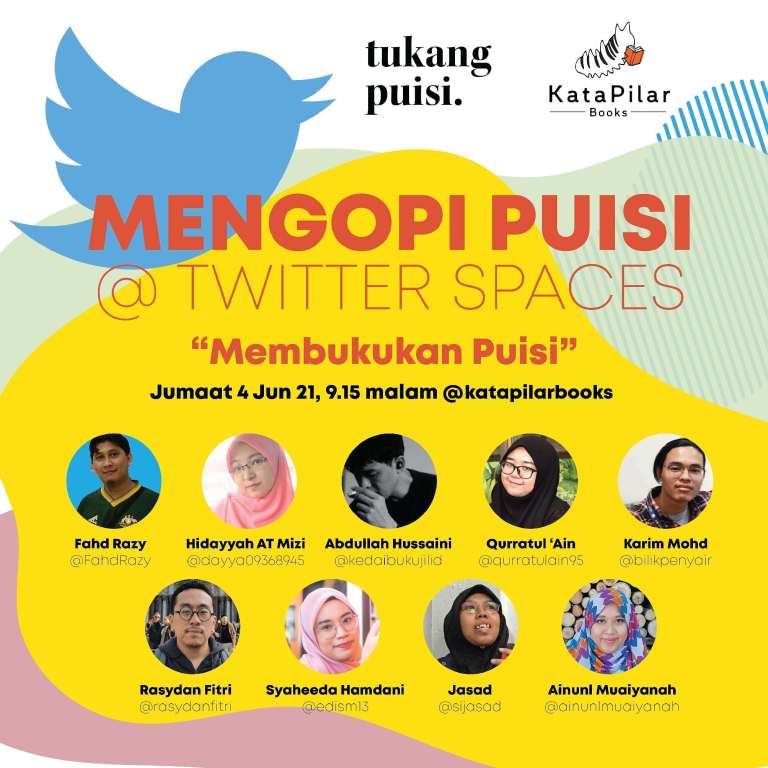 Julie said for indie publishers, gaining new followers meant it was also an opportunity to promote the books that they have published.
“It doesn’t have to be new titles, it can be older books that may not have received attention before. After all, books don’t become dated; they’re timeless classics.
“Besides that, publishers can use this platform together with writers to build relationships with readers and to create a sense of loyalty and friendship.

He shared that FIXI’s Kelantan horror novel, TELAGA by Khairi Mohd, had gained book sales despite a lukewarm initial response.

“The book didn’t receive that much attention when it was released in early 2020, being eclipsed by the release of six other books.

“But recently, when we invited the author to discuss the book and his experiences in a session; that night, we had 30 orders, for a session that only 50-60 listeners attended!

“A more concrete example we can give is with Shaz Johar’s latest book, KOUGAR 2.

“It was announced in mid-June, and initially we received around 88 orders in the first week. But after we held a Spaces session with Shaz discussing his latest book, the orders increased up to 226 units that month; a whopping 150% increase in sales.
Copied and pasted from Eksentrika.

Hafizul pointed out that new writers, especially indie ones, need frequent exposure to carve a name for themselves in the scene.

“The key is to be consistently involved with the writing & reading society.”

Based on JIWA’s market research, their targeted readership comprising youths were already avid Twitter users. This makes Spaces intuitively suited for their marketing messages and campaigns.

Kata-Pilar’s Ainul Mardhiyyah pointed out that it is also convenient for listeners to follow a writer’s Twitter account by tapping on their profile picture without interrupting the discussion sessions.

“The interactions can still go on after a Spaces session has ended by tweeting and tagging people on the feed from the session.

“Google Meet and Zoom focus more on their chat function to discuss in text, and listeners and writers would less likely interact with each other after the session is over,” she said.

Amir added that Twitter was also more accessible to the public compared to platforms such as Discord.

“Before this, we started Discord with our own server and we’d have voice chat sessions with 20 people.

“The problem was that people needed to join the server first to participate in the sessions, so it wasn’t exactly in the public.

“Twitter is very popular; anyone can start a discussion for anyone to join, and you don’t feel like you have to talk as a listener.

6. Stay up to date and support each other.

As a small indie publisher or upcoming writer, kinship support can turn into valuable impetus.
According to Amir, this is gained from joining more literature-related Spaces sessions as listeners.
“Contribute to the discussions in there, whether by asking questions or answering a prompt.
“Slide in a little promotion of your works too. Over time, you’ll attract the attention of both readers, authors, and publishers, as you put yourself out there.”

He added both emerging and veteran writers can stay on the pulse by paying attention to the discussions.
“…Not only the tips & tricks by the authors but also answers and anecdotes by readers to get a sense of what they’d like to read too so you have more insight into the market.
“Perhaps it’ll drive your writing style to suit the taste of the target audience you’re aiming for.
“As for hosting Twitter Spaces sessions for smaller writers, I’d recommend them to call other writers they know to join in and discuss writing or book-related topics. Just talk and chill out, don’t worry about being judged!
“Once you’ve gained a following, you can then start to specifically promote your own works through these sessions,” said Amir.

The use of Twitter Spaces has become a marketing trend, so much so even government literature institutions and Government Linked Companies (GLCs) such as Media Selangor and Perbadanan Kota Buku, have hopped on the bandwagon to discuss developments of the Malay literature industry.
Aspiring writers and authors could especially take advantage of this platform to gain visibility among Malaysia’s literary community, while established writers, may expand their fanbase by gaining new followers among the public.

If you think Malaysians should not just read books but talk about them too, check out some of the fortnightly sessions by FIXI, JIWA, and Kata Pilar.
Copied and pasted from Eksentrika.

We’re looking for writers to write about the arts & culture in Malaysia and beyond. Read our F.A.Q. here before submitting your story pitch.