Graffiti, regardless of its form, makes a statement. And any notion of meaning or interpretation towards the art which has existed since prehistoric times is left to the perception of the viewer. However, people often consider it as vandalism.

It is a time-intensive craft explored by highly skilled artists. And this art form is dominated by men. Contributions by the women have been particularly overlooked in many parts of the world. Despite pursuing their art under dangerous and illegal conditions, they do not receive the same respect as their male counterparts.

In Kuching, women are underrepresented in this subculture. One, however, is pushing the limit and challenging the stereotype. Miyo – real name Dewi Emilia binti Iskandar – is Kuching’s first female graffiti artist. In fact, the only one on the radar. Leaving her marks within the masculine spaces of street art, she astounds the traditional gender notions. 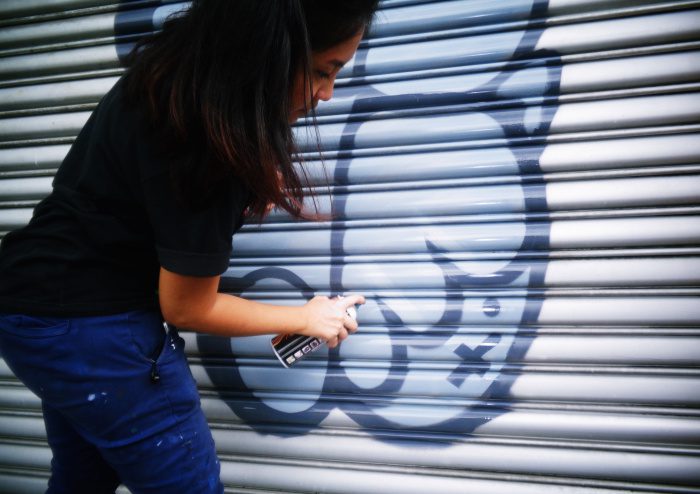 Calling her spray cans “boyfriends”, Dewi is literally a goddess with a spray can! Preferring to use Anchor and Pylox – as they’re a cheaper option – the 32-year-old single mother spends RM 300 on average to purchase her materials.

Much of her writing style is inspired by Hiragana & Katakana, Sarawakian natives elements, and also the Egyptian hieroglyphics.

During my interview with her, she spoke passionately about the art of graffiti and her devotion to it. While some best-known female street artist has gone to great lengths to preserve their anonymity, she who sometimes goes by the moniker ‘Tha Black Cat‘, through this interview is doing the opposite.

Could you describe your journey into becoming the first female graffiti artist in Kuching?

I used to create weird block letters. I was 13 at that time, and I had zero knowledge about graffiti. I was introduced to the art of graffiti in college by my lecturer. I started painting in 2007 on a plywood for a competition. It was a solo project.

I took a break and got back to it again in 2012 when I met my junior Dhiya Roslan who shares the same interest. I was not a skilled graffiti artist back then so, I picked up a thing or two from him.

We then officially kick-started our journey at an event called ‘Youthnity for Charity’ with some friends under the name RUSK Crew. There were Saddiq (Twenty-Fifth), Razi and Moody. After a while, we got along well and got Shafiq Fauzi (Shaff) on board as well to ‘bomb’ Kuching city. 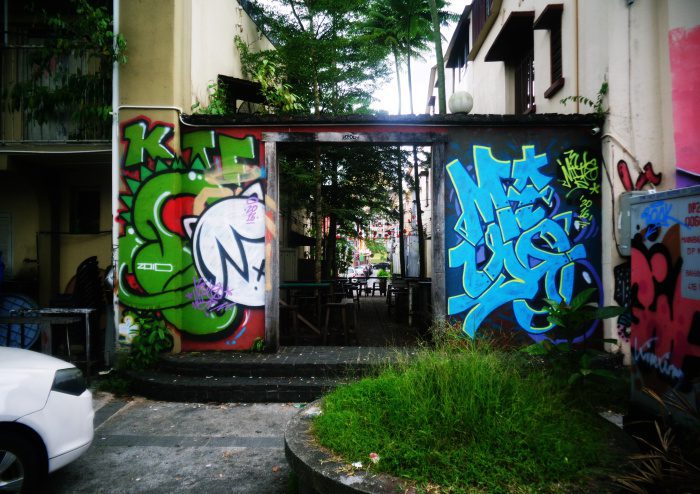 In 2013, they left to further their studies in KL. And I was left alone here. Fortunately, I had an offer to work at a bank so I had to go for training in KL for a week before sitting for the exam. When I was there, I saw a post on Jin Hackman’s Facebook page about a graffiti jam in KL. I contacted the curator of the event, Mile 09, and joined a whole bunch of strangers to ‘bomb’ the walls in Jelatek. I was the only female writer there and the rest were pretty surprised. It is almost impossible to find a female graffiti writer in Malaysia.

After some unfortunate events in life, I stayed away from the scene for a bit. And got back to graffiti in March 2014. During that time, I received a couple of offers to paint on walls. I saw a great spot at the Bishopsgate’s arch in Carpenter Street and started to paint on the ‘virgin’ wall. A few friends tagged along and soon, Kuching city was filled with more and more graffiti.

Later, I began receiving some serious warnings from the Kuching North City Council (DBKU). I would fly to Singapore, KL and Miri whenever I get caught. But it was a great turning point when DBKU called me while I was in Singapore telling me that they want me to paint for the city. I took the offer and worked with an art community group that was recently established by D2K and I called the 9Lives. Ever since then, the public slowly accepts street art in Kuching and now more painters are coming out to ‘bomb’ the walls.

I travel quite frequently since 2014 to Singapore, Indonesia and KL to leave my mark. I also took part in most of the graffiti events in Indonesia. Through that, I got to meet more great, incredible talents around the world. 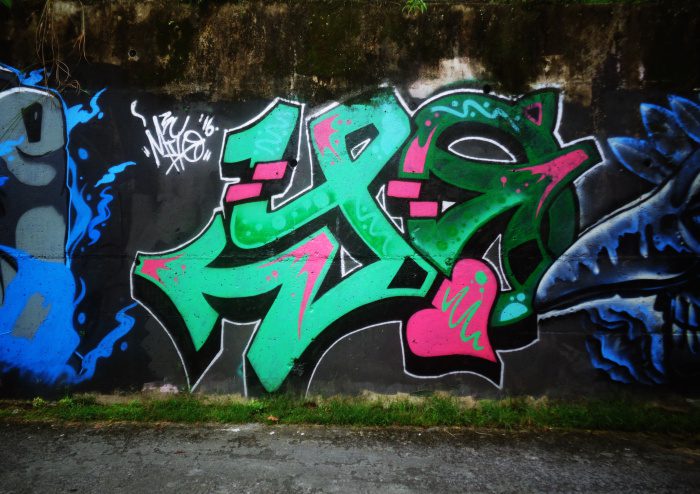 2015 was also a great year as me and the 9Lives art group was approached by Petronas to paint under a program called ‘TanahAirku’ which made a big hit for Kuching painters.

In 2016, I won fourth place for a graffiti competition in Brunei against all guys and a girl, created the first ever official graffiti workshop in Kuching with my old friends and got a spot under TEDx, exhibited some of my artworks and had a mini graffiti workshop session.

I have mostly been doing commission jobs to paint on walls and participated in quite a number of exhibitions under 9Lives. Now I focus on my work as an independent artist. 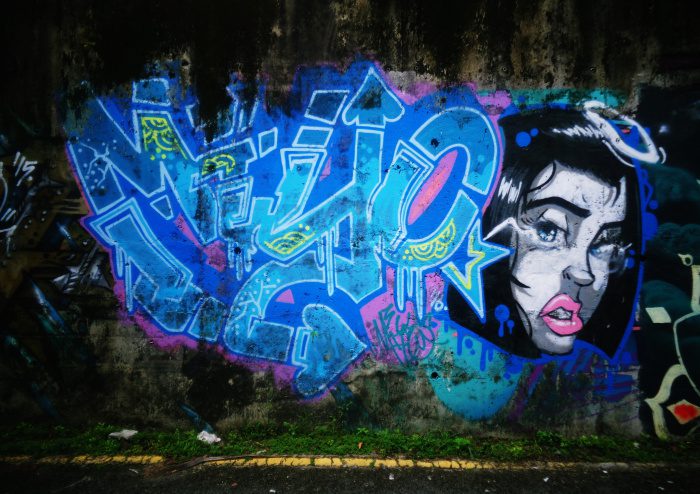 It has been a tough journey with a roller-coaster ride from the streets to fitting in with an art group but nonetheless an amazing one; especially the ones that I have experienced in Indonesia and Brunei. I learned a lot through some graffiti friends in Indonesia, had my first ‘spraycation’ (spray-vacation) in Java from Jakarta to Tangerang to Yogyakarta to Bandung and back to Jakarta before flying back home, all by myself.

Indonesia is like my second home and I went there just to travel and paint on my own, met strangers then became good friends with some Indonesian’s finest like Poetry, Zaner, Cloze, Mone, Yogyakarta boys, Bandung writers and more. They certainly opened up my eyes to the real graffiti life and how it works.

Currently, I am given the opportunity to use a studio space at ChinaHouse, Kuching on my own until further notice; as a creative space. 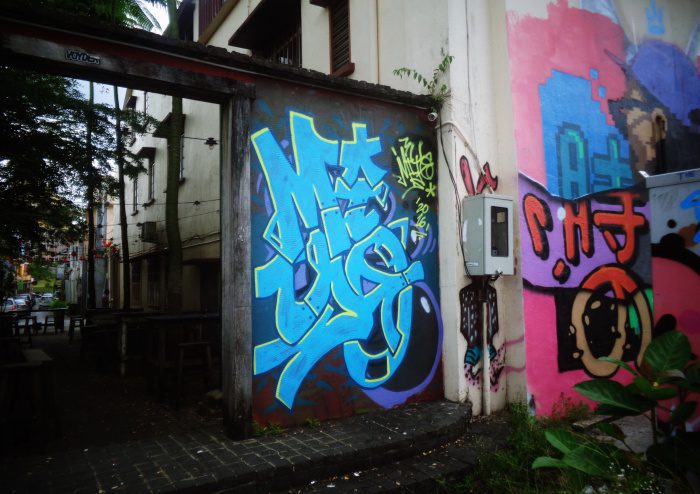 This is a very inspiring story! As a female pioneer of street art in Kuching, who or what inspired you?

There are a few people. My mum is my great source of inspiration; I saw her doing batik ‘canting’ since I was small. My daughter as my motivation to be the mum she would be proud of. My late boyfriend Yuki who has mad love for creative street stuff and also this great graffiti writer named MAD C from Germany who is just great at what she is doing. Masia One (SG Reggae Ambassador) is another inspiration of mine.

Have you come across any other aspiring female graffiti artists in/from Kuching?

Not even a single soul, but that is yet to change. I just need to work harder to create interest in them, I guess. Some approached me for a bit of guidance but then disappeared in a flash. Graffiti is always known as a ‘male’ thing and that explains how it is almost impossible to get females to have passion in graffiti. 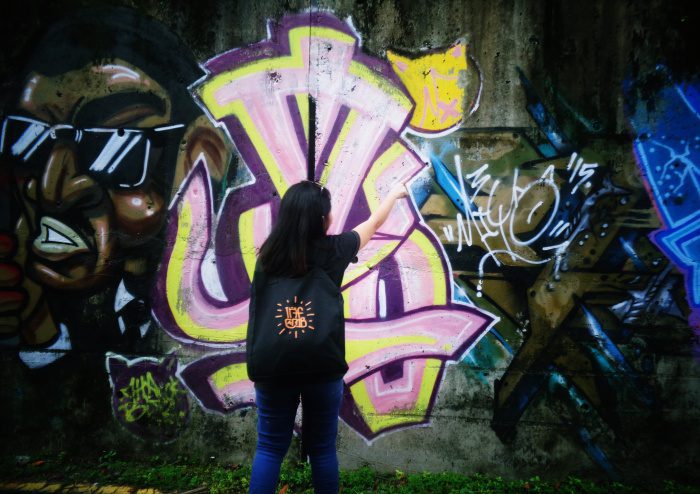 Right. So, in your opinion, how is street art different than more formal kinds of contemporary art? Is it more or less important? Why?

Graffiti is the only art that cannot be bought or sold. Unless if it is a commission job, then, of course, graffiti writers are getting paid but loses the real essence of graffiti as an expression that is priceless. Real graffiti artists do not expose themselves in the public eyes. They are mostly anonymous, always working discreetly with artwork that shouts their name and character.

Graffiti or street art is as important as contemporary art where messages are conveyed through arts whether it is based solely on imagination or sensitive topics like politics or religion to create awareness. Most people perceive graffiti as vandalising properties because it made the streets look dirty but graffiti writers think the opposite.

How do your family and friends feel about your artwork?

Initially, my mum was not too keen on me leaving a fixed day job to be a full-time artist but somehow, I managed to open up her eyes when I got paid a lot for my projects. Her main concern is my daughter’s future because I am a single mother also. But with time, she began to understand that money is not everything and for as long as I keep on doing what I love wholeheartedly, I will always get her support. The rest of my family was also very sceptical about it in the beginning but like my mum, they are slowly adjusting to the fact that I am rebellious and a born artist at heart. Nonetheless, I get supports from friends and families even though not everything I created impresses them.

How do you go about getting walls for yourself and other street artists?

I take walks around town or cruise at times and with my ‘cat’s eyes,’ I would spot a wall that screams ‘paint me’ or abandoned buildings, walls under the bridge that catches my eyes. When the time is right, I will ‘bomb’ the spot either by myself or with some friends. 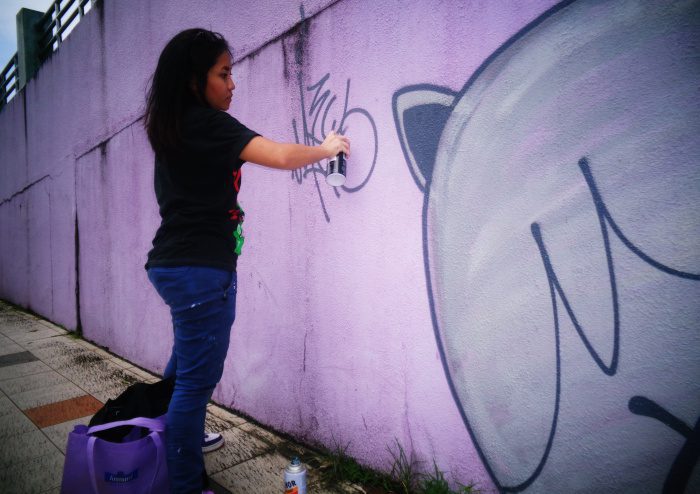 What is challenging or difficult about street art in Kuching?

It used to be thrilling which makes it exciting because we need to avoid from getting caught by the city council. Now it does not feel as adventurous as before. The city council has now accepted street art and allowed it to be filled in Kuching city.

I can tell you miss the thrill! And what do you find surprising about doing street art in Kuching?

The public and the government bodies seem to have adapted to having graffiti all around town. And most painted walls have become an attraction where locals and tourists would take photos for different occasions, from weddings to projects, to just a mere selfie shot. 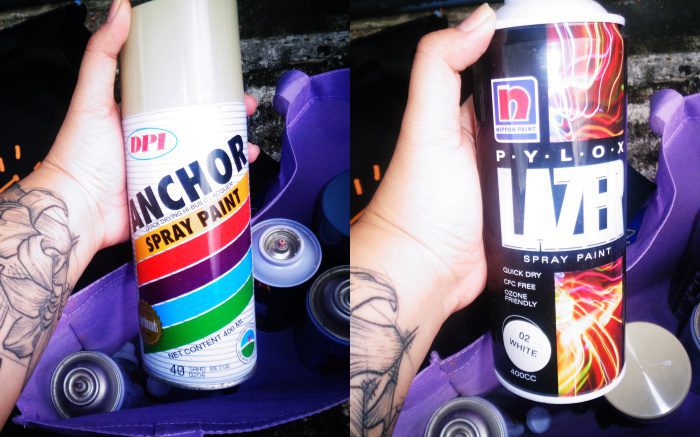 What kinds of reactions do you get as a female practising street art in Kuching? Are you threatened or do you feel frightened? And are you lauded?

As a female graffiti writer, I get criticised a lot. Some from the professional graffiti writers, some from peers who thinks that my art is ‘ugly’. At times it gets to me, but far from threatened. I felt challenged which makes me want to be better and surprise myself by proving them wrong.

Is there a strong interest in visual arts, or its history, in Kuching?

I believe so. As you can see the rapid growth in the Kuching art scene. The only thing that we need now is a ‘Balai Seni’ to display the work of our local artists (young and old). Since most visual arts nowadays got exposed through the ‘back door’ (shortcut) unlike the fine artist that has got to go through a lot of tedious and difficult process, the interest somehow shifts at times to modern contemporary art even though fine art is still considered as more valuable. We have art collectors and art lovers coming from all around the world or the locals who would support the local art scene by purchasing our artworks or give us commission jobs.

Enjoyed this piece? You will love this if you’re from Borneo!

A Sarawakian artist is behind these dreamy mermaid artworks

To get in touch with Dewi, follow her on Instagram. To read more of this interview, head over here. Are you an artist based in Sarawak who would love to be featured? Drop us an email at [email protected]