‘Penglipur lara (Storyteller)’ – Life is filled with stories and narratives that bring meaning and guidance. Let’s remember that life is not just for pleasure, but also for us to learn to be better people, to be stewards of the earth and to always glorify Allah the Almighty.

This is the largest artwork I have produced since, 8 x 5 ft. I painted this over four days in the pedestrian tunnel of the Masjid Jamek LRT station.

My four days painting at the station were filled with memories and stories. On the first day, I met Allie Hill at the station entrance and we headed straight for the tunnel. We also met Kenny Loh, a photographer and Allie’s cousin, who was keen to document the process.

Every now and then, the voices of commuters, who had just come off the LRT, broke the silence in the 200 feet long tunnel. And so with an utterance of Bismillah, I began to sketch on my 8×5 feet panel.

The mural concept portrays the life of a ‘penglipur lara’ or wandering storyteller, a life rich with stories and fantasies. Based on this concept, I made my painting using a doodle technique of undulating organic lines and patterns found in Malay art.

A number of commuters stopped by to ask about my mural. Many expressed their surprise and joy to encounter a ‘live’ drawing session on their regular commute. I began to relax and get used to drawing in a public place. Even with Kenny clicking away in the background, I could focus and did not feel self-conscious.

At one point, a grandpa in his 70s appeared and stood behind me.

“I’m so pleased with young people like you, so creative” he said while patting me on the back. And then his imagination took him away… “… see this hand here.. you could turn it into a dragon, couldn’t you… and over here, by the water.. why don’t you make a crocodile appear…”

He stayed for quite a long time and told me so many things that I can’t even recall all of them now. Slowly and steadily, I drew my fine lines as I listened to him natter away.

Not long after that, a kakak came over and asked which school I attended. Again we had a rather long chat, but I must admit I have forgotten most of it. All I remember is that she showed me a photo of some wild boar piglets that had slept near her home. 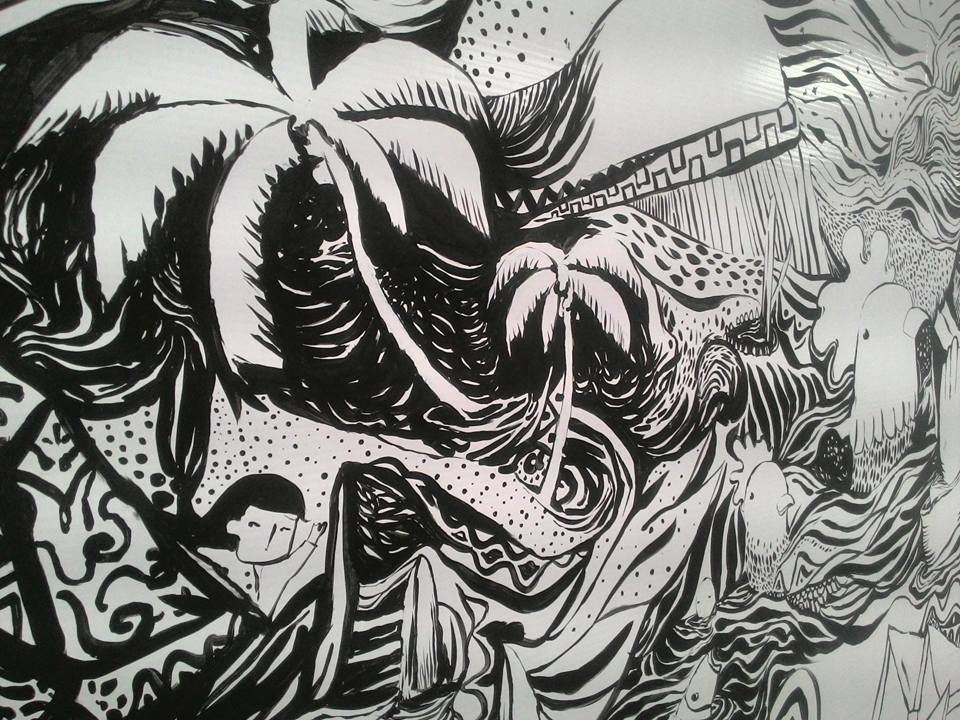 Everyday, I drew from morning till about 4 or 5pm, stopping only for food and prayers. Outside the station, it was chaotic, hot and dusty from the renovation works at Masjid Jamek.

Sometimes I stole a glance at the many homeless folks who sought refuge in this area and thought to myself, their outlook may seem quite grim now, but maybe in the afterlife it will be filled with light.

I offered some alms based on my means. The few days that I spent here has been a humbling experience. Even though I am not rich, the gulf that separates us is still so vast. A life full of laughter can make us forgetful and careless. Sometimes our hearts need to weep so that we can understand the true meaning of life. I managed to buy a jar of perfume from a Syrian refugee at the side of the mosque before returning to my work. I was reminded of a saying by Andrea Hirata: “Live to give as much as you can, not to take as much as you can”. 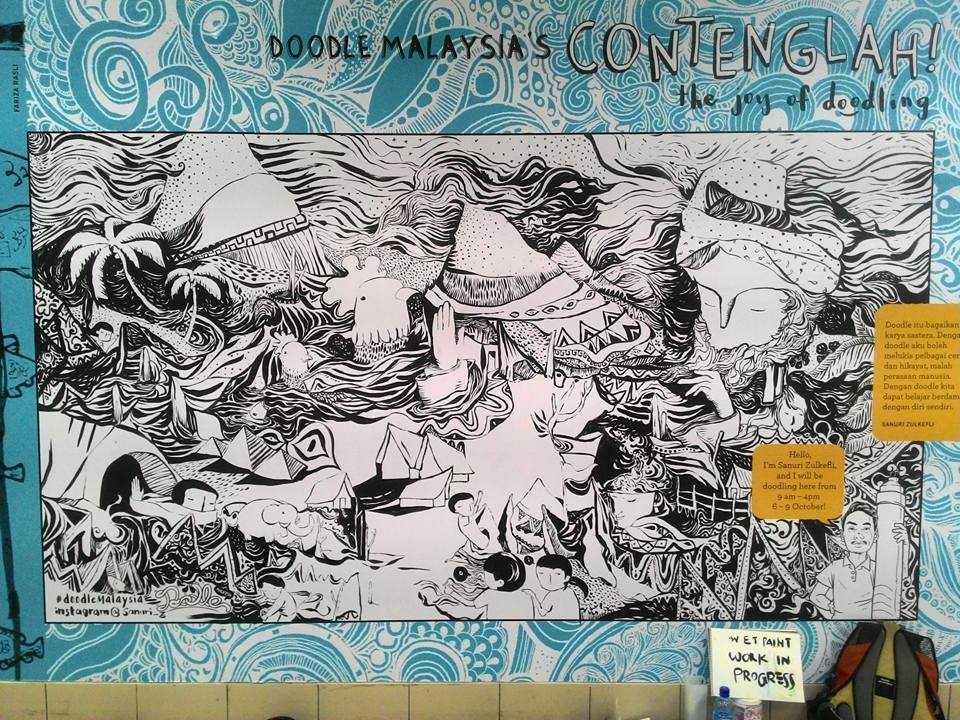 A group of ladies also came to ask about my mural, but in the end I realised that they were trying to convince me about the benefits of network distribution. Those are things that I really could not be bothered with, so I tried to send them away as gently as I could, and eventually, they went on their way.

I will never forget all the friends from Doodle Malaysia who came to visit while I painted. When they came in a group, it was as if the quiet tunnel had transformed into a pasar malam – what a cacophony of chatter and laughter! And finally, I was also grateful for the chance meetings – old friends I had not seen for years happened to pass by, and we managed to catch up on each others’ lives.

Feature image by Organiser of Contenglah, Allie Hill and video by Daliso Ngoma. Writings by Sanuri Zulkefli, translated from Malay by Allie Hill. Sanuri was among several artists involved in a live doodling experience at Masjid Jamek LRT station, for Contenglah, by Doodle Malaysia in conjunction with this month’s INKtober. Check out more of Sanuri’s work on his blog and Facebook page.  Are you an artist with a story to share? Say hello at [email protected]