When stories of refugees are shared through food and the arts

I tried bakhlava for the first time. I have heard about it in movies and youtube videos so when it was actually placed in my hand for the first time for me to munch on, the curious mental and physical distance between I and this ‘oh so mysterious Arabian food I keep hearing about but have never googled’ vanished.

Almost like it was one of the few things I did not have to actively seek out for in my jungle of space and time (fancy words to describe life). Given to me just like that, which was nice.

For those who don’t know still, what a bakhlava is, it’s a cookie with many layers of nuts and sugar. I had it as a sample from one of the Syrian vendors at the FAME Festival in Publika Shopping Gallery held from March 4 – 5. 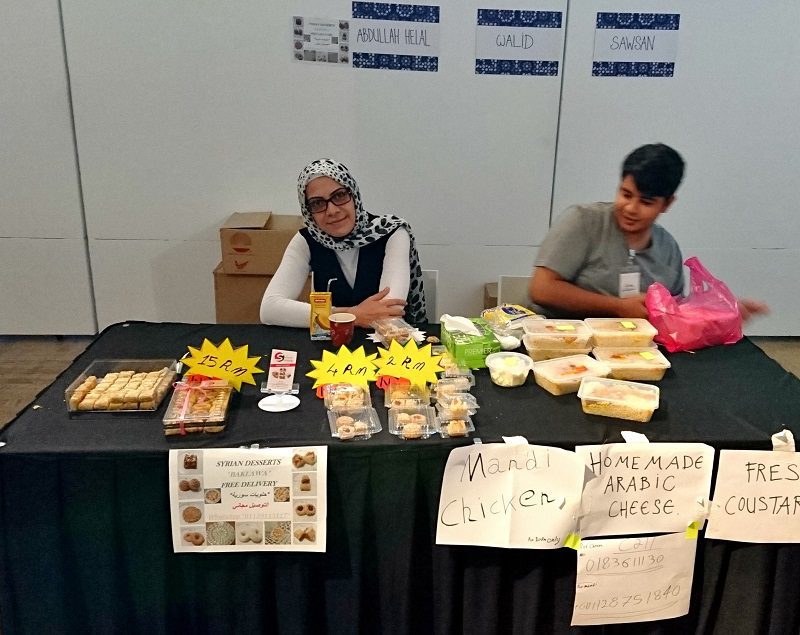 I would have never imagined that I would be able to sample food at war-stricken middle eastern countries in a posh shopping mall in KL.

Always on a diet, I strayed away from buying cookies I would cheat on or a big Tupperware of authentic chicken Mandi that would keep me full til the next day, I savoured in an RM4 spinach puff and mint tea, made with love by a Palestinian father.

And they were all at decent prices. I can say this from the perspective of a student. They were all pretty cheap.

Speaking to the founders of WaveMakers, Rachel Lai, Sasha Yusof and Nadzridah Hashim (who was happily tucking into a dish of chicken Mandi) at the time, they described the FAME Festival, not as any other charity bazaar but an empowerment program to better the livelihoods of the middle eastern refugees.

Nadzirah passionately explained, “We came together and taught up this project with the United Nations High Commissioner for Refugees (UNHCR) as they were looking for companies that were based locally to pitch a concept that could increase the entrepreneurship of the Arab refugees based in KL and also to build their sense of community. The UNHCR hired service providers like us to execute programs like this and the Refugee Artisan Heritage Program.”

“It is to empower them to connect with the Malaysian businesses and market in general. These refugees, they cannot find jobs here but they have skills and a very strong cultural heritage that they express via sewing, cooking and baking but don’t have any local connections to be able to practise. So we created this whole project to help them be able to hone and promote their work.” Sasha chimed in.

When asked about their highlights of the event, Rachel went ‘Woah, there’s been too many. Perhaps the biggest highlight was having this whole thing come together, on top of getting to know the refugees, their stories and meeting their kids.”

“People usually run a bazaar and that’s it, we did three different things – a bazaar, cooking workshops and the theatre show at night. We were also very lucky to have learned about their cultures, Arabian culture is very different than Malaysian culture even if we share a lot of Islamic influences.”

Ooh did I mention they held two workshops teaching you how to cook yummy Middle-Eastern food?

I was mostly looking forward to the theatre show at night, directed by ARARA’s Razif Hisham.

We were told that it was a play acted out by a team of refugees, three mothers and their children as well as two young lads from Syria.

The idea of hearing personal narratives and seeing the horrors of war being acted out by people who had first hand experience was thrilling but also sent a sense of nervousness down my very relaxed and comfortable Malaysian spine.

We’ve not had war or famine or bombs in our backyard.

Now we are going to hear and see depictions of what it was really like rather than off of a TV or computer screen.

Entering the blackbox theatre, the audience were made to walk in lines dividing us by colours. Perhaps this was done to help us feel what it was like to have our mobility suspended and rushed as refugees. 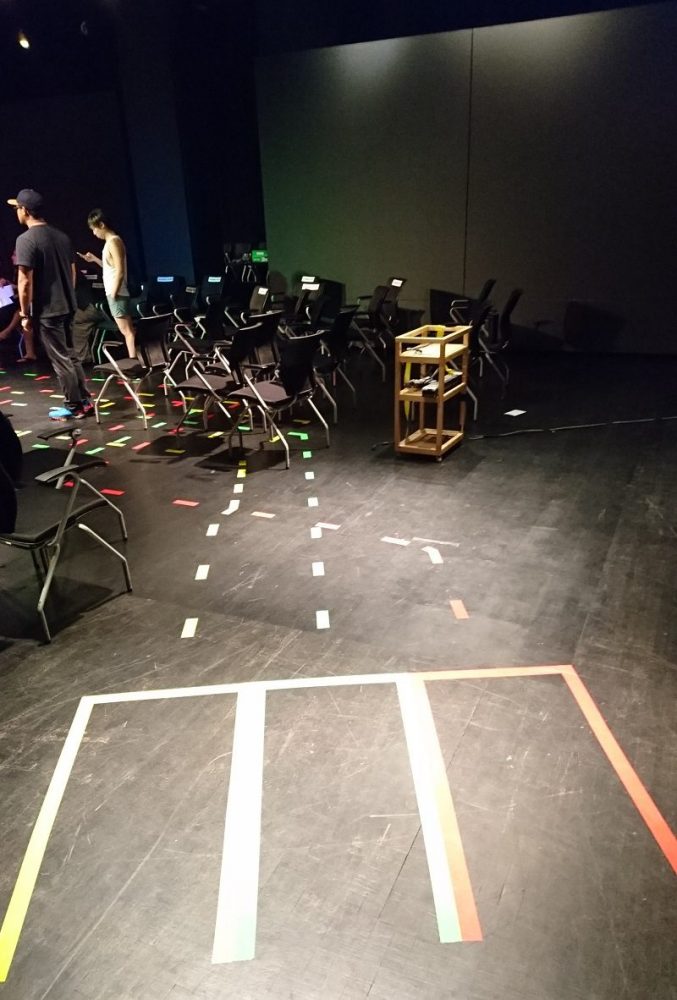 The play started out with Omar Al-Khammash serenading the audience in one of the several Middle Eastern languages incorporated into the play that evening, while strumming on a Turkish lute.

The rest of the production was melancholic, almost nostalgic as they described what it was like to leave their families back home on such short notice and travel to Malaysia.
While I noticed one other lady bawling her eyes out across the room, I sat in my chair, with an ‘ILLEGAL TO SIT’ sticker plastered on it, making my bum a source of instant misdemeanour, simply looking on to the actors illustrate their journey.

Desperation filled the air as the mothers re-enacted what it was like to ask their children to pick one item of utmost importance to bring along.

A short-lived happiness of the refugees making it to big, shiny Kuala Lumpur was portrayed, before they had to face the burdens of work, travel and education that has not yet stopped being a problem.

When Hasan Al-Akraa described what it was like to be slapped as a child by an Immigrant Official, it was like a shared slap in the face for us who are unaware of the daily abuse faced by refugees.

The message at the end of the act was clear, they were human.

“Whether we are refugees or Malaysian citizens or whatever it is that we are, we are all people and we all have the same needs. If we go beyond food and water, all every human being wants is to be safe. That’s the first and after you are safe, you need to work and you need to educate yourself. All those refugees in there, they crave education” Razif explained to me, after the play.

I brought up the possible challenges Razif had faced while bringing together the play and he interjected;

“It was a huge process to get them to do acting exercises to get them to get out of their shell and be more creative. If I had put words in their mouth then it was going to come out fake. It is like giving them a script, but I didn’t want to do that because I wanted to follow the art of Arabian story telling, whereby the story is told from the heart. Excavating these stories were extremely difficult and I would say that that’s the feat that we conquered.” 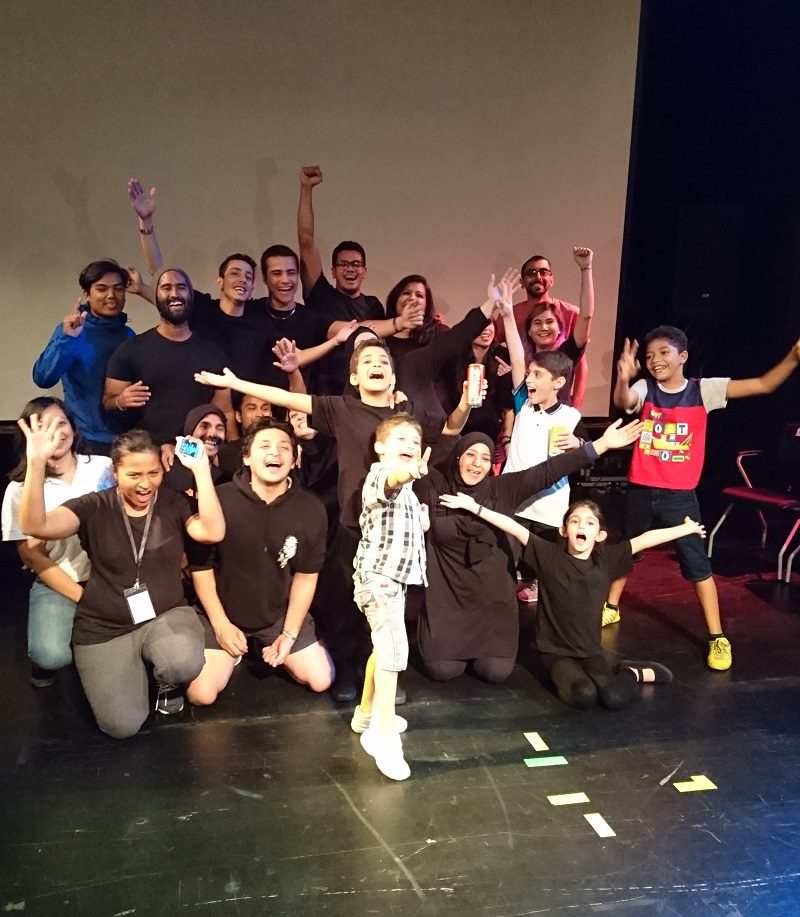 He had settled my doubts of whether the narratives of the actors were scripted. It only wrenched my heart much more knowing that the stories spoke out within the surrealism of the blackbox theatre was real.

Ultimately, the FAME Festival was the product of hopeful Middle Eastern refugees and local organisations that are dedicated to their cause and humanity.

I definitely recommend everyone keep a look out for more collaboration involving the ardent trio from WaveMakers and UNHCR as well future productions by ARARA.

What are your thoughts about initiative such as these by the organisers of FAME Festival? Comment below or share with us at [email protected]