‘Rags to Riches’ – a photo collage of Malaysian stories

At RUANG by Think City with big bright windows that display the uniformed buildings of all shapes and sizes surrounding it, withering with age, is a photography exhibition on the people that kept it alive and those who are still breathing life into it.

Rags to Riches: A Story of Kuala Lumpur, the brainchild of photographer Kenny Loh in collaboration with King Chai and former editor-in-chief of The Malaysian Insider Jahabar Sadiq, showcases human portraits of the people that preserve pre-millennial Malaysia and those who now reside here in conditions that may not be laced with such dreamy nostalgia. 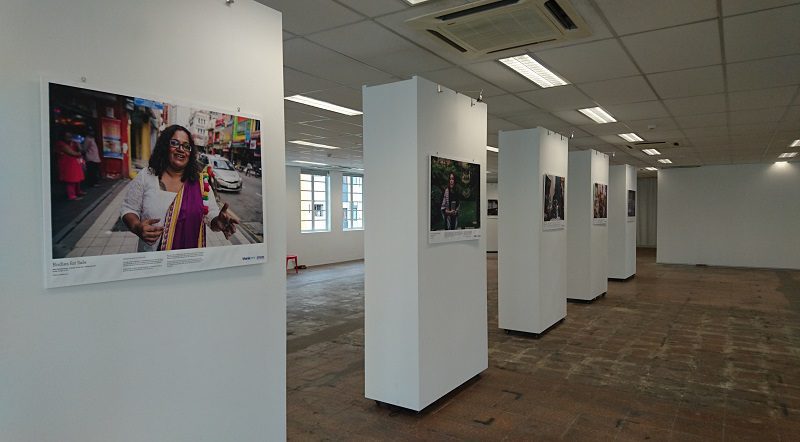 Among the smiling faces of Malaysians shown, the migrants that walk the streets of Malaysia, often ignored, are also showcased in this photography exhibition.

Kenny Loh says his book ‘Born in Malaysia’, a compilation of Malaysian human portraits that were mostly on display at the Rags to Riches exhibition, started off when he returned in 2009 from living abroad for many years and was at a loss, unsure of what remained of his home land.

“I had memories of my dad driving us around from Ipoh to Kuala Lumpur to Singapore and along the way we would stop at all these small towns like Tapah and Kampar. Those memories are very vivid still. ‘Born In Malaysia’ was a trip to capture what I remember as a schoolboy. Now ‘Born In Malaysia’ has expanded to include those who call Malaysia ‘home’”.

The stories of today’s migrants in the exhibit often produce waves of sadness as you read them, with recurrent themes of human trafficking, employer abuse, poor living conditions, sexual assault and familial separation. 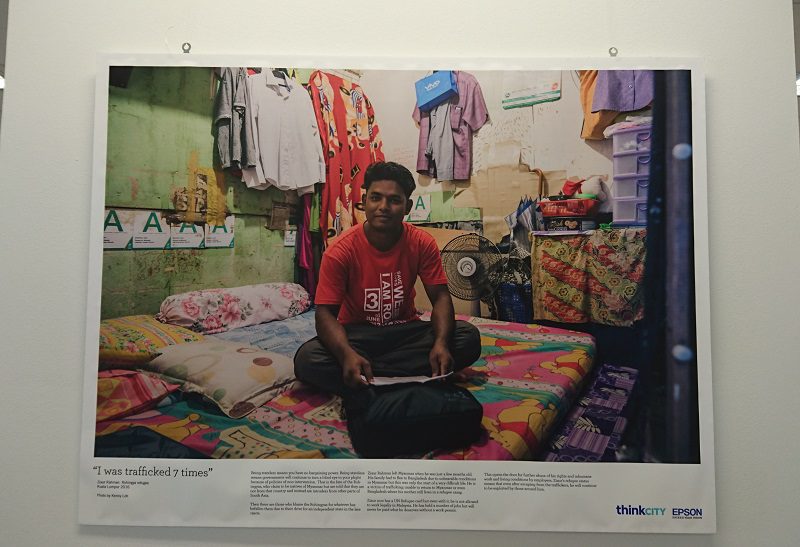 When asked why he chose to pursue the plights of Bangladeshi and Nepalese migrant workers, Kenny says, “my great grandfather once landed in Medan Pasar, as have many immigrants since then.

“So this project is a very natural thing for me. Walking around KL in certain shopping malls, you see them doing the work that Malaysians don’t want to do. Being a photographer, I’m always very inquisitive about the stories of the workers we often take for granted.”

Kenny’s explanation resonates with one of his favourite images, which is that of a trafficked 16-year-old Bangladeshi boy, who felt like he was invisible to Malaysians who never saw him cleaning up for us. 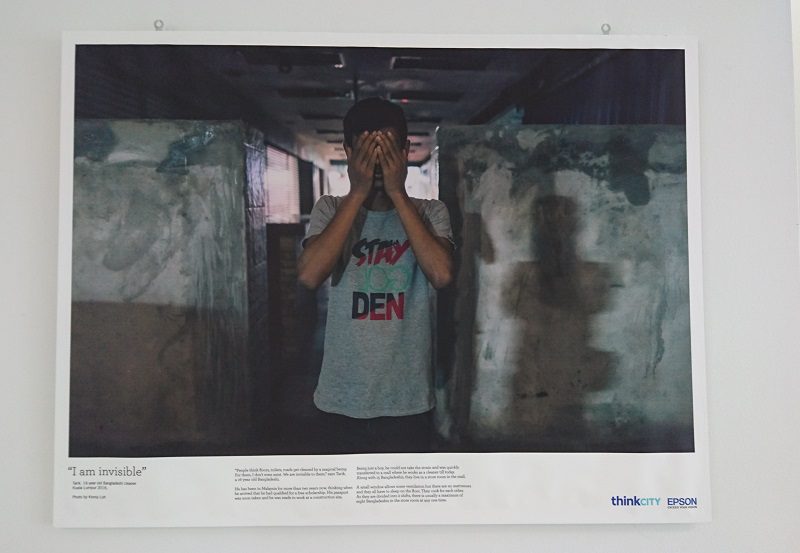 On the theme he chose for his exhibition, Kenny is amused to discover that many visitors seem to think the focus is on migrants.

“It’s not,” he explains, adding that the photographs of migrants only make up half of the exhibition. “For most people, the refugees and the migrants really stand out and I think that’s a good thing. Because it means that there is an interest in what they do,” Kenny says.

I am ashamed to say that it took a visit to an exhibition on human portraits and stories to make me realise that I had embedded negative perceptions towards migrants.

And that for no genuine reason, I avoided them.

To me and many of us, migrants are them and we are we.

We never know their stories. But Kenny sought to capture the narratives of those whom we never bother to converse with.

Often, their stories are not pretty.

To save our faces, we have some Golden Malaysians who, unlike the majority of us, actually give a shit.

“You made it a point to showcase the Malaysian volunteers who help the homeless and underprivileged migrant workers,” I told him.

“Oh that’s huge. People give so much of themselves; some doctors come once a week to give medical attention to those in need. Even the street feeders going around, the lady who cuts the hair of the homeless for free… I think there is a lot of good in the society that the media chooses not to focus on.”

As I was pondering if any migrants had come to the exhibition, Kenny interjects, “Yes.”

He adds; “Every single refugee that is featured had come. We have had a few migrants we invited from the streets across who initially felt unwelcomed. I photographed them here and I’m going to print it out for them!”

Across the exhibition were three prominent pictures taken by Jahabar. 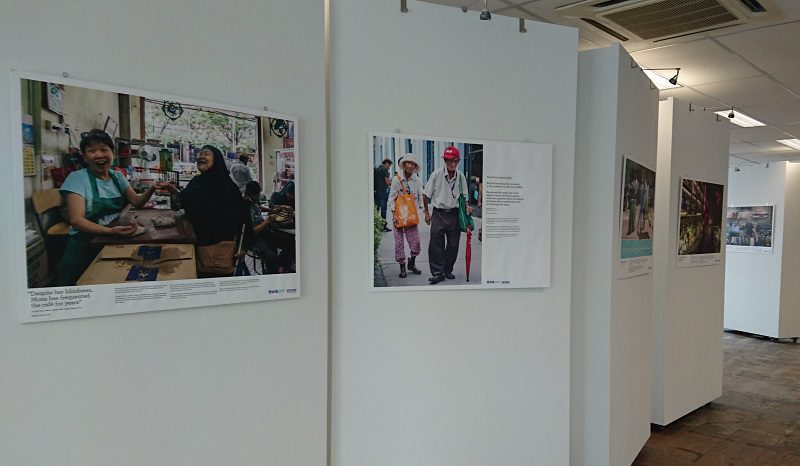 Jahabar says the Rags to Riches project is close to his heart as his forefathers were also migrants.

His favourite piece from the gallery is ‘The cane shop that closed down’.

“It is a sad piece. It represents a passing of an era where we valued artisan-ship, and things made by hand by fellow migrants who brought the art and skills from their home country. Now we have no use for it, it has all become industrialised.”

The ‘cane shop that closed down’ is a picture by Kenny, depicting one of the many dwindling local Malaysian businesses, that are usually the pride of families, rooted to their traditional culture, who try to maintain their businesses throughout each generation.

The same opportunities that are robbed from migrant workers once they leave their homelands to pursue better salaries here.

The similar form of dedication that the migrants brings with them are barred from being displayed as they are often not granted the right pieces of paper.

Trying to pick at the taboo-ness of it all and testing how thin liberalism can be spread, I asked Jahabar what he thought of the racial slur ‘pendatang’.

I am very proud being called a ‘pendatang’. My grandparents came here from the most brutal parts of India and China but they have prospered. I wear it with pride. It’s only a slur when you feel insulted or demeaned by it. This exhibition is about how we were once pendatangs, our grandparents were pendatangs and how we are now Malaysians as well as how we treat those who come here now.”

As I was interviewing Jahabar, I found it difficult to keep eye contact with him, as right behind him was a section of King Chai’s project.

It was a picture of a fabulous party that would have been pretty cool to have been invited to.

In a social media interview with King Chai, I asked him why he decided to pursue and focus on the Filipino community – straying somewhat from his peers who mostly captured South Asian migrants.

King Chai answered, “What surprised me most about the Filipino/migrant community here in KL is that there are always “centres of activity” for each respective community. “

“For example, majority of the pictures that I took are at Kota Raya, which is often known as Little Manila for the simple fact that it has somehow become the “home away from home” for the Filipino community here in KL.”

“How it became that way is beyond me but what I do know is that every single person I have profiled in my series of photos of the Filipino community would have come through Kota Raya at one point or the other.

“I’m most interested in how all of that started and how they have come to build an entire ecosystem for themselves to take care of their own needs.”

When I asked what the fab-looking Christmas party was like, King Chai mentioned, “It was quite an amazing sight. Everyone was really there to celebrate Christmas in each other’s company, it being one of the most important religious celebrations for the Filipinos and they were all away from their families.”

“There’s a feeling of happiness in the air because everyone is drinking and making new friends (most of them didn’t even know each other before that day). At the same time, you could see mothers FaceTime-ing with their families back home.”

Once I had seen, read and soaked in each picture at the exhibit, it was time for me to witness another collaboration situated at the back of that gallery for that day only.

Ruby Subramaniam’s ‘This Body is Mine’ project, fitted its way in Kenny Loh’s ‘Rag to Riches’ on the back of Sharifah Nabila, a young dancer of Chinese and Arabian descent.

Ruby explained that her collaboration with Rags to Riches is paved by how the exhibition discusses how people from different backgrounds, migrant workers from different countries come and make Malaysia their home.

“My volunteer Nabila, is a product of Arabian and Chinese migrants and I thought it would be really interesting to include her story and how she is trying to find her identity in this day and age with her heritage and background.

There are three elements to this, my painting on her, her experience and skills as a dancer, the way the migrants would react when she dances around them and the photographer (Kenny Loh) who binds it all together.”

If you would like to drop by Rags To Riches, you could still do so until Saturday (25th February) from 10am to 6pm at RUANG by Think City. Kenny Loh’s book ‘Born in Malaysia’ is being sold at the exhibition and he would be more than happy to sign it for you!

The Bahasa Malaysia version of the book will be released in a couple of months while Rags to Riches will be released this November. Do visit born-in-malaysia.com to see a wonderful collection of Kenny’s projects and many more.

Are you a photographer who is set to hold an exhibition? Email us at [email protected]sentrika.com