Unless you’ve been hiding with frogs under a coconut shell you’ve probably heard and seen Piko-Taro’s viral hit Pen-Pineapple-Apple-Pen (PPAP). Equally infectious and befuddling, let’s take a look at what lies behind its success.

It’s short. PPAP doesn’t mess around or waste time. Like a mosquito it gets straight to the point, infects you and then leaves, stealing a part of your brain as it goes.

The tune. Melodically the song could hardly be simpler. The introduction consists of a short descending arpeggio, otherwise the rest of the song is based around just one chord (C#) played on a synthesiser at a toe-tapping 136 beats per minute.

If the tune is simple, the lyrics are even more simple, with only six words in total (or seven if you count ‘uh’) making the song easy to learn and sing by almost anyone, regardless of age or English language ability. But it is what is not said, but implied that gives the lyrics their power, and yes, we’ll get into that in a moment. 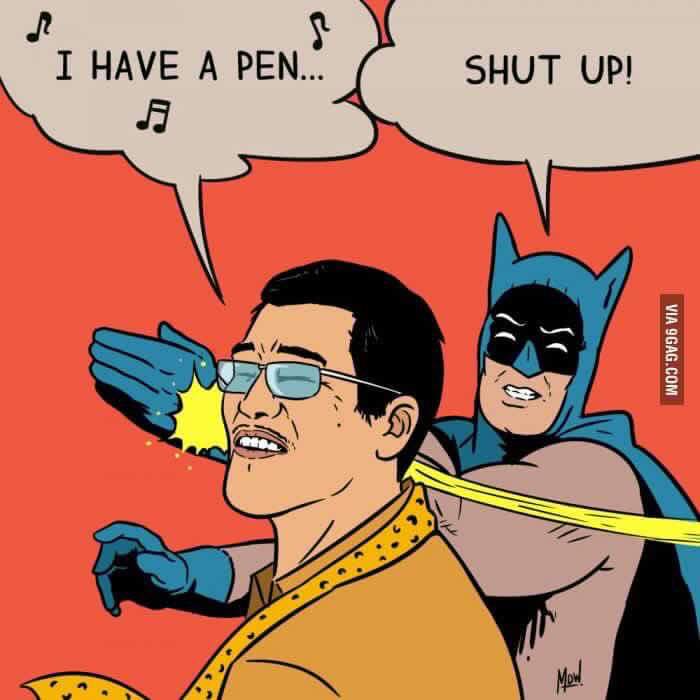 The dance. Piko-Taro’s moves are simple, and easily learned. One of the key components is the forcible joining of fruit and pen. While Piko-Taro’s dance is self-consciously comic his sense of rhythm is undeniable.

The singer. Piko-Taro is a fictional character created by Japanese comedian Kazuhiko Kosaka. His flamboyant dress sense and pencil moustache set him apart from conservative mainstream Japanese social norms, and while humorous there is undoubtedly something unsettling in his demeanour. A younger man might convey quite a different impression, but the character’s age, combined with his outfit, sets him firmly in the realm of creepy uncles, an image he plays up and underlines with his suggestive seductive glances over the top of his glasses. If you met him in a bar or club and he offered you a drink you would probably refuse, suspecting he might spike it Bill Cosby style. In all likelihood you probably wouldn’t really feel particularly comfortable leaving him to baby-sit your kids. In short, shifty Piko-Taro doesn’t exactly inspire confidence.

PPAP – the whole is greater than the sum of the parts.
Taken individually, none of these factors explains the success of the song, nor really reveals any sense of what it might mean. It’s clear that something is going on with the combination of these elements, but to explore what that something might be we need to peel back the lid. Let’s rewind the clock for a moment.

Almost a hundred years ago the surrealist movement came into being. The surrealists were artists – painters, writers, poets, sculptor, and musicians – all intent on questioning the legitimacy of reason and logic as means to explore and explain reality. They were hugely inspired by Sigmund Freud’s teachings and used different methods, including hypnosis, sleep deprivation, and dream interpretation, to reach altered states of consciousness in order to excavate raw material for their art from the depths of the subconscious mind. 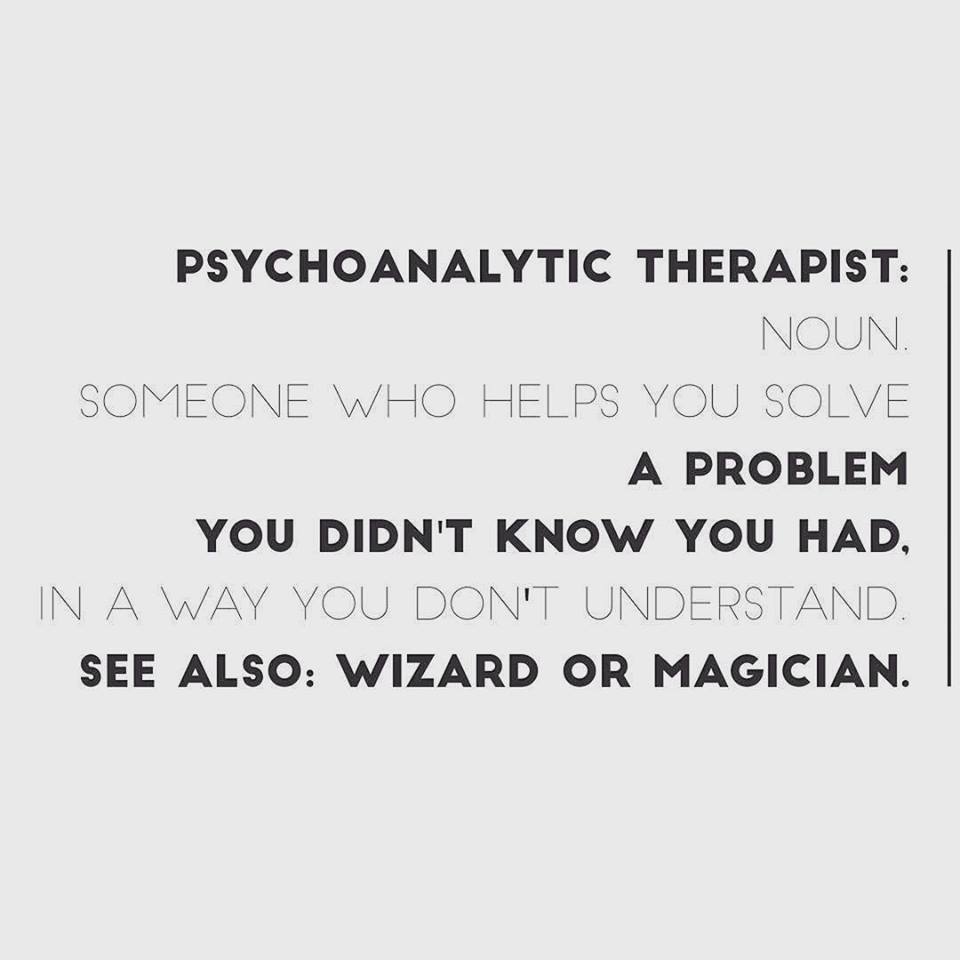 Artistic techniques particularly favoured by the surrealists were the use of symbols and the juxtaposition of seemingly unrelated objects, but also an element of humour. All humour, or let’s say all humour that works, shines a new light on things. It offers a fresh perspective that frames things in a way we might not have seen them before.

The more banal the items combined the more likely they are to tap into a whole set of sub-conscious associations. While the results of these combinations might appear ambiguous or illogical the goal of the surrealists was to allow their art to by-pass rational analysis and have the artworks resonate on a deeper level with the subconscious mind of the viewer or reader.

People take these things for granted nowadays. Symbols and juxtapositions are present everywhere in any and every medium, but in European art at the time the idea of presenting things weren’t a direct representation of recognizable objects was considered revolutionary. The surrealists refused to explain what their artwork meant, insisting that the visceral sub-conscious reaction to the art was much more important than any intellectual dissection. Meaning was at odds with creativity, they argued. The point was for the viewer faced with the piece of art to come to their own conclusions. By creating images open to interpretation the spectator becomes a co-creator, since each individual’s experience of any piece of art is necessarily subjective.

Salvador Dali, perhaps surrealism’s most stylistically recognizable and best known artist, used lucid dreaming and stood on his head for extended periods to help conjure up some of his iconic images. Eighty years ago he created a piece of work that Piko-Taro could easily narrate as:

PPAP, with its layers of embedded symbolism, would have been instantly recognizable to the surrealists. The contemporary ‘WTF?’ reaction was exactly the effect the surrealists were after – the rational mind shut down and thrown into confusion by the sheer absurdity, opening a window and a direct connection to the sub-conscious.

If we look at the symbols used in PPAP we see a classical surrealist combination of seemingly disconnected objects. An apple and a pen are conjoined, but Piko Taro confounds us by side-stepping the obvious conclusion that he now has a ‘pen-apple’ -perhaps because it is too phonetically close to ‘pineapple’ – and instead he presents us with an ‘apple-pen’, potentially poking fun at, or paying homage to Cupertino’s tech giant, or at least offering the viewer to make that association. But the suggestion of ‘pineapple’ derived from the pen-apple combination proves too much to resist and the next line joins yet another fruit with a pen. But is it the same pen, or a different pen? Piko-Taro doesn’t explicitly say he’s using the same pen. ‘Pen-pineapple apple-pen’ suggests two different pens and two new objects, but what if they are connected by a hyphen and the pen or pens skewer both fruits? As with all true surrealist art we are left to draw our own conclusions, though there is an undeniable suggestion that ‘pen-pineapple-apple-pen’ might in fact be one object.

This ambiguity is part of how the symbol works, but this is not a classic surrealist case of taking an actual lobster and an actual phone and combining them, here we are more in the realm of John Lennon’s first encounter with Yoko Ono and the exchange involving invisible hammers and nails. Like Hitchcock’s shower scene in Psycho it’s what we don’t see that exerts much more hold over us than what is clearly depicted. One interpretation is that Piko-Taro is a pathological liar. It’s patently clear that he has neither pen nor apple. We are never shown these objects. Perhaps we take him at his word, but does he deserve our trust? Why should we believe him? But though distrust may be the rational response, the audience willingly suspends its disbelief and plays along, happily accepting not only the apple-pen but the postulate of a pineapple-pen too.

The penis mightier than the sword. Why take a pen to a piece of fruit when a blade would be more useful? Dodgy Piko-Taro has transformed the fruits from potential sources of vitamin-filled fibrous sustenance into something entirely different, though what remains unclear. By removing them from their natural context he re-imagines them as something to be skewered with a pen.

But it is the manner of the meeting of the juicy flesh and the rigid shaft that perhaps gives us the greatest insight into the deeply Freudian symbolism of PPAP. This is not a peaceful mating; it is a forcible conjoining with little or no element of foreplay. There is a latent aggressiveness inherent in this unlikely coupling, accompanied with a coarse pre-linguistic animal grunt. The apple has no say in the matter and once penetrated is quickly discarded for the next unlikely, but more exotic victim.

Everything is just an object to be used for his pleasure and entertainment and having achieved this unholy union of pen and apple and pineapple he raises his arms like some high-priest invoking the heavens sealing a pact made with the viewer who is now a complicit enabler and witness to this rather unsavoury individual’s fruit fetish.

Have a song or music video you would love to psycho-analyse? Or did you do a unique cover of Piko-Taro’s PPAP? Send your writings over to [email protected]