“Poetry is a form of prayer,” Sheena Baharudin says

All images by Charles Chiam

“Prayers come from within and to articulate it is to share your soul. You beautify language to reach out, to spread good energy, and express hope that things will turn for the better,” spoken word poet Sheena Baharudin says to me.

We were talking to each other at a multidisciplinary spoken word poetry performance held to celebrate the release of two poetry books by Sheena and fellow poet Alana Azlan.

While Sheena’s All the Bodies We’ve Embraced was released in June this year, Alana’s A Female Called Psyche got its release this month. Published by Selut Press, both books document theology, philosophy and psychology through the eyes of two Malaysian women in the form of poetry and letters.

Held at Twenty20Two and hosted by Numinous KL, the event was appropriately named “Love Letters to GOD”. And that was what got Sheena linking poetry with prayer.

“When thinking about the title for the event, a lot of the titles that we went through did not really stick, except for Love Letters to GOD,” Sheena says.

Held recently, the performance saw a mix group of talented artists showcasing their fluidity with the spoken word, wowing the audience with their craftsmanship of language. 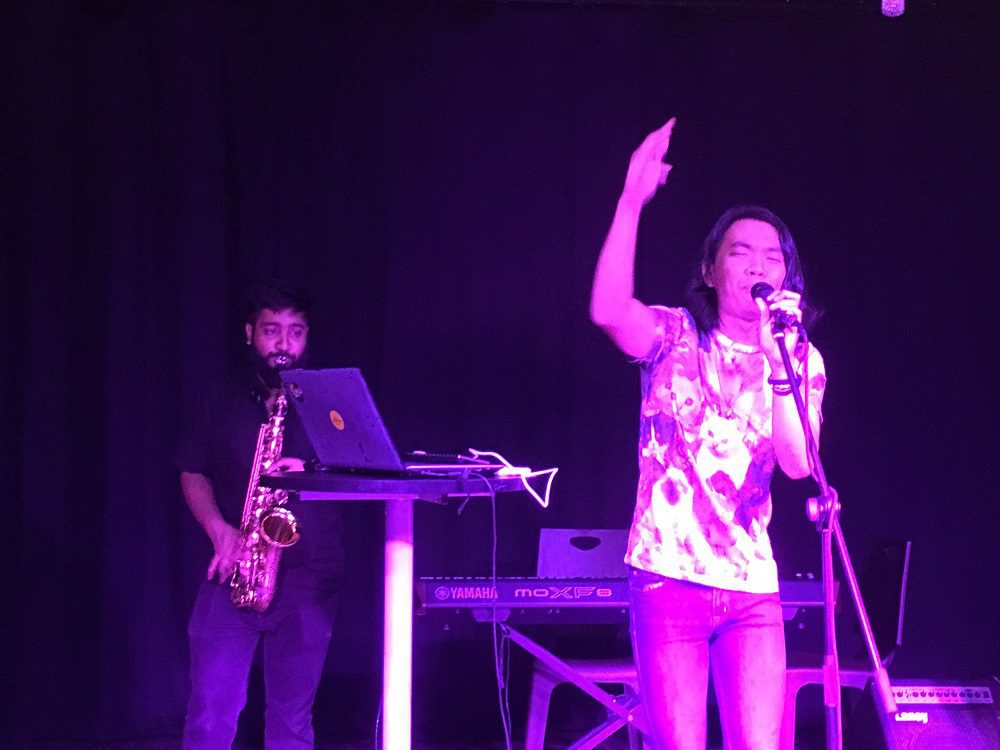 Supplementing their poetry with music, gestures and the occasional audience interaction, these beautiful poems ranged from the energetic to the slow-paced. Among the performers were Azizan ‘Afi, Dhinesha Karthigesu, Elaine Foster, Lily Jamaludin, Muslim Sahib, Axam Maumoon, Cheyenne Alexandria Phillips, Alana and Sheena.

With titles such as “For My Friends”, “Sonnet for How to be Good”, “Write”, “Dystopic Snowflake” and “Ulek Mayang”, all of them showed the performers’ souls and spirit, while sticking to the theme of humanity and divinity.

“As you explore reading and writing poetry, you begin to notice similarities between poems and holy scriptures. The most noticeable is their use of poetic devices,” Sheena explains to me.

How I see it; when a spoken word poet comes on stage with the intention of connecting to people, they become an instrument of the Divine.”

Sheena believes that the stories we tell are not based on things that happened when you are writing in your room. It happens when we are out there, looking at the faces around us, getting to know them and telling stories that hopefully touch them.

“Even if the poem touches only one person in the whole room, that is more than enough.” 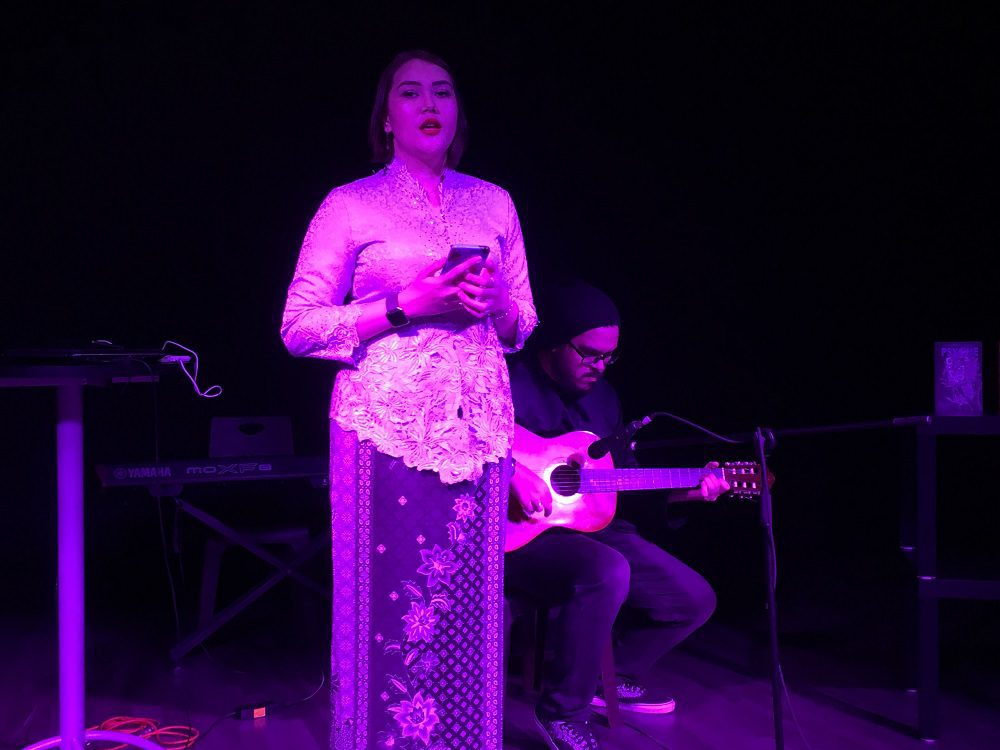 It is this theme of human connection and establishing close relationship with fellow humans that inspired the title for Sheena’s book, All the Bodies We’ve Embraced.

“It’s about connecting with all those I meet, and the hugs I give if they let me. I like hugging,” she quips, laughing.

Sheena’s understanding of god is in itself a nice blend between Sufism and to a certain extent, Pantheism.

“Whatever is right that come from you, is an inspiration from the Beloved,” she says.

When you share stories, it becomes more than just about you. You communicate with those who share a similar experience and find a spiritual bond with them. Everything is godly. You absorb it all, and share it via storytelling.”

She further adds that god should not be used as a tool or an excuse to control the masses.

“When you say ‘God wants you to do this’, or ‘God forbids you to act this way’, are you really speaking on behalf of God, or merely enforcing your values on others?

“In a way, spoken word performances is a response to such attitude. Within the sacred space of a performance, the poets can express themselves without being judged.” 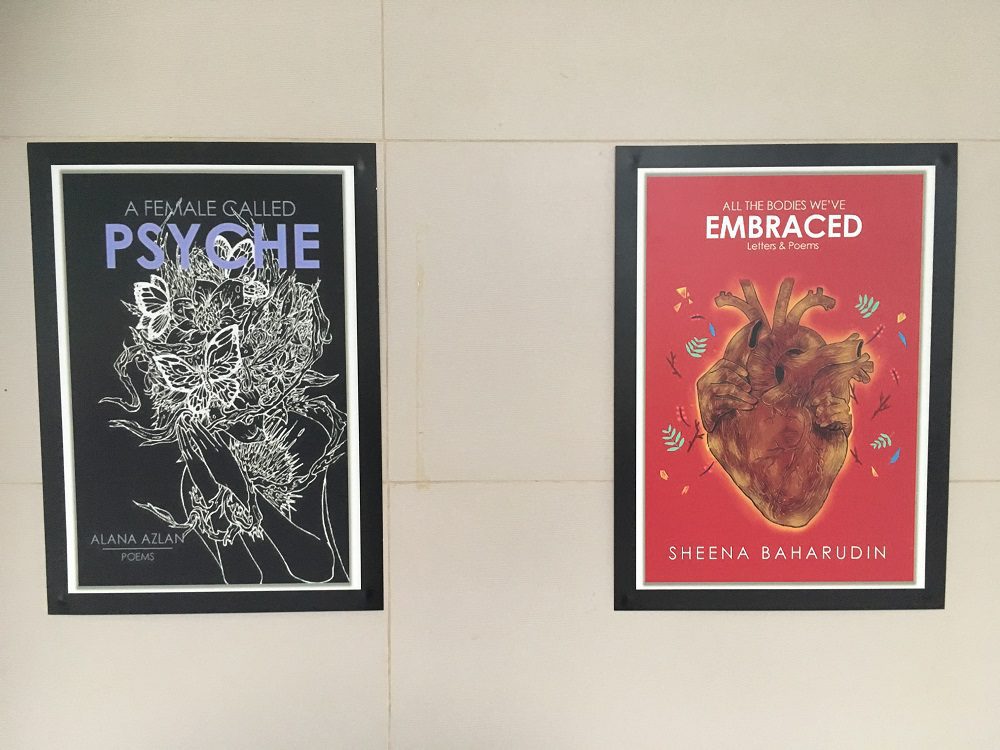 Dubbed a Muslim feminist, Sheena says most of her poems talk about the female experience.

“I am critical of the conservative views on religions, especially in regards to the treatment of women. I speak as a female, of femininity, and its divinity. I am a woman speaking out against the limited interpretation of religions.”

Sheena Baharudin’s All the Bodies We’ve Embraced can be purchased here while Alana Azlan’s A Female Called Psyche can be obtained here. Follow Sheena on Instagram and Facebook. Want to know more about Sheena? Check out a previous feature we wrote on this amazing poet! If you are interested in podcasts on spoken word performances, or keen to keep track on upcoming performances, you can follow Poet X on Facebook and Instagram.