“How about pig logo on corrupt politicians?” Fahmi Reza suggests

Earlier today Muslim Consumers Association of Malaysia (PPIM) had suggested that all porcine-based products should come with a pig logo (logo babi).

PPIM president Nadzim Johan’s reasoning was that this move would assist in avoiding confusion among Muslim consumers. He added that this suggestion follows after the association had received complaints from those who had accidentally purchased such products.

“Many Muslim consumers are not smart. If I say they are stupid, it will agitate people, but they are not that smart.

“They consume everything (blindly). So I suggest we should have ‘Logo babi’, otherwise they would eat this as well,” he was quoted by Malaysiakini while pointing to a paintbrush.

In response to this, activist Fahmi Reza, who frequently uses art to protest, uploaded a cartoon image of a pig in a suit on Facebook with the words; “Koruptor – Babi Berlagak Nabi” (Corrupter – A Pig Posing as a Prophet).

“Persatuan Pengguna Islam Malaysia (PPIM) just suggested a pig logo to be pasted on all boar bristle brushes to avoid confusing among consumers.

“If this is the case, I’m suggesting pig logo such as the one in this image to be pasted on all corrupt politicians to avoid confusion among voters. Who is in support of this?” the description on Fahmi’s image reads.

Despite facing trial following a charge under Section 233(1) of the Communications and Multimedia Act 1998 in June 2016, the activist continues to create artworks as a medium to show his disapproval at the state of Malaysian politics.

Infact, we have written a recap of the crazy awesome stuff he has done here!

Back to the pig logo, the Malaysian Domestic Trade, Cooperatives and Consumerism Ministry has seized 2,003 paintbrushes made from pig bristles, all amounting to RM10,988.94, The Malaymail Online reports. 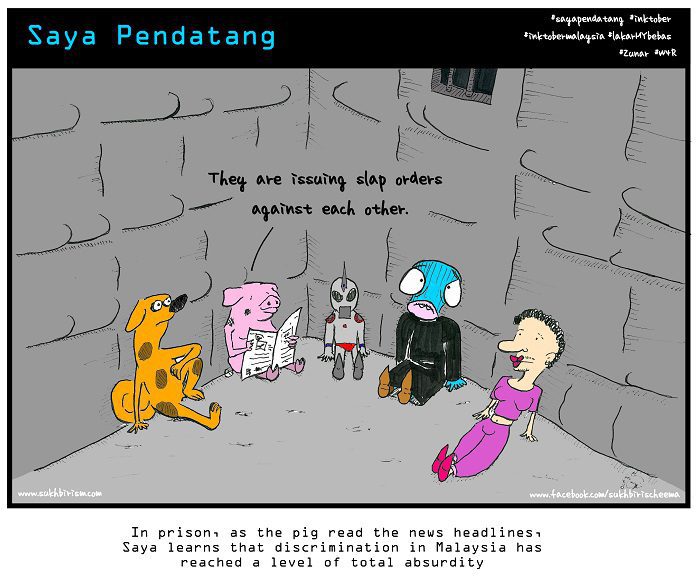 Its minister, Datuk Seri Hamzah Zainudin said the nationwide crack down were conducted as the products were found to have had violated the Trade Descriptions (Goods Made from any Part of Pig or Dog) Order 2013.

The products, he says, must be labelled and kept separate.

This is not the first time pigs have made the headlines. Infact, in Malaysia, it has become a common feature.

Last February, Deputy Minister in the Prime Minister’s Department Asyraf Wajdi Dusuki stated that “Pork Free” labels should instead be replaced with “Halal” labels. In June 2014, traces of porcine were allegedly found in Cadbury chocolates. Turns out, it was not true.

Well, atleast George Orwell might be happy if he was around.

What are your thoughts about Fahmi Reza’s suggestions? Drop us a comment below or send us your reply to [email protected]