Music Now And Here With Billie Blue & The Nowhere Men

All images courtesy of Billie Blue & The Nowhere Men

Folk rock outfit Billie Blue & The Nowhere Men are no strangers in the local indie music scene. Inspired by psychedelic bands of the 60’s, the four-piece band’s vocalist, Billie Blue Blackstone reveals to Eksentrika that there are more elements that inspire their music than what others would typically be led to assume.

Hey Billie! First of all, what does “Nowhere Men” signify? Why such a name for a band?

“Nowhere Men” is a reference to the Beatles song, “Nowhere Man” from the movie “Yellow Submarine”. That movie and song in particular had a huge impact on me as a child. We were looking for a band name that would compliment our musical direction and vibe. After playing around with what seemed like a million names, “Billie Blue & the Nowhere Men” felt right. 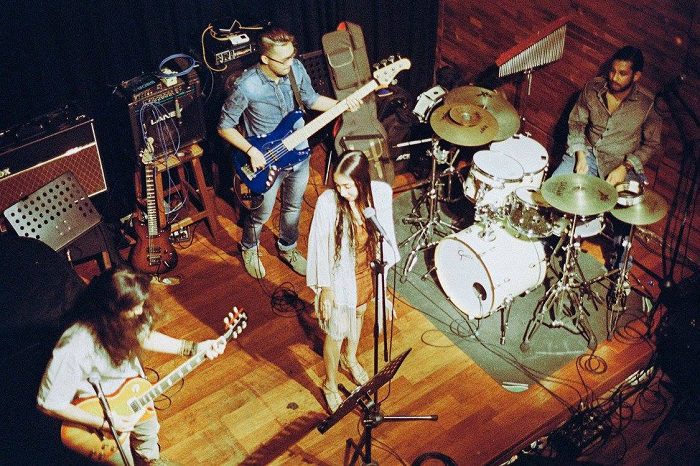 This is going to be a stupid question, but we’re gonna ask away. Is Billie Blue Blackstone really your name? How did your parents get inspired to give you such a unique name?

Blackstone is my father’s surname, so I inherited that naturally. My given name is actually Billie Blue Azalea. My parents named me after the Jazz singer, Billie Holiday. We had azalea flowers in our garden so they threw that in too. As for “Blue”, I think they just liked the sound of it.

What do you guys do aside from music? Do share with us a little more about yourselves!

Our backgrounds are completely different, but music is the constant that drives us all. I was born in Japan to a Malaysian mom and an American dad. I am 21 years old, and am pursuing an English degree online from a university in New York. Soheil, now 22, grew up in Tehran and is currently studying music here in KL. (Uncle) Reuben, 29, hails from Kajang and runs a cool catering company, which you should totally call for your events, and Icco, 26, comes all the way from Sabah and is a full time musician.

Your music has elements of psychedelia in them. What inspires you guys to create the music that you guys make?

Where to begin? We are inspired by literature, mythologies, current and past events, and human emotions – both the tangible and the abstract. Lately, through song writing, we’ve been attempting to capture a feeling and evoke that through the structure and flow of the song. Sometimes we try to weave a story from various little things that we feel are correlated and inspire similar moods.

For example, one of our songs, “Sea Salt Slide”, is inspired by a Japanese folk tale called “Okuri-inu”, as well as a feeling of needing to leave a place or a situation that once seemed welcoming. Much of the guitar work and some of the lyrical imagery is a response to “Okuri-inu”.

Our musical inspirations range from folk greats such as Crosby, Stills, Nash & Young, to rock n roll acts like Fleetwood Mac or Grand Funk Railroad. The raw, LSD-infused sounds of bands like Jefferson Airplane have influenced us a great deal as well. We always cite Led Zeppelin as a big inspiration because of how they incorporated folk, rock and blues into their music seamlessly; creating a distinct sound that was so particular to their band. But we also love a good amount of blues, folk rock and prog. Lately, we’ve really been loving Porcupine Tree and Pentangle.

There are constantly new sounds to play with and new feelings to explore. When we get into the thick of things, we try to forget about all of that and focus on the song at hand. Each song requires a different treatment after all.

How did you four get into music? Would you say it was by fate?

Each of us has had a very different journey with music, but I think that we all felt a connection with music pretty early on. I think that we can all recall experiences we’ve had with music that really wired us to want to be part of this. There are so many paths we could have chosen to follow, but we’ve all gone out of our way to be musicians.

The indie music scene is definitely mushrooming. There are various local bands that are as amazing as you guys. Do you guys view these bands as competitors or rivals?

There are indeed many other great bands around town, and its great to know that the local scene is flourishing. We don’t really view our peers as competition.

In a small scene like this one it’s so important to empower one another by being supportive and creating opportunities for fellow musicians in the community.

When we aren’t gigging, we love to go out and listen to other bands in the scene. There’s a lot of really interesting stuff to be found if you know where to look.

Speaking of competition, do you four feel that being competitive is archaic?

I suppose you could look at it that way. Healthy competition can be good but instead of focusing on outdoing other performers, I think we should be looking to keep the scene vibrant and thriving. Collaborations are always fun too. We’d love to work with other musicians in the future.

Any plans to launch an album? If yes, when can we expect it?

Recording has been on our minds since we started writing our own material, and we are currently working towards getting an album together. We’re still in the middle of the prep work, so no concrete dates are set, but we hope that 2017 will have good things in store for us.

What are some of the challenges that you guys have faced in the local music scene? And how did you guys overcome them?

Writing and performing own music has always been our goal, but before we started composing, we received some snide remarks from fellow musicians in the scene who felt like they had to go out of their way to let us know that they couldn’t take us seriously without our own material. Constructive criticism is really helpful and encouraging when you’re starting out, but deliberate rudeness doesn’t benefit anyone. In a small fish bowl like the local scene, it is really disappointing when people aren’t humble.

On the flip side, it can be tough to land a lot of gigs when you’re playing original music or music that isn’t mainstream. There isn’t a real formula for overcoming this, since everyone’s experience is a little different, but we’ve found that actively going out and meeting people is a great way to make connections and be heard. The internet has also been a great tool in getting our stuff out there. I think the scene has been warming up a lot more to the idea of original music in the past few years though, so hopefully it keeps moving along this course.