All images by The Kuala Lumpur Performing Arts Centre

Mention the Kuala Lumpur Performing Arts Centre (klpac) and immediately three things comes to mind; the theatre shows, the gorgeous location and the ever growing number of talented individuals churned out through the in-house programmes here.

You might be familiar with the The Actors Studio Seni Teater Rakyat’s (TASSTR) Theatre for Young People (T4YP), an initiative that consists of workshops and lessons on acting for a period of three months before culminating with a full scale production.

This programme, started out 11 years ago, has churned out a slew of talented individuals who have made their mark on television, film, advertising and theatre. 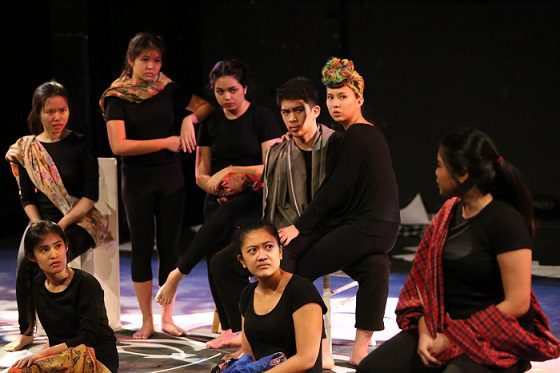 But what about playwrights? And even more importantly, what about the creation of more original local content?

These were the question that klpac’s resident director, Tung Jit Yang confronted when he was studying at New York University’s Tisch School of the Arts.

“Malaysia has a lot of stories to be told. But there is lack of platform available for writers and playwrights to showcase their works, let alone to stage or see them being published,” the 27-year-old laments.

Jit Yang feels that the lack of documentation or archiving in the part of the creative industry itself is the reason we find ourselves watching re-staging and adaptations of William Shakespeare’s works and studying scripts of foreign writers.

The idea for The New Play Project: Book One was born.

“Think of it as the T4YP for local playwrights. The process is almost similar,” he explains, adding that without playwrights, they wouldn’t be any stories to be told on stage.

“Over this extensive process, five plays were written, re-written, given up on, and taken back up again,” Jit says, adding that it was not an easy task as each playwright had to face their own demons throughout the process.

The demons of procrastination, of insecurities and fear of what would people think of their work right are challenges commonly faced by many creative individuals.

Jit Yang added that one of the playwrights, Joseph Ng, required more time to fine tune his script.

“It’s not an easy thing to write a script. Joseph said he was not happy with his script and I certainly do not want to publish or stage a script where the playwright is not satisfied with his work.”

But here we are, almost a year later Ridhwan Saidi, Adiwijaya Iskandar, Juno Hoay-Fern Ooi and Terence Toh will find their brand new, original, exciting and unheard stories published as an anthology by TASSTR.

The stories are diverse in their genre. Ridhwan’s Mautopia is set in a school amid the backdrop of a surreal-dystopic future. Adiwijaya Iskandar’s Mixtape for Maz on the other hand is nostalgic and yet painfully relevant to current times. Juno Hoay-Fern Ooi’s Plays Without Words & Action is experientially visceral while Terence Toh’s Restless is witty, humorous and yet spiritual.

Jit Yang hopes that with the staged readings of these four scripts and the anthology, theatre practitioners and lovers of the arts would have materials to study, critique and work with.

“I do envision to see these books being used as lesson plans for budding playwrights, theatre practitioners staging them. These are its main objective.”

Jit adds that he will be announcing submission call for The New Play Project: Book Two in the not so distant future.

For now, he hopes that the staged readings – which he describes as unique as they incorporate lighting, sound cues, blocking and costumes – will get more people talking about the initiative.

The New Play Project: Book One goes on sale for RM45 and can be purchased at The Kuala Lumpur Performing Arts Centre. Books will also go on shelves in bookstores in Kuala Lumpur in the very near future. Staged readings of these scripts run from 1 – 5 August at Pentas 2, the klpac with an entry fee of RM 15 at the door. Book your seats here.