If you loved Buli and Kopitiam, here is your chance to learn from the screenwriter himself.

Na’a Murad’s Scriptwriting Workshop is back in its fifth year, and it’s open to anyone 17 years old and above. The word ‘intermediate’ may scare some of us, but Na’a explains that the intermediate part is not a requirement of the participant, but rather a detail of the workshop template itself.

More about the workshop at the end of this article. First, we ask Na’a if he can surprise us with things few others know. As it turns out…

1. Not on every 9-year-old’s birthday wishlist

“When I was 9 years old, I wanted a typewriter for my birthday,” reveals Na’a. “Funnily enough, my parents didn’t think it was weird. A typewriter may have been rather expensive then, but I think they must have thought, a typewriter is related to work, so it must be a good thing! (laughs). So they got me a basic typewriter.”

2. Scriptwriting was a means, not an end

“I wanted to be a filmmaker, so I went to film school.” This was in Los Angeles, though he admits that there, they didn’t put much emphasis on script-writing. Because of this, “I never saw myself as being a trained scriptwriter.”

He returned to Malaysia, where “the way to be a director is to start as a cinematographer or an editor or do production work. I liked editing but I didn’t want to do anything too technical. Being an editor you are only involved at the end of the production; I wanted to be around on set to learn, to see everybody and to hang out.”

So Na’a started out with production work “and then I realised I was terrible at it. I’m not a very organised person. It’s like being a disorganised stage manager, the show will rosak.”

What he could do was write, so he decided to go into scriptwriting. “After writing for several telemovies and sitcoms, and getting into theatre, I realised scriptwriting was a more organic way for me to get into directing.”

3. He advocates better understanding between directors/producers and writers

“I believe that producers and directors in the film industry do not usually understand scripts,” says Na’a, adding that it’s different in theatrical circles. “Theatre directors are usually good script readers. Even though we have some very good directors visually, they have yet to know when they’ve got a bad script. And that doesn’t make them a bad director, but just a less than complete director.”

That is where the real struggle for scriptwriters comes in, he explains: “Our voice is not heard.” 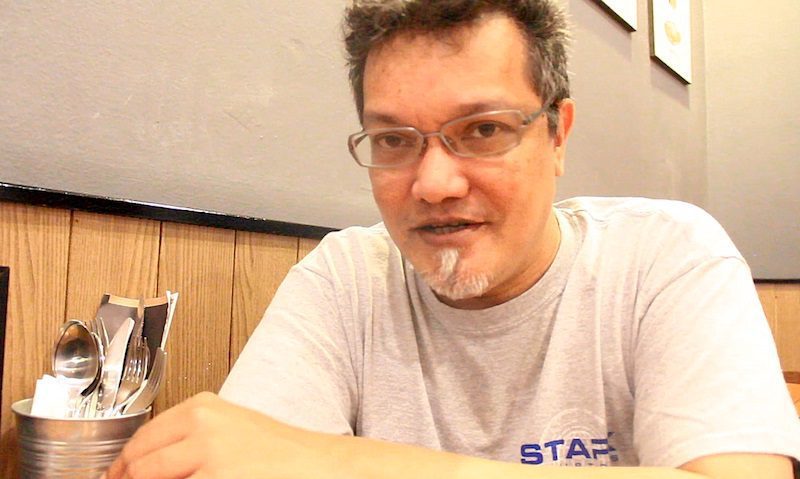 “Our job is important and you can’t give us too little time. Sometimes television productions make ridiculous demands, for example, insisting on rewrites a week before production day.” This puts pressure on the writer who then produces a script that has a lot of problems. He points out that this is not the writer’s fault, it’s more the lack of understanding of what a writer needs: (we) require time and not to be interfered with. Producers and directors need to be trained enough to see the problem with a script during the treatment itself, not changing it as they wish in the middle of production.”

4. He loves and hates his lonely profession

Na’a once wrote a play about writer’s block and being lonely. “It was called The Big Choke, and was performed in This Cannot That Cannot 2.”

So he’s all too familiar with the downside of writing, but at the same time, he admits that “working alone turns you into a creator.”

“Your imagination is the limit,” says Na’a. “You can sit down and create worlds, people, and conflicts. It is like when you go to a custom jewellery store where you can mix and match different beads and stuff – it is like that with scriptwriting. And that feeling when you see your creation come to life on stage or the screen, that is the greatest feeling in the world.”

5. He knows where the gap lies in Malaysian film and theatre

“When I was teaching in a film school, only four out of 20 students were the ones that actually wanted to write. I understand that writing is not a favourable role in our culture, especially in filmmaking, which is a glamorous industry.”

“People would rather be the director of photography or the director. Very few people like the idea of becoming the lonely person who does the work before the production starts.” However, writers are where the gap is in the industry.

More than more writers, “we also need better ones because the ones that we have are not trained. Even if they are, they have been working for so many years that they are now stuck in the drama Melayu mentality. They have been using the same formula and don’t want to do anything original anymore. They are more, can be more, and should be more than what the industry insist that they are. And if they feel that they are not, they should try to be more.”

Want to take the first step to becoming a scriptwriter? Join Na’a’s workshop.

“This is not a workshop for remeh-temeh methods and technical stuff like where to put your characters’ name and such…those are just a few things I will insist on to make script reading easier,” Na’a says. The workshop will focus on collaboration and involves a lot of analysing. Na’a will be showing examples in the theories he puts out, and they will be explored together as a class. “We will have many small exercises together. We will all get to work collaboratively, where the participants will share ideas and turn them into a richer story.”

“Anybody who is interested or curious about learning what scriptwriting is all about. Anybody who enjoys writing and always wanted to write a script. Even if they have never written anything, but they have the interest to.” Na’a also calls out to current writers. He welcomes “anybody who has written scripts and have not succeeded and felt like they need to learn a bit more.” Also “anybody who writes script in the industry but wish to write in a group of people or be in a workshop and discuss about the scripts they written.”

Na’a’s hands-on script-writing workshop starts this weekend (Saturday, March 11) and runs until March 19. Registration is priced at RM430 for repeat students and RM480 for newcomers. Here’s the Facebook event page.

Wanna know more about the workshop? Get in touch with Enfiniti Academy by calling +603 6142 8115 OR e-mail [email protected] Interested? Here’s more detail! Have a similar workshop coming up? Email us the info at [email protected]