On my first visit to the Land of Hornbills in 1998 I was convinced that it was dangerous to stay more than a week. Many of the native Sarawakians I met, both men and women, were so friendly, fun-loving and enchanting, one could only too easily become enamored, ensnared… end up marrying a local and becoming a permanent resident.

Since James Brooke’s appointment as White Rajah of Sarawak in 1842, adventurers, explorers and fortune-hunters the world over have found themselves mesmerized by the exotic allure of Borneo. Unable to leave, they have fortuitously enriched its gene pool.

Alena Murang is a wonderful example of this delicious blend of adventurous and indigenous DNA. Her father is a Kelabit of noble lineage, her mother Anglo-Italian. At 27 she is a fully accomplished visual artist as well as musician – having learnt from young to play virtuoso sape’ under the masterful tutelage of Mathew Ngau, Sarawak’s legendary sape’ master. 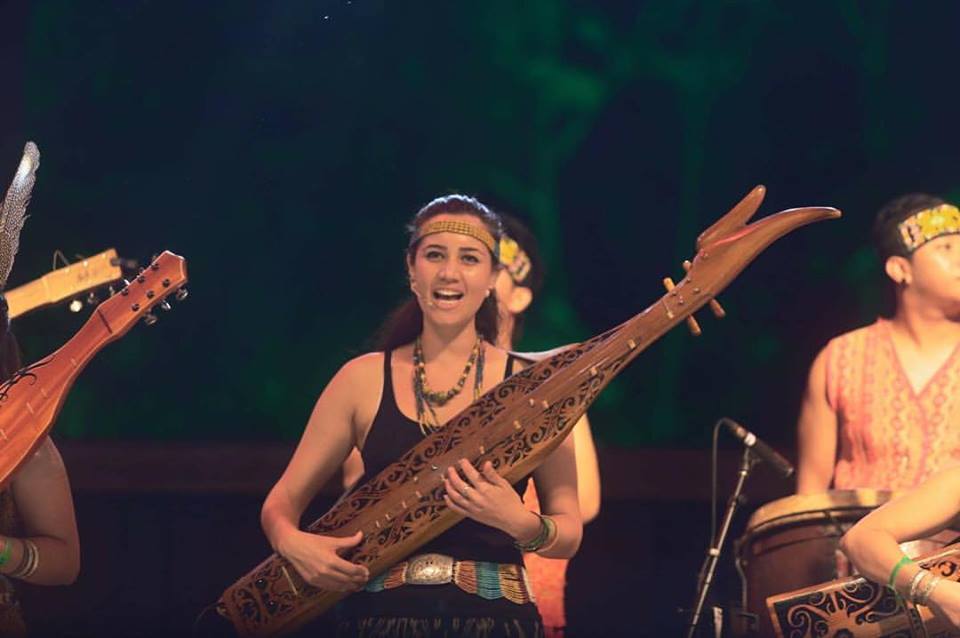 Alena’s alluring, mellifluous voice lends an angelic purity and ethereal dimension to the earthy simplicity and soul-soothing quality of these enchanting longhouse ditties. Her consummate skill on the sape’ and other instruments like the pagang (tube zither) gives a polished sheen to the entire production. Growing up between two worlds – the indigenous and the cosmopolitan – she effortlessly bridges both. The result is a melodious (and slightly melancholy) compilation of Kelabit and Kenyah songs with a refreshing contemporary sound and spirit.

Artistically as well as technically, Alena Murang’s Flight is an exquisite achievement and a monumental contribution to our efforts to preserve the cultural past. It creates new pathways into the hearts of ethnic music lovers everywhere with its enchanting lyricism and haunting atmosphere; and the inclusion of modern instruments like the clarinet, bass guitar, harp, and cello in the musical mix makes Flight pleasurably accessible to the modern ear, opening up boundless opportunities for the ancient sound of the Borneo rainforest to travel around the globe.

What sets Flight apart from many previous attempts to create an ethnic fusion sound is its impeccable taste and confident musicality. It never attempts to pander to popular taste, thereby destroying the innocence of these folksongs; nor does it lack in authentic passion and verve (which often happens when young people are trained to mechanically perform traditional music or dance at cultural events).

Sarawak has suffered a tragic loss of its natural beauty and biodiversity under the overlong misrule of robber barons. Yet it has produced an artist as gifted, dedicated and accomplished as Alena Murang. You do us all very proud, Alena.

Her debut EP can be downloaded on iTunes from her website

Would you like to submit a review of your own? Send to [email protected]