“More space should be made available for local musicians” Beverly Matujal

As a musician, tapping into the Malaysian audience can be a real pain, as singer-songwriter Beverly Matujal explains.

The 24-year-old who hails from Kota Kinabalu, Sabah rubbishes claims made by many that lack of interest in local music due to personal preferences is a contributing factor.

“It is no doubt easy to get your music out there if you’re signed under a big record label,” she says to me when we met at The Kuala Lumpur Performing Arts Centre (klpac).

Surely, this statement would make any local musician fume and seethe in anger. But Beverly put my mind to ease when she began explaining how she got into the local music scene.

Just like her fellow friend, singer-songwriter Amrita Soon, Beverly began her journey into music when she was 11.

“I did not know how to play any instrument. Most of the time, the melodies would come into my head and I’ll record them using my grandfather’s old Nokia phone,” she laughs. 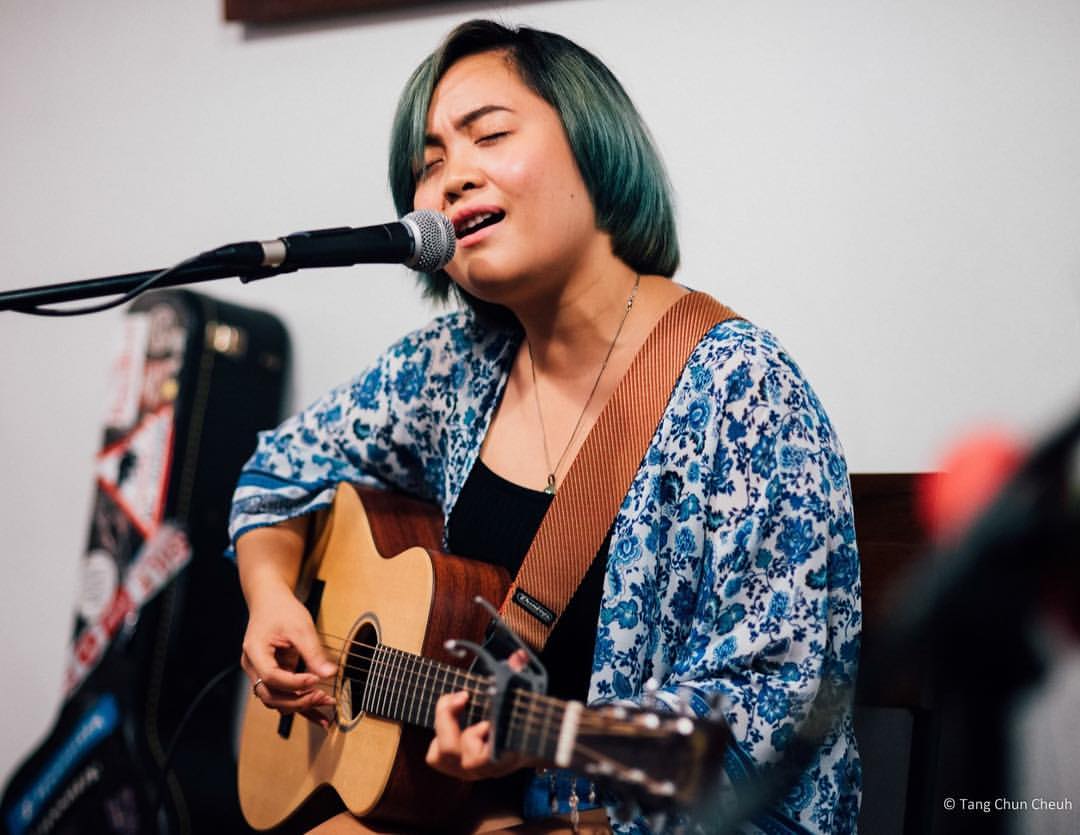 The choice of the Nokia was because her grandfather was not tech-savvy, so Beverly knew no one would find out about her naughty musical experiments.

“I was also really shy as a kid and found it difficult to express myself. So I used to write some of my songs in my exercise books which would then be turned into music.”

Her father being a musician himself, was the only one who could relate with what Beverly was going through. He is also her source of inspiration.

Upon seeing his daughter’s interest in music, Beverly’s father began sending her for numerous piano lessons – which she would quit after a month or two.

“I don’t know if it was because the piano teachers were too strict or I was too lazy, I would quit and then after a few months join another class,” she quips.

A year on, with the basic piano knowledge that she had accumulated, Beverly began playing the piano by herself. And soon, the guitar.

“It was all through trial and error. Mistakes, after mistakes.”

But it took her 13-years-later to have the courage to pursue music.

Having adhered to her parents’ wishes of completing her degree in Mass Communications, Beverly has allowed herself ample of time this year to work on her first EP which is set to be launched on August 26, at Merdekarya.

“echoes”, according to Beverly is all about pining, unrequited love.

“I pictured myself in a large but empty hall and I’m speaking to someone but there’s no response except echoes bounding off from the four-walls.” 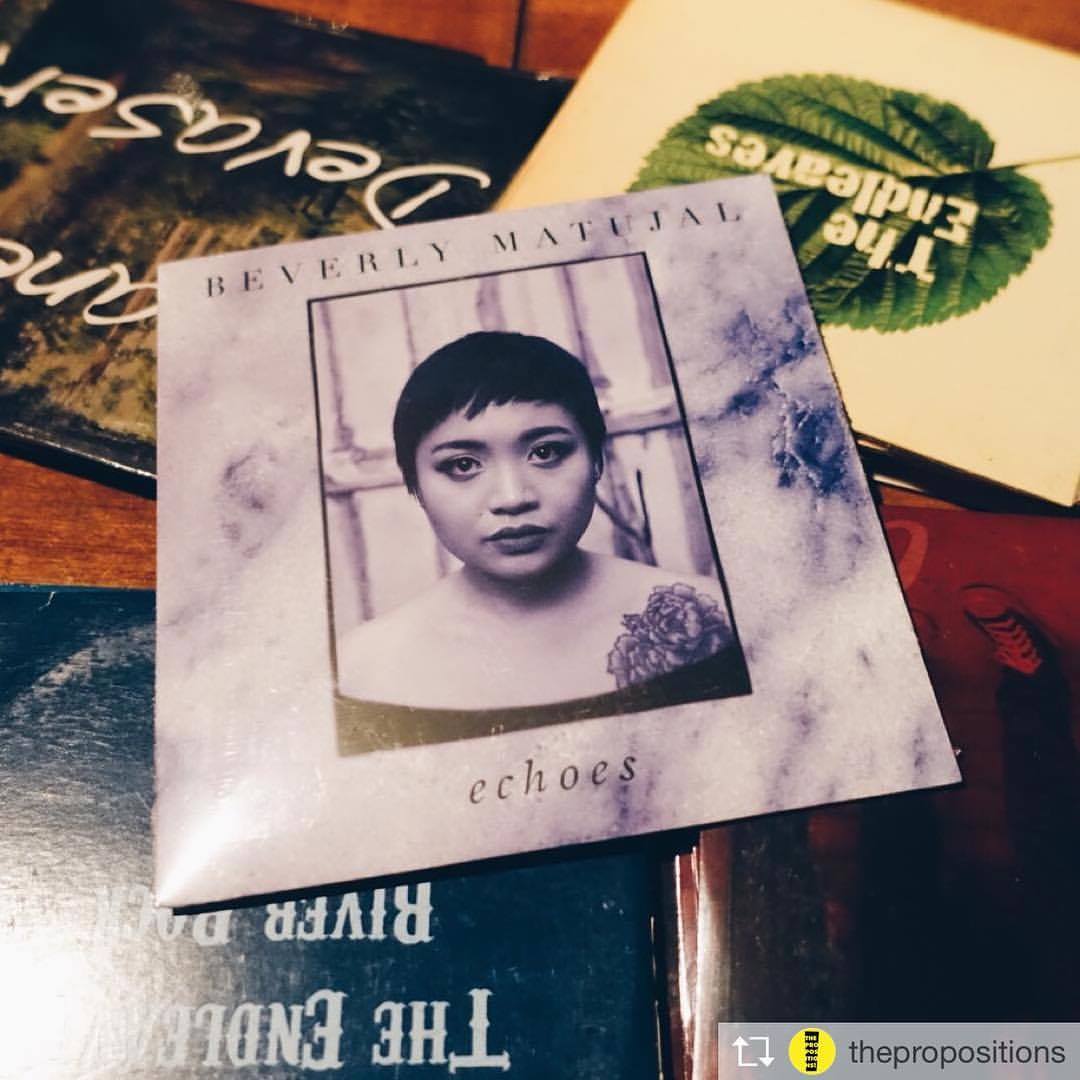 Just a few weeks back, I had the honour of being provided an early listen to her EP and boy, it’s amazing!

Right from the first track, “escalate” to the last, “admit”, Beverly has put in alot of thought to the lyrics and the composition of the songs itself.

Each track compliments the other and if listened together in one go, the listener is given a first-hand experience into Beverly’s journey as an individual who is just as vulnerable and courageous as you and me.

My favorites have to be these two tracks because of the sheer honesty in them.

In “admit” Beverly demonstrates her vocal prowess as she admits her fears and insecurities but also reconciles with the fact that she one has to and will move on ultimately.

Though the music is a little slow paced, it does make a soothing easy listen, serving as a balm for anyone who is nursing a broken heart.

Beverly did not produce this EP through a big record label. Infact, she saved up RM10,000 through her hard work with a portion of it coming from her supportive parents.

The EP is self-funded and produced by Angie Farr. Majority of the tracks were penned three-years-ago.

“I agree it is hard to put your music out there. But there is always a solution,” Beverly says.

The singer-songwriter believes that there should be more venues the likes of Merdekarya, The Bee and Gaslight Cafe that allows young Malaysians ample of opportunity to unearth and appreciate the plethora of musical talents that are currently available in Malaysia.

We need more and more event spaces where musicians can express themselves creatively. The problem is, many of such venues are obscure or hidden from the public eye.”

This usually results in lack of attendance at some of these spaces.

“It’s unbelievable that many Malaysians actually miss out on real good musical acts because of the location of the spaces itself.”

True to relating with the sentiments on the ground, Coebar Abel together with klpac have been organising the intim sessions.

The intim sessions are basically an hour long acoustic music performed at an intimate setting (indicine) on a quaterly basis. 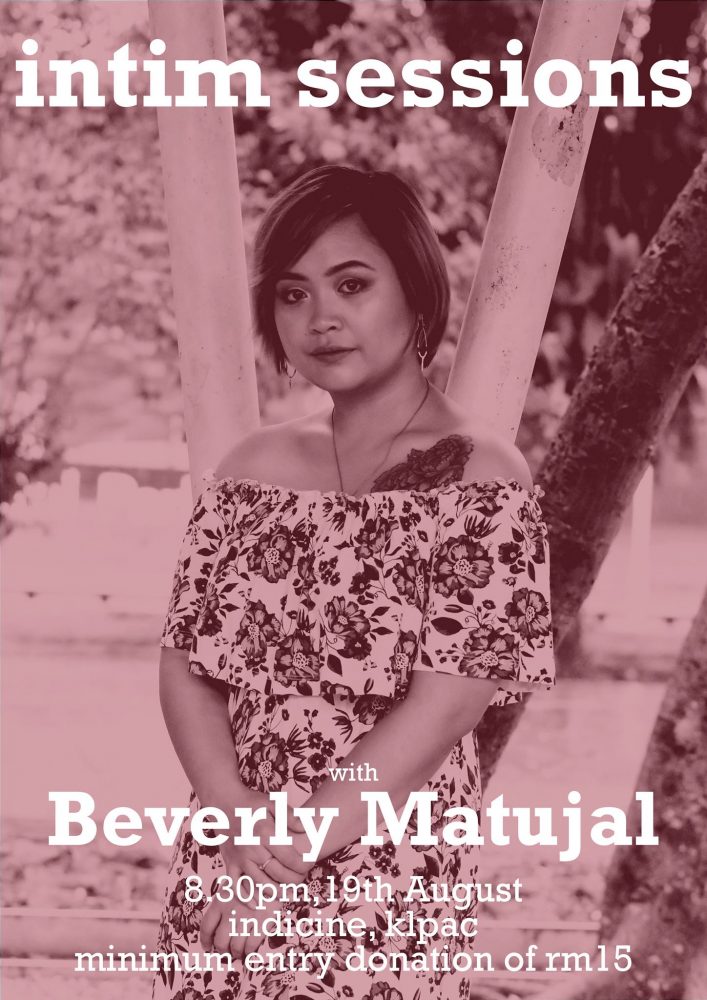 “The aim is to create an intimate space for local musicians to express and get their music out there,” Coebar, who himself is a musician, says.

“This is our way of letting others find out about the immense musical talents in Malaysia.”

The fourth edition of intim sessions is set to take place on August 19 at indicine, klpac at 8.30pm. Entry is a minimum donation of RM15. Beverly would also be bringing along her EP for those who wish to purchase physical copies! Follow Beverly Matujal on Facebook, Instagram and Youtube!