These are the ingredients of Hollywood blockbusters, Korean serials, and films on Netflix – but not when it comes to characters and stories in Malaysian-made films.

Here are 10 Malaysian films that have faced official and unofficial censorship. The Malaysian filmmakers behind these films reveal just why they decided to make these films which, unfortunately, have been deemed as “sensitive” by the Film Censorship Board of Malaysia (LPF). 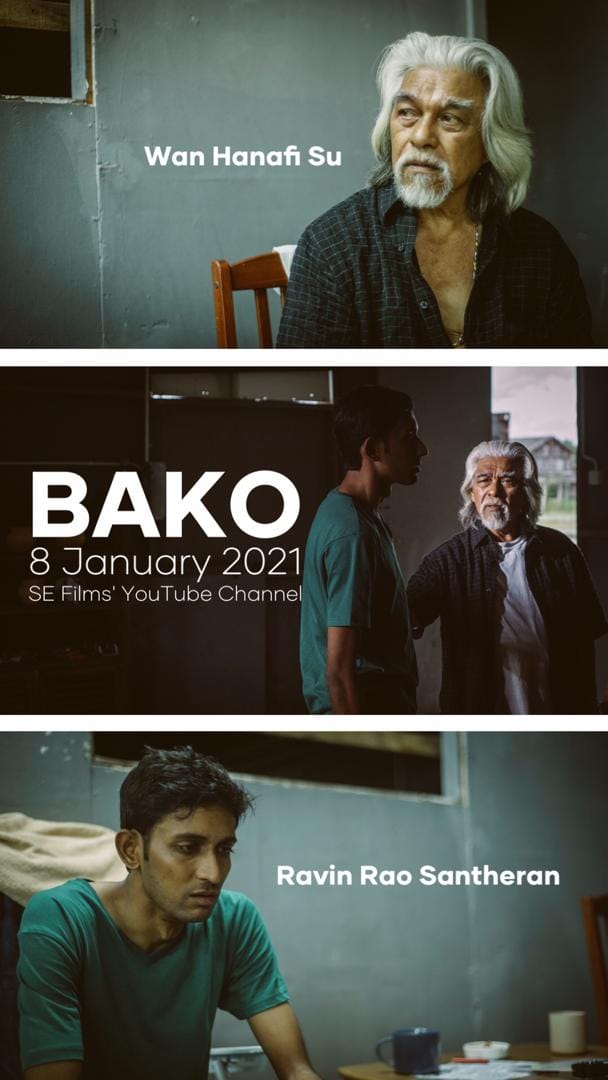 Two morticians, an apostate old man, and a religious Hindu young man come across a body that cannot be burned. The ensuing conflicts shift their perspectives on what they believe.

“This film was made to showcase the varying perspectives about religion in the multicultural landscape of Malaysia.  I made this film to shine a light on atheists, especially the apostate community in the country. They exist and they matter.

“When I found out that BAKO was banned, I was disappointed because people keep treating religion as a necessity rather than a belief. This is more frustrating when this leaks into the creative field. Atheists are people just like most religious people. Pretending they don’t exist is the height of disrespect. By banning this film, the LPF is being disrespectful of these people.”

Gadoh tells a story of a group of teenagers who fought each other along racial lines; a cycle of hatred and violence further escalated by their environment and school system. What was to be a quick resolution to improve the school’s bad image, was taken as an opportunity for one teacher who believed that real change was possible.

She ropes in the help of an old friend and reluctant maverick theater activist for this arduous task. Is there hope amidst the cycle of discrimination that surrounds us?

“The year before I made Gadoh, I watched a political party leader pledge to uphold his race’s superiority by brandishing a keris live on national television. Till today, I see the word ‘pendatang’ still being used to describe fellow Malaysians.

“I identify myself as Malaysian, and not by my race. But I’m often identified by race first. This weaves a socio-political narrative of power and prejudice about me. And such a narrative persists because though we are of diverse culture and religion, we don’t talk about our complex identity, differences, and tensions. Race remains a great taboo. All too often, racial conflicts are swept under the carpet and stay unresolved.

Gadoh is an expression of my view of our society. With this film, I aim to spark conversations among fellow Malaysians about our perceptions, our differences, and our assumptions of the other. I hope we can learn to be better as a society, to be inclusive and not to judge the other, where we choose to see ourselves as human first above our race.” – Brenda Danker 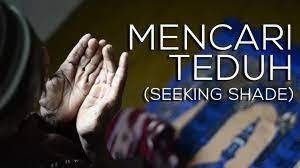 As of 2014, the UNHCR (United Nations High Commissioner for Refugees) estimated that there were over 100,000 Muslim Rohingya refugees living in Malaysia. This is one of their stories.

I made this film because I was angry. Growing up, I had known Malaysians to be very sympathetic towards the liberation of our Muslim brothers and sisters in Palestine and Iraq, and Syria. However, when the genocide of Muslim Rohingyas began flaring up in our nearby neighbour Myanmar, and the opportunity to extend aid to them had presented itself, the narrative completely
changed.

Malaysians either did not take note of the tragedies happening, or worse yet, deemed the Rohingyas to be subhuman, as can be seen on some social media posts today. It has been 7 years since I was angry. I still am. 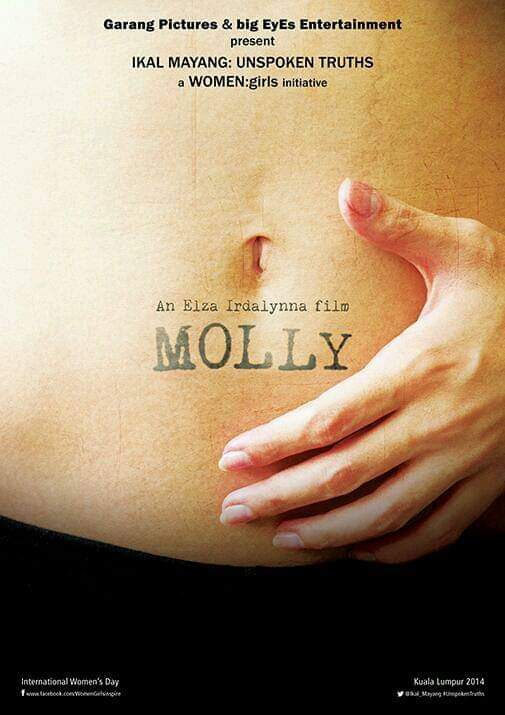 A story about unconditional love, support, and camaraderie between friends.

This is a true and very personal story to me, in honor of the friendship I have with my group of girlfriends, particularly during a very trying time. However, the film was censored due to what was insinuated in the story. Ironically, the theme that year for Ikal Mayang was Unspoken Truths.

I want this film to depict how common this issue is, and hopefully, destigmatise it and empower bodily autonomy. 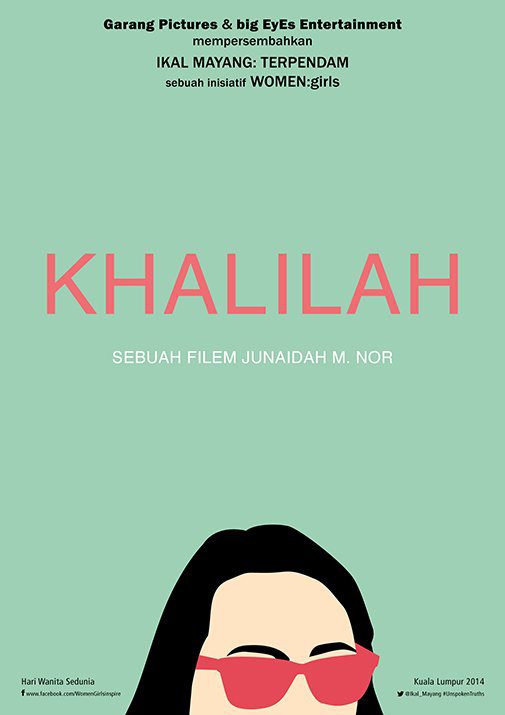 Malay girls are often referred to as ‘virgin child’ in family conversations as it is obviously the expected norm. 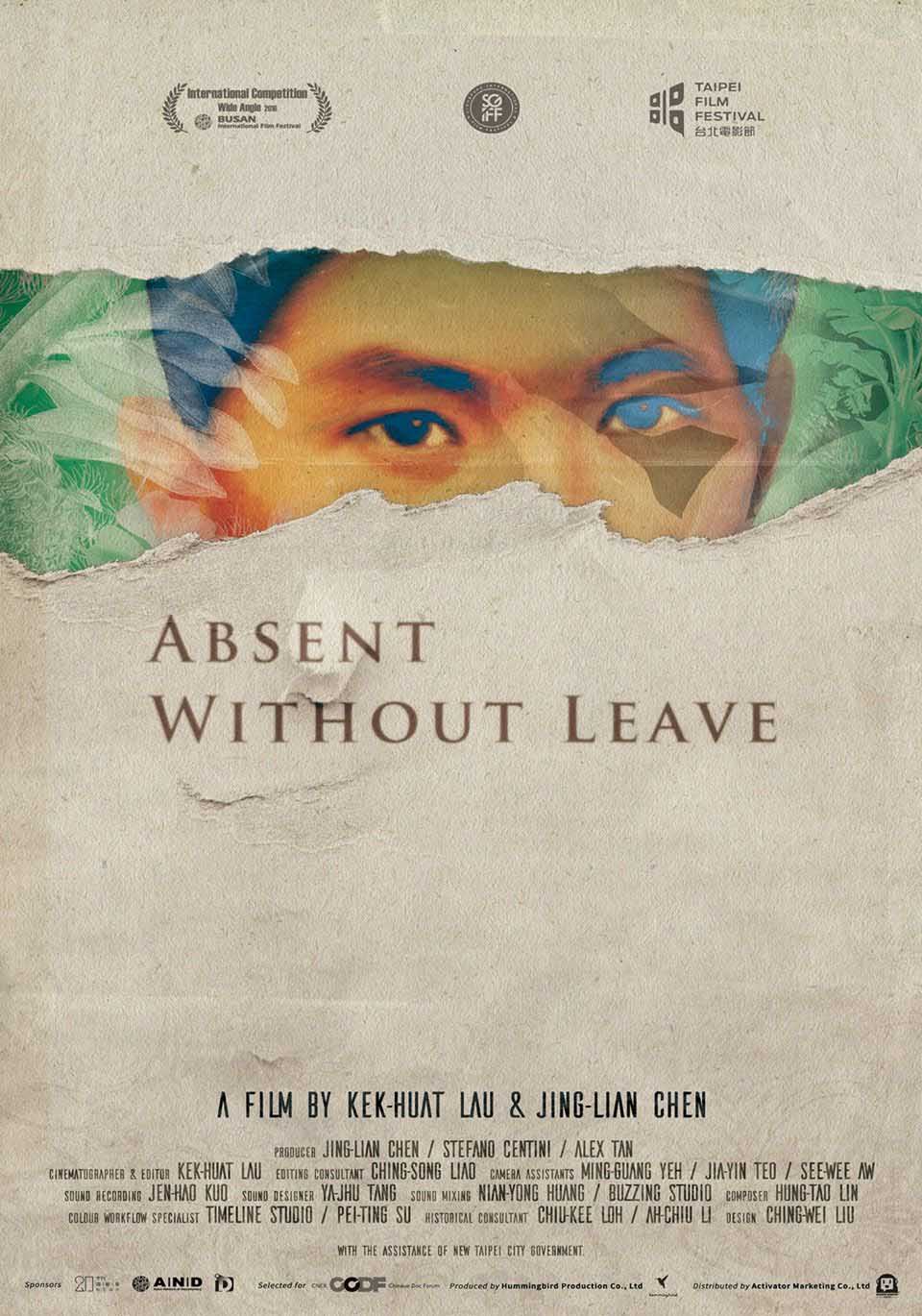 This story begins with a man’s portrait hanging in my family home in Malaysia. The identity of this man has always been taboo, until one day I discovered it was my grandfather, whose identity was hidden from me because he was a member of the Malaysian Communist Party.

This film is a journey to discover the secret history of my country through the eyes of my grandfather.

When I found out the LPF banned the whole film, which I don’t understand, and was disappointed, why would a government so afraid of my little film?

Why would a government not encourage its people to better know things and be able to think independently and critically? People in fear and silence are easier to be manipulated, for that, we shouldn’t benefit them with our silence anymore. 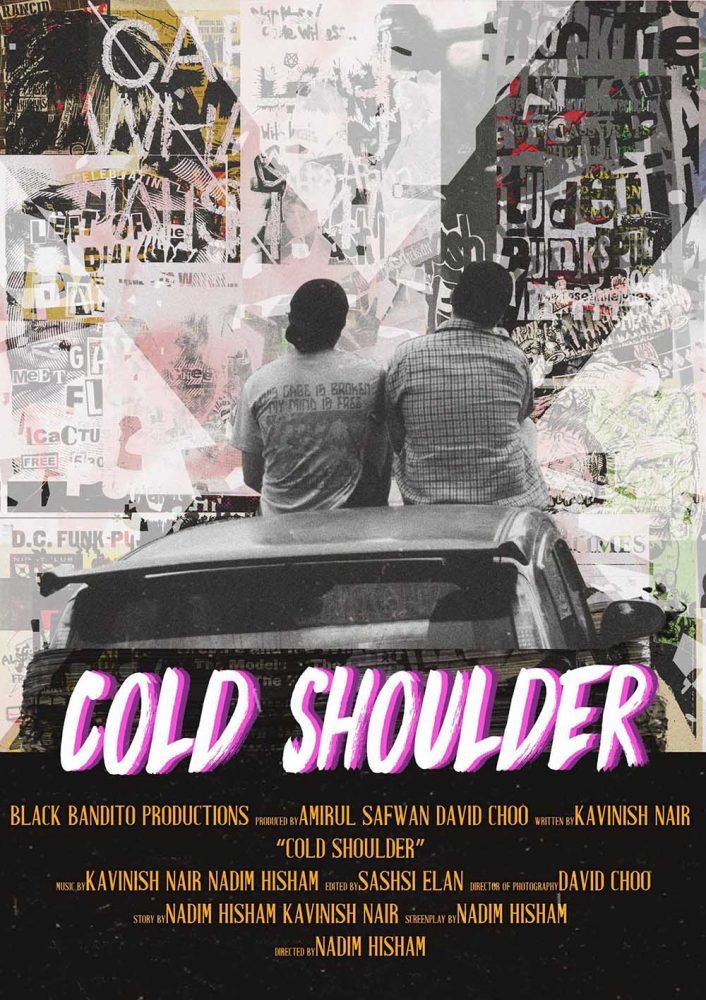 Two brothers from a straightedge band who have a falling out during a pivotal moment in their music careers are forced to confront their tense relationship after 3 years of giving each other the cold shoulder.

Even though dramatised, the essence of the film is real family struggles caused by alcoholism or drug addiction. In the film, it’s told by two siblings, an older unsuccessful “businessman” and his
younger musician brother. The older brother teaches his sibling the straightedge ideology which is to abstain from drugs and alcohol, but he succumbs to them in the face of his problem. This
breaks their close bond.

The LPF ordered us to cut out the act of the older Muslim brother drinking alcohol because it is not clear that he repents in the end. This is despite the fact that the film has an overall positive message of the brothers resolving their differences.

We felt that the LPF’s decision would result in a confusing and noncathartic viewing experience as audiences would not understand what split the brothers apart.

Personally, it feels problematic if society is not allowed to view such images as it hinders us from having a positive perspective while tackling problems of substance abuse. 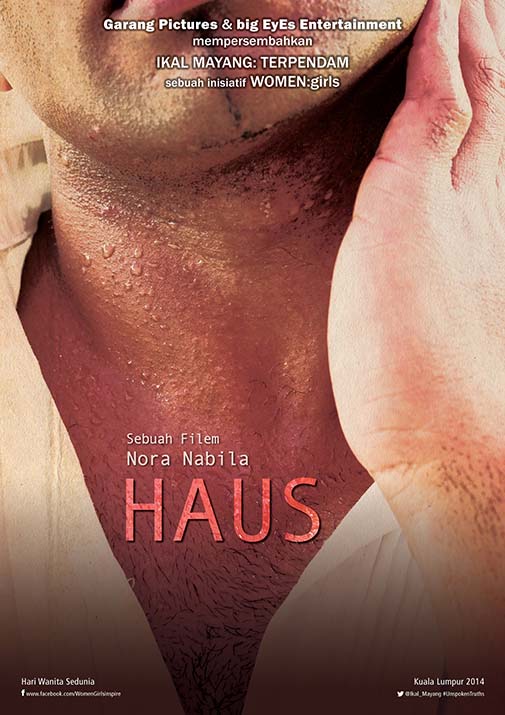 Puan Zaleha, a woman in her 40’s is suffering from sexual deprivation and a lack of attention from her husband. As a conservative Malay woman, she does not have a way out besides crying in silence, hoping her husband will notice. She is ashamed to have taken control of her needs. She starts to betray her conscience in the presence of her son-in-law.

For once, she needs to choose between the role of a mother and the needs of a woman.

Born and raised in a rather conservative Malay family and community, sex is not something that can be talked about openly even with one’s elders. It is ironic that a community that refuses to
discuss sex in a healthy manner but is more open to making jokes about sexual encounters.

For as long as I can remember, the topic of “women’s needs” is not open to discussion or acknowledged. We are taught to obey, to be polite, to listen, and to accept. Haus is not about a woman’s lust.

Puan Zaleha is a representation of every Muslim Malay woman who was raised to listen, to accept, and to obey. She is the ordinary “makcik” (auntie) that you come across on the street. She could
be the auntie to whom you buy your evening snacks of “keropok lekor” and “cucur udang”. She could be your “makcik cleaner” (cleaning woman) or your “Mak Su” or “Mak Ngah” (younger aunt,
middle aunt).

Haus was banned, but women will never be silenced. Not anymore.

Since 2014, Haus has been appreciated by a wide array of women from those living in low-cost flats to those working in corporations to film students. Haus is the voice of the woman that is unheard and I am proud to have made it. 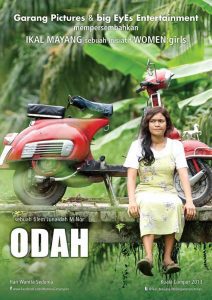 This short comedy film is about Odah, who wants to cut her hair short like the popular girl band, Feminin. However her decision is being fiercely opposed by her mother and the people of her village.

The film contains references that only long-time fans of Feminin will understand. 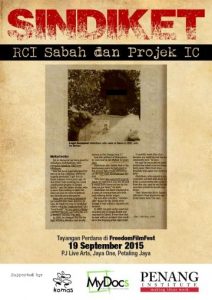 The Sabah Royal Commission of Inquiry (Sabah RCI) was established to investigate allegations that citizenship had been given to undocumented migrants from Indonesia and the Philippines in exchange for votes for the incumbent government.

However, the Sabah RCI has raised more questions rather than answered the existing anxieties of Sabahans. The Sabah RCI was asked, “Was the granting of fake identity cards related to politics?”. Many Sabahans believe that the answer is undoubtedly, yes.

However, the Sabah RCI denied a political link to what has become colloquially known as “Project IC”, an answer that has frustrated Sabahans. Sindiket is a search for the answers left out of the official “truth”.

When I worked with the CSO, Pacos Trust, in Sabah between 2014-2015, I was exposed to many issues such as indigenous land rights disputes and mismanagement in the Sabah government. I also started looking deeply into the Projek IC scandal and I decided to do a documentary so that Sabahans will learn that it was possible this scandal was masterminded by certain political parties.

I am disappointed that the film was not approved for screening as it was my hope that Sabahans know who was behind Projek IC. Sabahans have long suspected that Projek IC existed and hoped
that certain political parties would no longer receive support because of it. I have personally met people who received ICs, they are usually small-time labourers.

It is not fair that my film is not approved for screening by people outside of Sabah. The people who did Projek IC are people from outside of Sabah but those who have to shoulder the burden and
its problems are Sabahans. 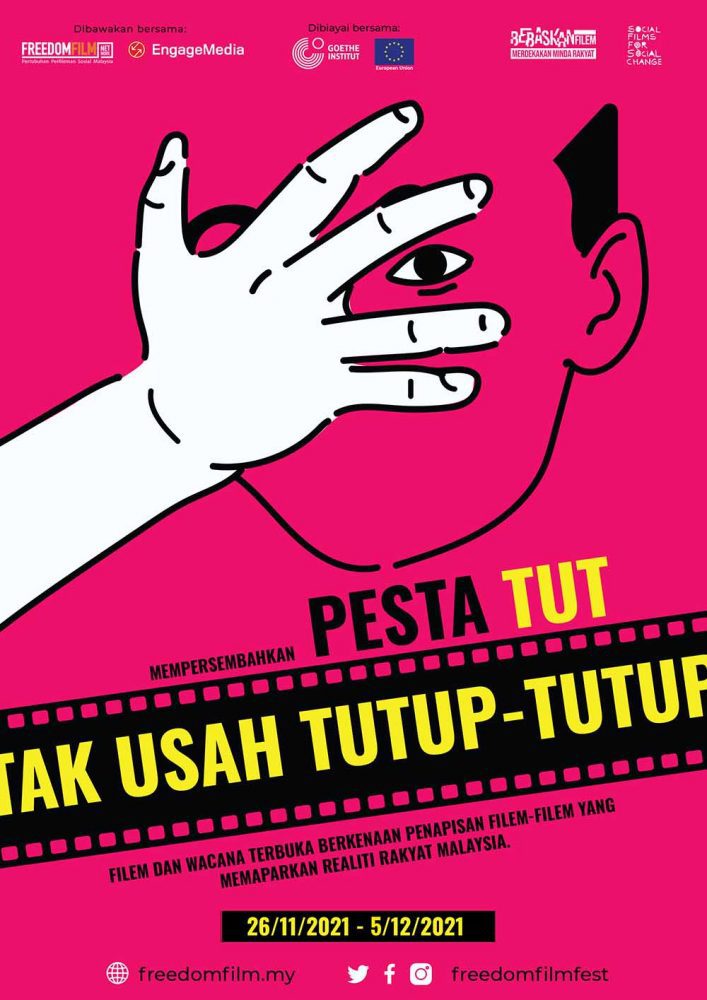 Watch all 10 censored Malaysian films by these talented Malaysian filmmakers at Pesta TUT by Freedom Film Network for FREE from 26 November to 5 December, 2021. Register here.