This Malaysian Dad drew comics of life with his autistic son for an hour daily…and turned it into a video!

Art is healing and supportive.

Don’t believe me? Well, you’ll have to check out this inspiring video by Faizul Khalid aka Zulkha, on the trials and tribulations he faced as a dad to an autistic son.

It was supposed to be released last year but due to series of personal events, Zulkha coudn’t complete it in time.

Instead of shelving this project idea, he set work to it, dedicating at least an hour on a daily basis, despite the stress of moving to a larger city, from Kapit to Kuching in Sarawak, working and caring for his son at the some time.

“I used to steal an hour from each day to draw, sometimes waiting until Kharnain fell asleep to work on it.

“I began by drawing the storyboard for my video idea, which was supposed to incorporate real footage of myself and my son,” Zulkha tells Eksentrika.

However, Zulkha had to improvise at the time, as his buddies were not available to help him pull off the live re-enaction.

” I was attempting (to draw a story board) for the first time and it felt awkward at first, but eventually I got the hang of it and started to enjoy the process.

“I was inspired by a Ninja Turtle movie I had watched then, which had started off with a comic style and layers of moving montage, that’s why there’s trace of similar elements in my video. In the end, the story board ended up being the final product.

Finally, after five months of artistic toil, Zulkha was ready to release his work on March 27, 2O17. 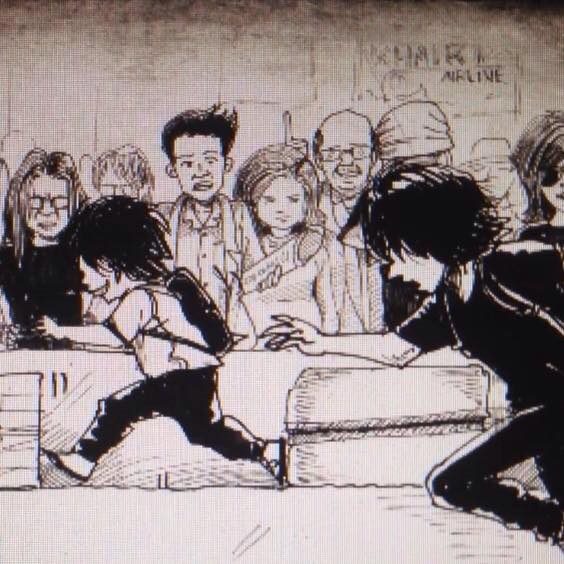 He titled the video, “Tuhan Menduga Kita” (God tests Us), which is a series Zulkha’s hand-drawn comics accompanied by a song of the same name, with the lyrics and vocals by Zulkha himself.

Not only that, this 37-year-old multi talent also compiled and edited the video himself.

“I decided to share about autism mainly for parents to become more aware of certain behaviours that their child might display. I too, was such a parent once, searching for answers to explain why my son seemed different,” Zulkha tells Eksentrika.

“Many mothers frequently say, it is the fathers who cannot accept the “strangeness” in their child. This is another reason that spurred me to write about autism,” he adds.

“A father is the head of the family, and decides the way for the family’s direction, whether towards healing and happiness or destruction.

The quicker we can face facts, the quicker a child’s intervention can begin and the better the end results. The worst is if both parents are unable to accept the reality. It makes me sad for the child’s outcome.

“It’s okay to “Redha and iktiar” (surrender and hope). Apart from constant prayers. Every challenge has its silver lining, and the burden of trials we face might be lessened by coming to terms with His gifts,” says Zulkha.

Zulkha, who is an architect’s assistant by proffession, said spending the hours on his art project helped to ease his mind, giving him peace despite a stressful events in his daily life.

“I love art and music as well, although my musician days are quite behind me now.

“When I used to jam in studios, I used to let Kharnain explore the instruments to strike his interest. I also taught him how to draw but he seems to show more interest in words and numbers.

“As early as 4 years old, he already knew how to operate a computer, although I had never taught him properly.

“Perhaps his interest in art will develop only later. However, I feel there is no point forcing him to take  up an interest. Children should be guided, not pressed. He might develop interests in other things.

Zulkha says he could not speak for his son’s experience with art but believes art can still help children with autism explore their imagination.

“I can only speak based on my own experience how art has affected me personally. Perhaps, art can help autistic children express their feelings, or whatever stresses that they might be experiencing inwardly.

“It can also help to train focus and stimulate their motor skills to be improved,” he said.

Currently Zulkha has also made his comic art available as T-shirt prints as a method to increase and spread support for Autism Awareness. This year also marks the 10th Autism Awareness Day, which falls on April 2 annually.

You can check them out on Zulkha’s Facebook page “Tuhan Menduga Kita”  for the T-shirts and also Zulkha’s video below. For those of you interested to hear Zuklha’s own word in Bahasa Melayu, check out a piece he wrote for Mingguan Wanita.

Do you still need convincing about the magic of art? Stay tuned on Eksentrika for more stories like this and look out for the Malay version of this article next week! Have you got an awesome story to share? Tell us at [email protected]