“Engge porrr… ennadei….,” they sang as their hands reached out to touch one another in what I guessed was a game of tag.

Whatever they were saying in the Semai language sound very much like Tamil, and I tried to join in the game by “tagging” one of the kids and singing like they did, “engge porrr.” which in Tamil roughly translates to “where to go”.

What follows is a peal of laughter that I took as acceptance by the Orang Asli children from Kampung Rasau, near Slim River, Perak.

“Yay!”I thought. “Score for getting included despite saying a Tamil phrase instead of Semai!”

Later, I learn I wasn’t off the mark at all for guessing Tamil, for what was truly…Tamil!

Tamil and Hindi films frequently played on TV and the kids were probably inspired to immitate Tamil speech upon seeing several new faces among the volunteers of Senikami, which were myself and Sitarey, Sukhbir and Tushar Ghat, who hails from Mumbai, India.

I was carrying Sitarey in a baby wrap, which probably helped the kids to overcome their shyness of strangers.

They swarmed near me like curious little goldfish checking out a wiggling finger in the water. But each time as I could almost reach them to “tag”, they darted away, leaving just their trail of laughter.

Amid all the excitement, Projek Senikami founder, Aneez Yuliani Yuslizar, 26, had been busy prepping the craft materials and tools for toys the children will learn to make that day.

In the pleasant mayhem, I notice more and more youthful faces appearing, peeking through the windows and doorways.

She gathers the volunteers and sets them out in groups, all hands on board to manage the students, who had turned up in more numbers than usual.

For the past two years, Aneez and a gang of friends have been making their way into Kampung Rasau, located on slightly hilly terrain surrounded by palm oil plantations, that doesn’t require a four wheel drive to reach but still quite a challenge for the regular sedan.

Through Senikami, they share with the children, art from all over the world.

Some days they learn to make musical instruments, which they have a blast with playing concert and other days, they make crafts, of toys, ingenious devices or simply paint.

Aneez says she likes to include bits on geography, to impart to the children, an idea about the bigger world, that they may someday explore outside the coccoon of home.

“We’ve taught them to make musical instruments from around the world, which is how I insert the bit about other cultures, countries and people.

“Then we have a little jamming session,” she tells Eksentrika.

Art is a universal language. You don’t have to look or believe in the same thing to know it. You can have your own interpretation,” says Aneez. 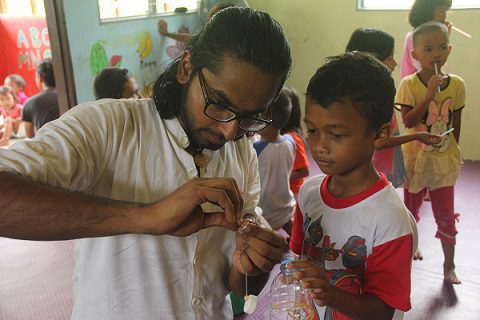 In a few moments, colourful plastic balls were shooting high in the air and a cacophany of whistling tunes started to build, from the plastic whistles the children had just made.

Aneez gets everyone to sit in groups to prepare for a “show and tell” of the day’s craft work.

At the end of it, three hours or so had passed by and my heart ached a little at having to part with the easy smiling, constant giggling kids.

I tell myself, I must try to join Aneez as a volunteer on her fortnightly visits to Kampung Rasau.

During lunch, we got to speak to her a little more about Senikami, which is founded by Aneez and two friends, Jes Ebrahim and Khairul.

We also found out that Aneez’s mum is the famed Orang Asli advocate lawyer, Siti Kasim. Suddenly, it all clicked.

I started doing this after visiting an Orang Asli village in Kelantan with mom. I feel that Orang Asli culture is very much interwoven with art.

The international relations student from Nottingham University, feels projects such as Senikami could leave a big imprint on the lives of Orang Asli children.

She points out how most urbanites have the advantage of sending their children for a variety of classes such as art, dance and music, which can turn into valuable skills in later life.

Most Orang Asli children are not so priveleged, although many among them are not inferior in talent.

“This is my way of giving back, something I feel youths like me can do,” she says.

Senikami welcomes volunteers and donations in the form of art supplies. If you’d like to join them, get in touch with Aneez through Senikami’s FB page. Are you changing the world with awesome art as well? Tell us all about it at [email protected]