How to discover your inner slam poet in Malaysia?

Are you a poet for the page or the stage?

This might seem tricky if you’re still juggling with the “Are you even a poet?” question.

But if you could discover the answer to the first question, clarity for your identity might ensue for the next.

At least, that’s what I gleaned from the low down with seasoned spoken word poet, Jamal Raslan. His name has been a staple mention since 2010, peppered throughout the scant news articles on the Malaysian spoken word scene. From what I gather in the tight circle of local poets, Jamal is considered an “otai” (senior) respected for his generous guidance towards beginners and seniors alike in the improvement of performance poetry.

When I first set out to interview him almost a year ago, I was hoping to gauge more about his personal appeal, as one of the few, almost pioneering stage poets in Malaysia. But as it turned out, Jamal had much more perspective to share for the benefit of anyone else keen to carve their own path in slam.

This is the main reason I’ve revived his interview response from my dusty inbox. I believe it will serve as a timely counsel for the participants in the upcoming CEX Slam 2017, happening in Ipoh this Saturday.

Whether you’re Malaysian or Singaporean, the scales might just tip in your favour if you heed some advice from an experienced winner of slams in Kuala Lumpur. 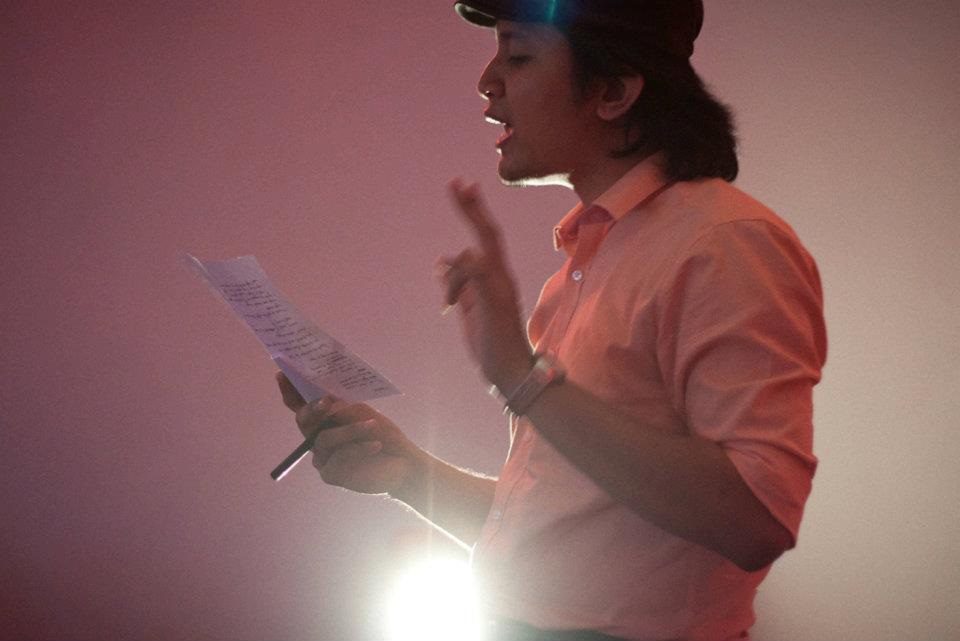 Would a slam by any other name, still smell as sweet?

A thing that stood out from the beginning was Jamal’s awesome quotes.

I am spoken word poet. That means I write for the stage, not the page. I believe that the word is alive, and it needs to be spoken,” says Jamal.

His bold declarations leaped out at me from the screen and gave me electric feels. It seemed surreal and yet too real the way he described the moments of performing a slam, down to the part of being an audience member in a slam.

He also breaks down the differences between spoken and written poetry in a meticulous, exacting fashion.

“The page is a personal space. To me, consuming page poetry is an intimate and private experience. The sharing of this is not mandatory; the reader decides if he/she wants to share it with anyone else. There is very limited engagement between the poet and the reader. While this creates a connection with the reader, it does not necessarily validate the readers’ interpretation or experience. In the instances where the poet writes for himself/herself, the reader usually does not have the benefit of being addressed and engaged. The reading experience can also be uninteractive; the reader chooses how he/she wants to consume the poetry. This can result in an inconsistent poetic experience across different readers.

This entire interaction creates a safe space for conversations to happen; both the poet and the audience respects each other and returns the favour to each other – the audience listens, the poet shares.

This engagement is valuable and profound to both parties – the poet and the audience. Having an audience member coming up to you to compliment you after a show is a great feeling (I still don’t know how to deal with this gracefully), but striking a conversation with them is much more fulfilling. I’ve had countless conversations after performances where we don’t even talk about me or my poems, but rather some of the issues or subject matters I’ve touched upon in my poems. At this point, the poet and poem disappears and what you get is two people connecting with each other. The poet and the poem fulfill their role to raise issues, and the connection progresses – into a meaningful conversation and a bond between two people. This is a beautiful thing.”

Being a Poet: Nurture or Nature?

When asked how he found his poet voice, Jamal assessed it in two parts; ‘the who’ and ‘the how.’

‘The Who’ encapsulates a poet’s identity, character and personality while the how is cadence or tone, which is a characteristic delivery that distinguishes a poet.

“The former is nature, the latter is nurture,” he said.

“A lot of the times when new writers are drawn to poetry and they start attending readings or performing, they mimic a certain way of delivering their lines (cadence) based on their observations and impressions, thinking that it’s poetic. It’s not necessarily wrong; they have to start somewhere. The issue is when they get stuck on it and keep on rehearsing on reading or performing their poems in the same style. Many people dislike this because it seems as if the poets are trying to sound like poets rather than just be themselves and write about it. I’ve been accused of this myself.”

As a Malay fluent in English and also Mandarin, Jamal relates that he had initially struggled to learn whether his delivery in English was as good as it was in his mother tongue. He considers it was one of his biggest hurdles. This coincided with his eventual realization to differentiate between writing and performing poetry.

“After discovering spoken word, I realized that I do have an English poetic voice – a spoken one, rather than a written one. This realization came when I noticed that I resonated immediately to the Def Poetry videos on Youtube. At the time I understood it as being street – slang, tone etc but over time I realized it was voice. The poet’s own voice. Watching Def Poetry made me realize that I could go bilingual – mix Bahasa Melayu and English together to articulate or express something. That resonated with me deeply – I had found a way to my voice.”

On the stuff that keeps him inspired, Jamal said it were mainly his past and present experiences, as well as new writers and writings.

We don’t talk to each other enough in this country, and that in a way inspires me too – there’s always something that needs to be said.”

Despite almost a decade in the performance poetry scene, Jamal sees more hurdles to overcome than he started with. These include grappling with personal definitions regarding what constitutes or who qualifies to be termed as an artist.

He feels his accent, which takes on a slight American tilt when he gets into Hip Hop rhymes to be a minor talking point. He also feels that he could improve his writing style to be less so obviously referenced, to the Def Poetry poets that were his muse.

“There is also the hurdle of crossing over or breaking into the Malay indie poetry scene from the current English contemporary/spoken word scene. This is especially relevant to me given that I’m Malay. Aside from these there are the usual things like writers’ block, overcoming poor writing habits and lacking motivation.”

Tips for up and coming slammers

#1 Write first, think later. Always write with your heart, and then read with your head. It ensures the emotion and spirit of your intention is captured in your writing; then you edit and craft it into something more refined and polished; structured.

#4 Believe in your poem. A poem that you believe in is stronger than a perfectly written poem; the audience or reader will feel its meaning. That’s why you must always write with your heart.

With that, I believe this article has captured valuable insights into slam for both the initiated and also uninitiated. If you’ve taken a shine on Jamal, you can keep tabs on his performance through soundcloud, jamalraslan.tumblr.com and @jamalraslan (Twitter, IG).

For the record, he does not look anything like Ada Apa Dengan Cinta’s Nicholas Saputra, although he is not bad looking lah. He is currently working on writing more fiction, getting published, collaborating with other artists and recording a second EP.

Are you also brimming with a talent and personality that must be shared? Talk to us at [email protected]