A month back when Ruby Subramaniam read an article about a Facebook group on a mission to spray paint “inappropriately” dressed women during Thaipusam, she felt she had to do something.

Being absolutely familiar with one of the world’s oldest religion, Hinduism, the self-taught artist reflected on the irony of men worshipping female deities and yet asserting their dominance in such disrespectful manner.

In Hinduism, the principal qualities of creation are represented by three deities – Trimurti as they’re called; Brahma the Creator, Vishnu the Preserver and Shiva the Destroyer. These three qualities have feminine aspects and are represented by their female counterparts; Saraswathi the Giver of Knowledge, Lakshmi the Conferrer of Wealth and Health and Shakti the Bestower of Power.

What was inspired as a “comeback” to the Thaipusam spraying-painting threats evolved into something much more personal and deeper. Ruby says her idea transcended the anger she had about the group with the entire project – a series of Facebook images – focusing on women reclaiming and embracing their inner goddesses.

With the project titled “This Body is Mine”, Ruby explains that her initiative is all about women’s voices, their bodies and the respect they deserve as a feminine aspect of the human species.

The project starts off with dancer, Harshini Devi Retna, posturing as Goddess Lakshmi, clad in a hot pink sari, that could easily be a symbol of feminism, or the colour of a lotus flower, as it is usually portrayed in Hindu deity paintings.

On her back, the piercing eye of an owl, is drawn as a totem of wisdom.

A snippet explanation by Ruby accompanies each photograph where she explains in detail why she chose her motifs and what she aims for it to represent.

I chose to paint an owl on the model, signifying patience striving to discover knowledge particularly when surrounded by darkness. As a bird reputedly blinded by daylight, the owl also serves as a symbolic reminder to refrain from blindness,” a description on Goddess Lakshmi reads.

Ruby adds that the root word lakṣ (लक्ष्) in Sanskrit, means “to understand your goal and aim accurately”.

On sharing her experience with Eksentrika, Harshini says many have a very misinformed view about the Hindu goddesses. In the context of Lakshmi, the 27-year-old argues that besides providing wealth and health, Lakshmi is also the symbol of joy.

“Wealth is happiness to many. So I think it’s very common for people to think that she provides wealth. Even in pictures, the palm of her hand pours money. To me money isn’t everything. Money comes, money goes.

“When I see Lakshmi, I don’t just see money, I see her grace, her beauty, her calmness as she is married to Vishnu, the God who preserves earth and is calm like water. She represents a pink lotus that sits above muddy lakes.. that is why she’s rare and unique.”

The series include a haunting depiction of Kali as well. Kali, unlike the other Hindu goddesses, is famously known for her unorthodox, taboo breaking depictions. However,  beneath her angry demeanour lies immense amount of motherly affection and care.

When Ruby first approached Nalina Nair to don the role of Kali, the dancer was a little hesitant.

“I was of the opinion that Rathimalar Govindarajoo’s dance style and technique represented Kali. However, those weren’t Ruby’s criteria for the goddess and she said that she saw the personality that I carry as Kali,” the 27-year-old political activist says.

Years of practise as a dancer led Nalina to ease in to her role. This article also helped her embrace her inner Kali. With tiger and skull motifs along with smoke to represent Fear and Rage, Nalina portrays a mortal goddess.

“I also made sure that there was Kali’s famous image of holding the sword of knowledge and a severed head representing the ego. This, to me, is a symbol of the egos of patriarchy that feminist activists battle against,” Nalina shares.

Nalina feels that every woman is born with the inherent Kali energy. It is an important and integral energy to exude as it crushes patriarchy.

“Whoever you may be, like Kali, you should take charge of your life and own it. Be unapologetic, put yourself as a priority and celebrate your femininity in whichever way you choose to do so. Do not let patriarchy set rules for you and don’t let it tell you what roles you should or should not take up.”

That said, Nalina says the struggle for women’s equality involves inspiring one another – this includes men too.

Women need to stand side by side with our male counterparts in nation building. Then and only then will we see more wholesome policies and laws. And by wholesome, I mean not only just and fair policies and laws for women, but also children, migrants, refugees and human rights.“

In the image description, Ruby wonders if Kali actually walked down the streets during Thaipusam, would people dare to intimidate her in such manner (in this case, spray painting).

“Kali is wild, untamable and she terrifies some, particularly those who are threatened by strong, independent, fierce feminine energy. This goddess does not bow down to societal demands and expectations, she has her own moral code and ethical standards and she asks us to let go of any preconceived notions,” Ruby explains. 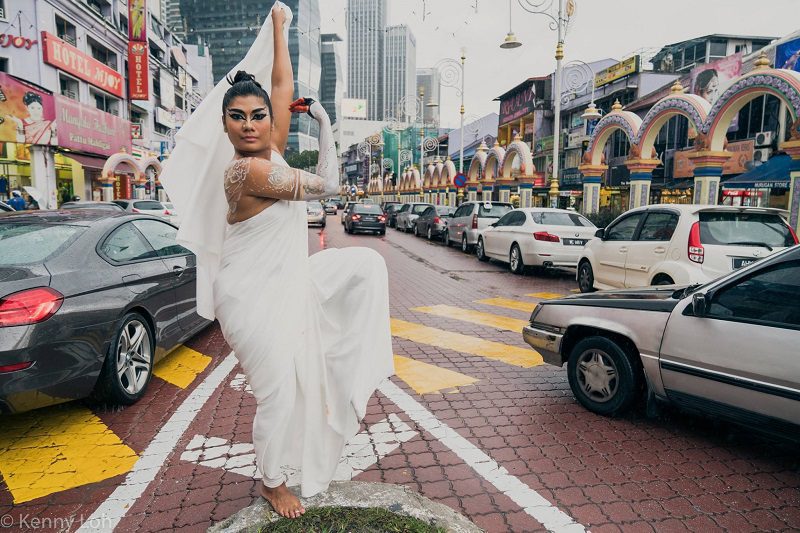 The most recently released photograph in the series depicts dancer Rathimalar Govindarajoo as the Goddess of Knowledge, Saraswathi decorated with a swan, or hamsa, to denote spirituality and grace.

If traffic came to a standstill in Brickfield’s Little India, this time, it was for a very good reason.

Rathimalar strikes a majestic pose balancing on one leg, preening as a goddess would, right on top of a road divider on the famous Indian street. This wouldn’t have been made possible without the wonderful work of Roovaa Lijuan, who designed the saree and did the make up for Rathi.

Rathi’s chance meeting with Ruby a couple of months ago opened doors for both artists to collaborate. Rathi, who a few months back performed Odissi with then seven-month pregnant January Low to a sell out crowd, says she shares so many similarities with Ruby.

Recognised as the Pioneer Dancer of Sutra Dance Theatre and the Principle Dancer of Shobana Jeyasingh Dance in the United Kingdom, Rathi, Ruby feels, is the best person to embody the spirit of Saraswathi due to the dancer’s immense experience. 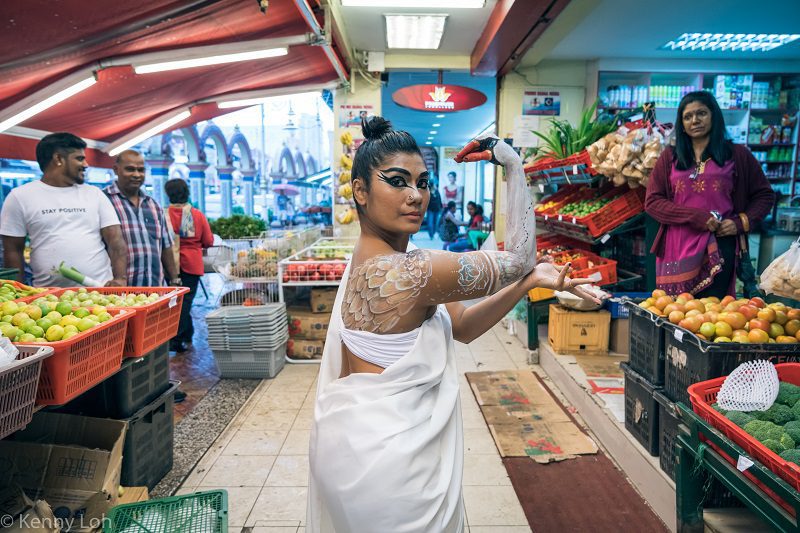 Rathi says she was glad that the issue is being addressed from an artistic perspective.

Ruby says the motive of this art project is hopefully to bring awareness for women to see pass societal expectations and have ambition for themselves.

“The world will say look like this, be like this, say this, become this. It’s time we stopped teaching younger women to succumb to demands of everyone else and learn that it is strength to be your own kind of woman. Have courage to pursue your deepest desires,” Ruby urges in one of her post.

The artist, who last year had organised Malaysia’s first Art Battle is set to release more inspiring photographs on a daily basis up until Thaipusam on January 9.

Check out the amazing #Thisbodyismine on Ruby’s Facebook page. Have an art project you would love to share with us? Send ’em over to [email protected]