Get ready your battle cry and paints! It’s time for Art Battle #2

Art Battle Malaysia is back and hungry for more artists to duel it out on the public easel!

Think you can withstand the pressure?

Prove your paint and marvel the crowd in no less than 30 minutes!

This spectator sport puts the power in the audience to give the ultimate thumbs up or thumbs down.

It was brought to Malaysia for the first time just last year, by Ruby Subramaniam, who had been so thrilled from joining Art Battle Brasil she just had to start one here. Check out the story on the first ever event here.

And now she’s at it again for Art Battle #2, which will be held at Inti Subang this weekend.

What’s more, it will be held for two days this time and together with a string of other art opportunities that makes it a mini-fest galore!

Come for Art Battle this time, not just to watch some incredibly talented artists battle it out but to get to know other artists and people who are interested in the local art scene,” says Ruby.

Basically, if you’re the kind who loves art but not up for the intense spotlight of art battle, you can join up with Doodle Malaysia for a totally Lepak Doodle session. There’s also Urban Sketching by KL Sketch Nation, who have basically painted the town in not only red, but a whole other level of hues and shades.

Those of you interested to pick up some technique or share some mad skills, this is the place for you this weekend lah. 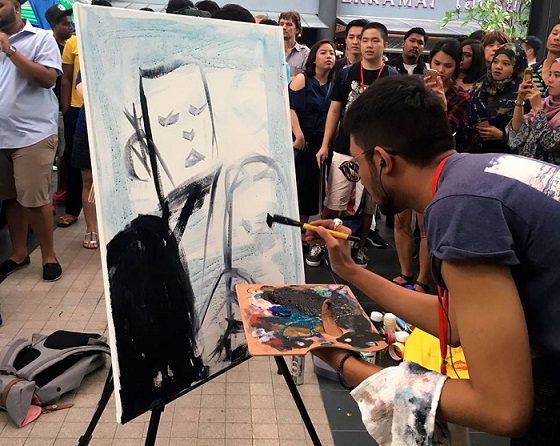 For you Comic crazies, Garaj Komik, will also be there. Go say hello to get inspired with this gang of comic creators from different backgrounds, who were united their love of comic creation.

Some of the amazing artists from Art Battle #1 will also be there to sell some of their creative merchandise such as
Nabura Arts  and Juan Villanueva. Mohd Rizal of  The Art of Rizal Paperbag Head will also be selling his original doodle works.

You could also get some tips from sifu, Stan Lee, on the Basics of Drawing People at his booth!

This year’s Art Battle sponsors are Inti Subang and Umadx, which is a reward-based crowdfunding platform to help bring dream projects to life. They offer creative individuals the opportunity to raise funds via its Asian based platform with a global community of backers.

If you still need convincing, check out the video from last year’s first ever, Art Battle Malaysia to get a feel.

Check out Art Battle Malaysia on Facebook   for more details and contact them directly to participate, there’s at least two spots left at the time of writing this post.

Have you got a crazy creative art fest to highlight? Share with us at [email protected]