“I was paralysed waist down when I re-discovered music,” Endee Ahmad

Endee Ahmad never knew music was to become his destiny until an ill-fated fall in the bathroom led him to be paralysed from the waist down in 2013.

“I was working as a banker for seven-years then,” the 35-year-old reveals to me when met at The Kuala Lumpur Performing Arts Centre (klpac) recently.

He fell and regained consciousness a day and a half later only to discover that he had lost his job, his wife and his ability to walk.

“My wife and friends left me. My boss called me and said he was unable to employ me due to my condition.

“I could not feel my legs and did not know if I was full or hungry. I could not tell if I was to take a piss or a shit.

“I couldn’t even feel my dick!” Endee quips, adding that period in his life was the darkest and yet the most profound.

“It was then I got acquainted to the legendary Nusrat Fateh Ali Khan. I could not understand a word he was singing but his music was spiritual.”

His favourite piece was and still is, Sajna Tere Bina (my beloved, without you).

“I kept playing it on repeat. There was just something about his voice, the way he sang the song that just made me know that I’m okay.”

The doctors had given up hope on Endee with many saying that he would be paralysed for life.

“I didn’t believe them. Secretly I had this hope that there is a possibility I will recover.”

His friends brought several ustaz (Muslim priest) to conduct prayers for Endee with some even getting him a doctor from Sudan.

“Nothing worked until one day, this friend came all the way from Johore Bahru bringing with him air zam zam (holy water) and three biji kurma (dates).”

His friend told him to try it as it was specially prayed for him.

“Give it a go, my friend said. I was sceptical but I tried anyway. I had nothing to lose because I had already lost everything.”

That night, after drinking the holy water and eating the fruits, Endee laid on his bed and stared at the white blank ceiling of his ward and began pouring his heart out.

Endee’s concept of god is not of someone with a magnifying glass looking at humans from the sky. “I think we’re all part of god. Minuscule tiny parts of that bigger, larger energy.”

So that night I cried, “God, if you give me back my feet, any challenge you throw at me, I promise you I’ll be able to accomplish it.“

The next morning, the nurses came around with a wheelchair to assist him for his scheduled bath.

“Usually they will carry me and put me onto the wheelchair. But that morning, I arose from the bed like a normal person.”

Endee kept his promise and has continued belting out his songs right from the heart.

“Sometimes when I sing, I am transported to that moment. So now, I’m just serving as a conduit of this divine power through music.”

Endee continued back working but on a contract basis. During his free time, he began training his guitar playing.

“I worked for a year for different companies to save money and during weekends I busked,” he says, adding that his first busking experience at Bukit Bintang provided him RM15 in total.

“Busking is hard. The heat, the rain and at times the lack of money you make can make any musician feel down.”

After changing his strategy by experimenting with different songs and performing at different locations around Kuala Lumpur did not work, Endee decided to head to Kuching, Sarawak.

“There, I could earn about RM80 to RM200 per-day. Kuching was also where I trained myself up in terms of stamina and endurance.”

In 2015, Endee returned to Kuala Lumpur and performed at Merdekarya. Through the assistance of Brian Gomez, Endee was hooked up with Publika to perform for one of their open mic slots.

It was there Air Asia’s Tony Fernandes chanced upon him during one of his sets and requested him to play on a flight back to his hometown, Miri.

“Everything was provided. I just had to bring my guitar and my friends to entertain everyone on the flight. It was a dream come true!”

“Clearly, the sky is no longer the limit for us. Now we have to play on the moon!” Endee quips.

It was thanks to this experience that got Endee in touch with more and more local musicians. 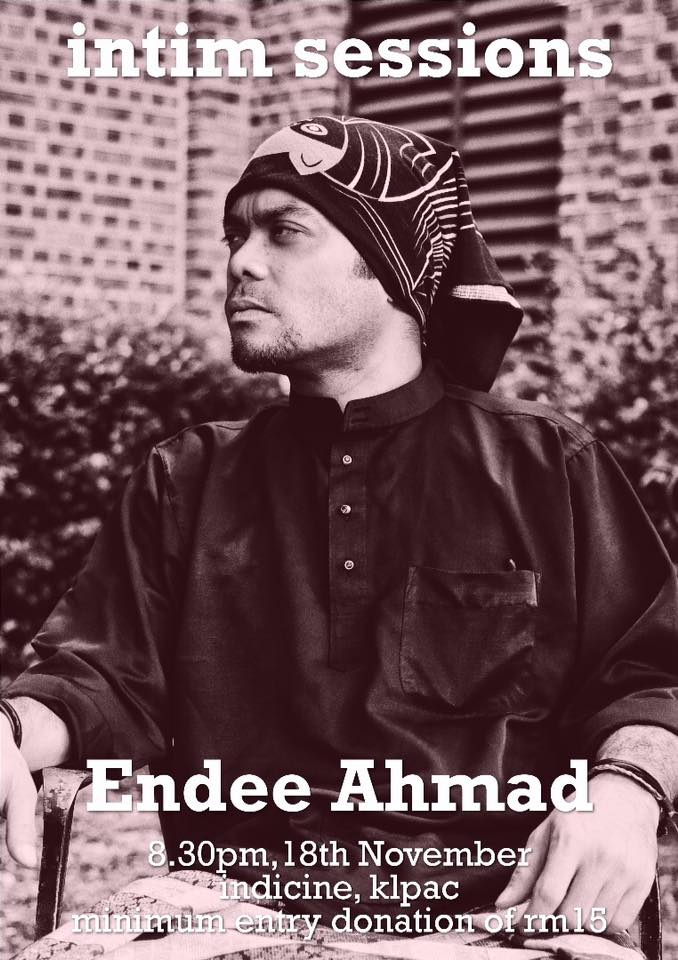 Now he earns his living as a full time musician. He also collaborates with Otam and is the man behind Feel Tu Penting – a music collective who jam and perform spontaneously at random spaces.

Endee Ahmad is set to perform at The Kuala Lumpur Performing Arts Centre‘s intim sessions #5 this  Saturday, November 18 at 8.30pm. Entry is a minimum donation of RM15.