Terence Toh’s ten-minute musicals have also been performed at the Short and Sweet Musical festival, where he won Best Libretto in 2012, 2015 and 2016. Terence has also contributed to shows like Big Nose Productions’ ‘Tales from The Bedroom’ and ‘Tales from the Jamban’, and the Actor’s Studio’s ‘Indicinelive V’. His play ‘Restless’ was featured in the Actor’s Studio’s New Play Project 2018 and his musical ‘Euphrasia: Three Musical’, co-written by Cheah Uihua and presented by the Actors Studio and the Good Shepherd Sisters, was shown in Kuala Lumpur, Ipoh and Kota Kinabalu. He won a Boh Cameronian Award for Best Book for his work on 2019’s The Working Dead. ‘You, Me and the Big C’: An Honest Play About A Real-Life Cancer Battle 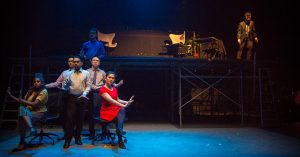