Have you been itching to doodle in the LRT Masjid Jamek tunnel after seeing the amazing works by Sanuri Zulkefli and Superdoofus aka Arif Rafhan Othman?

Unfortunately, unless you’ve been commissioned as an artist to do that, your painstaking doodle efforts on the walls will have to be scrubbed away.

But But But WHY?

We know it drives you to tears but actually, as tempting as the available white space looks, combined with title “Contenglah” which can be construed as an invite but actually…it’s merely an expression. 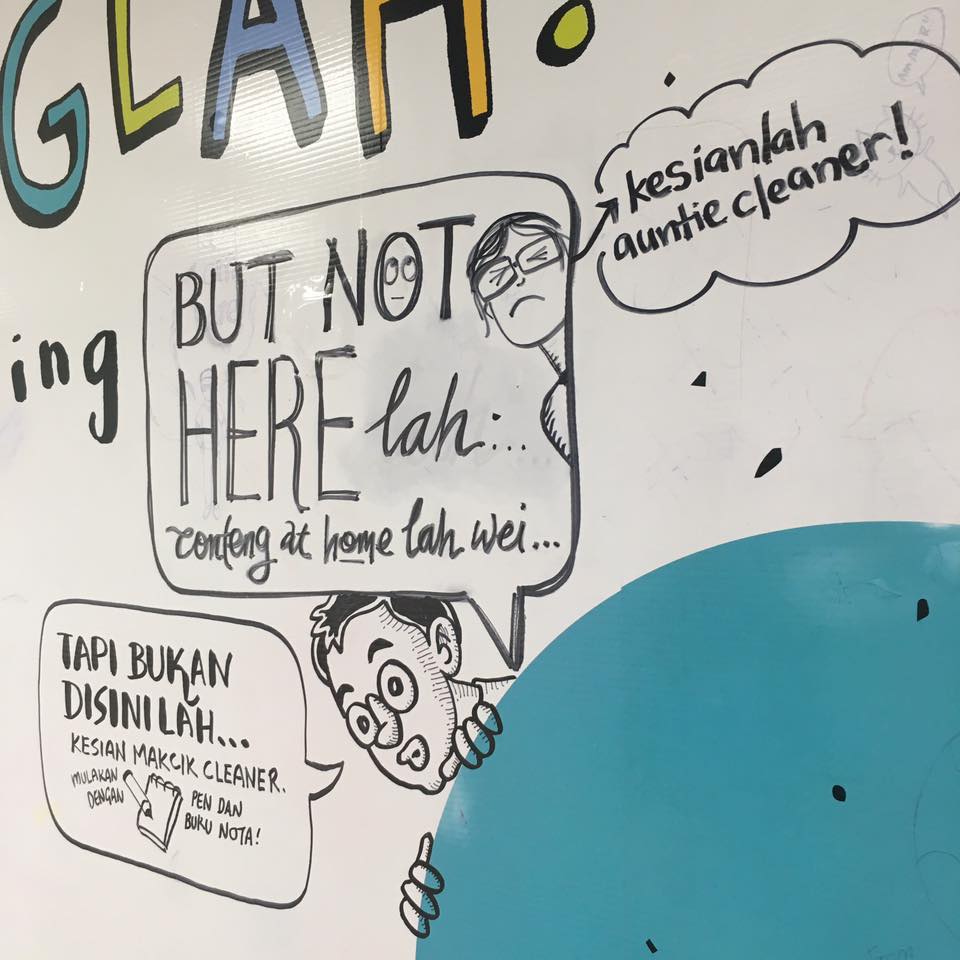 Contenglah organiser and member of Doodle Malaysia, Allie Hill clarifies that the theme and title, was formed with the intention to encourage people to find their inner artist, not as an invite or permission to add drawings.

“It’s a Malaysian English thing isn’t it? When I wrote ‘Everyone can Conteng!’ as the headline, if I read with mat salleh voice, it’s just that lah, everyone has the ability in them to conteng…but hor…when I read in Malaysian voice, it sounds like ‘silakan!,” Allie told Eksentrika

“Hand on heart, I want to apologise to all those well meaning people whom I misled with this very ambiguous headline,” says Allie.

She explained that while she would have loved to dedicate a space for people to express themselves, the feasability of it came into question, given the current political climate, in which, cartoons are deemed rather scary or too dangerous.

“If you draw on the wall, it will be considered vandalism and we do not want to get any well meaning people in trouble with the Abang Polis at the station,” she says.

BUT, don’t droop that lower lip in disappointment just yet and hang on to your doodle pen, because…Eksentrika will take in your contengs if you take the trouble to send pictures of it to us.

The only condition is, you can draw on any surface, your notebook, your clothes, or even your skin but not on the LRT Masjid Jamek tunnel walls lah.

Eksentrika will compile your works and feature it all in a special post for Inktober.

Allie says, you can also uphold the Contenglah spirit, by posting your doodles to Doodle Malaysia on Facebook.

In the meantime, check out a video of Superdoofus’s victory dance after completing his masterpiece for Contenglah, which took four days and he was given a permit to do so!

You can check out more of Superdoofus works on his Facebook page and if you would like to be featured on Eksentrika, send us your doodles to [email protected]