In the preface for The Tudung Anthology, Azalia Zaharudin states that the book is a collection of personal reactions to the ‘never-ending questions and judgments, be it from Muslims or non-Muslims’ by ‘women from different walks of life’. Its aim is to provide a ‘bigger picture’ on the wearing of the tudung beyond choices of wearing it or not, and (perhaps as an attempt to steer accusations of challenging religious dictates away) it is emphasized to be ‘not a religious book’. Beyond this, the anthology has no set audience: the first sentence of the preface itself begins with ‘I don’t know the reason you chose to pick up this book’.

Having no set audience makes The Tudung Anthology very accessible, but it also falls short of the potential a work like this can have. The preface does not provide much sociological, historical or religious context on the relationship that Malaysian women have with the hijab (and similar religious attire) and how attitudes to it have evolved in Malaysia over the past few decades. I wish that it had been included, because it would have added some form of intellectual depth to the anthology that is otherwise missing.

Instead, the anthology seems to be focused on the sole goal of drawing empathy. In this it does quite well. There are 22 contributions in total from women of both Muslim and non-Muslim faiths, fulfilling its aims of providing a range of women from different personal backgrounds expressing their relationship and views of the tudung. The contributions comprise fiction and non-fiction (including a poem and a comic).

The advantageous diversity in this anthology is slightly undercut by the lack of identification between fictional or factual writing. The fictional and non-fiction prose contribution are not clearly identified as one or the other and most of the contributions are written in first person. Although I believe that fiction is a powerful tool, discussing something that involves the conflation of personal and political areas of life — as a woman’s choice of religious attire – the voice of the autobiographical essay should be prioritized. Instead, the works blend into one another, perhaps strengthening the fictional works but diluting the personal essays.

The anthology offers an interesting range of perspectives on the tudung. Contributions from Muslim women (or at least by those with Muslim-sounding names) seem to mostly explore the issues of personal agency, whereas contributions from non-Muslim women seem to be concerned with the tudung as a form of systemic oppression. Examples of the former include ‘That Thing on Our Head’ by Erna Sharida, ‘The Voyage’ by Nurul Najwa Solehah. ‘Much Ado About Tudung’ by Hezreen Abdul Rashid tells of a woman’s progress to don the tudung, and while ‘Belum Muslim’ by Alina Burner is not explicitly about head coverings it also tells of the process of conversion and the way it influences social relationships. These works show a different relationship with the tudung compared to ‘The Light and Dark Side’ by Leela Chakrabarty and ‘Puppeteers’ by Anusha VR, both of which are concerned with the wider questions of systemic patriarchy and misogyny that the tudung brings with it.

Writing about an ‘other’ – people whose identities are different from ours – is always a challenge, and this difficulty is reflected in a few other works in the anthology as well. ‘Nadia’ by Amanda Lim is an interesting, but somewhat disjointed work: it tells the story of a writer attempting to write about a tudung-wearing woman. The premise is interesting, but I couldn’t help feeling that it lacked daring and direction. The idea of the wearer perceived by another party is used in the poem ‘Polka-Dotted Heaven’ by Angelina Bong. Although the latter is a simpler work, I found it slightly more successful at presenting the dichotomy between the wearer and the perceiver.

There are also a few works that deal with the rejection of the tudung or conventional forms of religion, such as ‘Fabricated’ by Masami Mustaza (the only author to have two works in this anthology), ‘Unveiled’ by Raja Ummi Nadrah and ‘Meaning’ by an anonymous contributor. ‘An Epiphany in Reverse’ by Adibah Abdullah is also an interesting work – an experiment to wear the niqab in Kuala Lumpur allowed her to conclude that religious garb in itself is nothing special; suggesting that it is religious conviction that gives the cloth its powerful significance, not the cloth in itself. 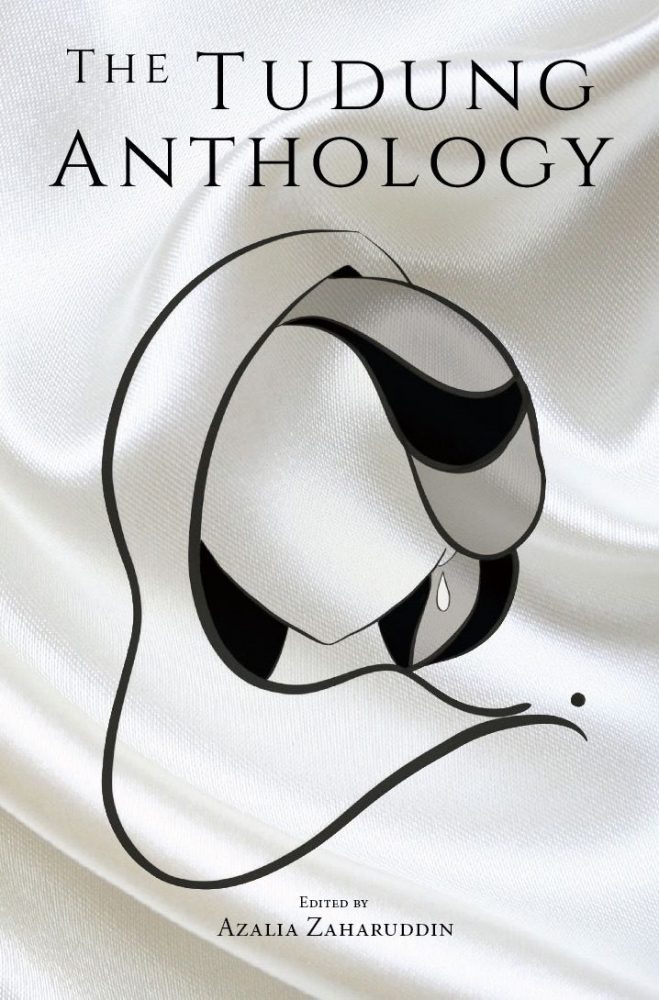 There appears to be interest in telling Malaysian stories through a speculative lens. Aina Izzah’s ‘The Divide’ is an interesting work of speculative fiction that imagines tudung wearers and non-tudung wearers divided geographically and reside in two separate locations of Kuala Lumpur, Steff Fleur’s ‘Rambut Medusa’ is a funny magical realist story that takes verbal hyperbole about men to extremes, though I think the most memorable work to be Masami Mustaza’s ‘The Hijabilantes’, a story of crime-fighting hijab-wearing superheroines.

I found two works personally striking – Mimi Salleh’s ‘A Blush of Womanhood’ contextualizes the wearing of the tudung to the defining of a woman’s identity in Malay-Muslim culture, whereas ‘Tattoos and Tudung’ by Shaf Ghani presents the visual juxtaposition of a woman who wears the tudung and has a tattoo with the word ‘freedom’ on her body – inevitably transforming the woman’s body into a canvas of contrasting social semiotics.

The usage of the word ‘tudung’ in the title is noteworthy. In recent years, the Muslim woman’s headdress has received an identifiable name in English – hijab – that it loaned from Arabic. Opting to use the Malay word, tudung, creates a bilingual title that not only makes perfect sense to Malaysian ears, but allows for a wider interpretation of the word. Unlike the more specific ‘hijab’, the ‘tudung’ can literally be translated as ‘covering’, and in this anthology all varieties of religious coverings – the hijab, the abaya, and even the niqab – become a point of discussion.

The Tudung Anthology is not without some wrinkles, but the strength of the stories in it irons them out. It is is not a solid anthropological study of the issue by far, but one can say that anthropology and sociology made accessible. It is a valuable book worth getting, and may change and challenge your own questions and judgments about Muslim women and their relationship with the tudung.

The Tudung Anthology is now available at all major bookstores nationwide. Read a local book recently? Drop us a comment or send us an email at [email protected] to share your thoughts with us!