This review comes very late; almost a year since I first got hold of the book by courtesy of Rumah Lipur Lara.

The delay however, is through no fault of the book, only this reviewer, who lives a nomadic life and has the unfortunate bad habit of leaving things in the multiple abodes she flits to and from and sometimes forgets where some valuables have been stores.

Luckily, I recently was able to uncover this precious title “Sekolah Bernama Kehidupan” (School named Life) by Asmar Shah, and upon finished reading, became resolved to write-up this owed review.

It’s easy to fall in love with Asmar Shah’s simple yet potent flair of the Malay language but the true charm lies in the story itself, which reads like a true-to-life biography from the perspective of innocence.

At the last page, I had to calm my emotions to assure myself that the story is only fiction; that my internet search for the characters would not turn up real life personalities. Honestly, this feeling took me by surprise, because I hardly get affected this way by books. The only two books that affected me in a similar way was Angela’s Ashes by Irish-American author, Frank McCourt and Yann Martell’s Life of Pi.

Is Asmar’s storytelling prowess on par with the aforementioned internationally famed authors? I cannot proclaim that but Asmar definitely deserves props for crafting a story that effuses such candor. 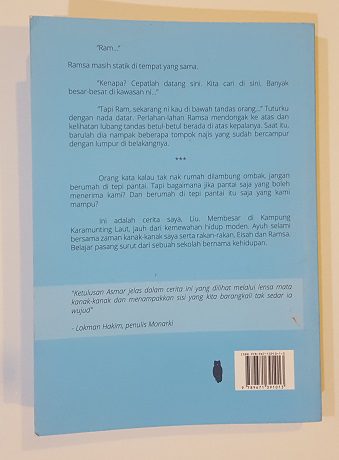 I believe an element that contributed to this was the patois in the dialogues that convincingly evoked a speech style recognised as of East Malaysian origin. As someone from West Malaysia, I cannot claim any Bajau roots to ascertain the accuracy of Bajau-dialect used in the book but as someone with several Sabahan good friends, I’d say, it did not come off sounding off the mark.

The other thing that lends realism to the plot is the depiction of genuine issues, such as stateless-ness, poverty and lack of schooling access, which are known and existing factors affecting some ethnic communities in Malaysia.

Asmar’s main character, a boy named Liu, tells the story with candid familiarity, letting traces of his brave yet tender personality shine through. His anecdotes have a heart-melting quality and conjures recollections of childhood friendships that one is bound to have had while growing up in Malaysia.

Personally, I recommend this book for reading at all high schools in the country. It peels away the blinkers of youth yet is being told from the perspective of a growing child. Liu is very much aware of his autonomy yet also understands that he is not completely equipped. He frames the conditions affecting him and children like him without political prejudice, or that kind of jaded outlook many Malaysians adults tend to have.

All this is rather refreshing and illuminating of politically sensitive themes at the same time.

Heck, I’d say go get this book now, if you can read and understand Malay but hardly read Malay authors. It’s a fitting example of what gems there are in the local writing scene and perhaps a perfect introduction to what modern Malay writers have to offer.

Got a book you want us to review? Email us about it at [email protected]