What is it like painting in the rain? Eksentrika sits down with Indian artist, Ajesh Suresh, to make sense of the 35-year-old’s site specific artworks.

The first thing that Ajesh says to me when I arrive at his apartment in Ampang is, “Would you like beers and some pizzas?”

An hour later, while munching on some breadsticks and chicken wings, Ajesh offers me a glimpse into his eccentric mind through a series of art expeditions across the Southeast Asian region.

In February this year, Ajesh journeyed all the way to Pekanbaru in Riau, Central Sumatra, the Indonesian heartland of haze and rampant forest fires to simply walk barefoot, shirtless amid the man-made destruction of nature.

“I wanted to experience everything, from thorny twigs to the dampness of the mud. I desired to feel mother nature silently speaking to me,” the art teacher from a local international school explains.

His colleagues and friends found it bewildering to see a man journeying 1,900KM to a location that is not at all favourable to tourists. That too, to record himself walking amid the trail of destruction caused by men.

In the pursuit, Ajesh observed that nature, despite the desolation, fought back by adamantly re-creating itself.

Site specific art, Ajesh explains, is an expression in which the artist incorporates elements of the environment to deliver a performance, to create a narrative.

The Kerala-born from Trivandrum believes that nature is eternal, acquiescent and yet indestructible. Thus, the subject matter for his site specific art.

Through the course of this project, he learnt that in being human, man is nature too.

“Man, being just another element; over a period of natural selection, is dominating the space. Generations after generations nourished and destroyed her. Communities gave birth to societies, and then it grew further into the woods and lakes, without an end!”

“My art is not at all political or activism related. It explores the relationship between man and nature – the known and unknown,” he adds.

This site specific art was named “Self Portrait”.

While witnessing the extent of destruction that was caused by humans to nature in Indonesia, Ajesh experienced nature taking on the role of the “destroyer” when he journeyed to Borneo – a location known for its heavy rainfall and flooding – in March this year.

His goal was to paint while it rained and to study if the struggle of creation and the ease of destruction was a natural process.

“Painting In The Rain” draws the irony of man – in this context, the artist – being placed in the position of a creator while nature, in the form of rain, attempts to “destroy” his creation.

It’s a conflict between brush strokes and the elements!” Ajesh exclaims while helping himself with a piece of pizza.

The first two days, Ajesh said, there was not a single drop of rain. The third day it only drizzled, but Ajesh was adamant to manifest his intent.

I was disappointed but then I thought, waves of the sea have a similar effect as the rain. And I have always wondered what it is like to go against mother nature and lose for once.”

Early this month during a trip to Pangkor Island, it rained heavily. Seizing the opportunity, Ajesh whipped out his paint brushes and watercolors to immediately set to work by the beach.

His site specific artwork also studies the extent of climate change on humans.

In October, his third site specific artwork in Southeast Asia took him to Vietnam’s Red River, which was drying up.

To symbolise the plight of the local fishermen there, Ajesh wrapped an old dilapidated boat, in bales of crimson cloth, symbolic of Vietnam’s red flag and the river’s namesake. 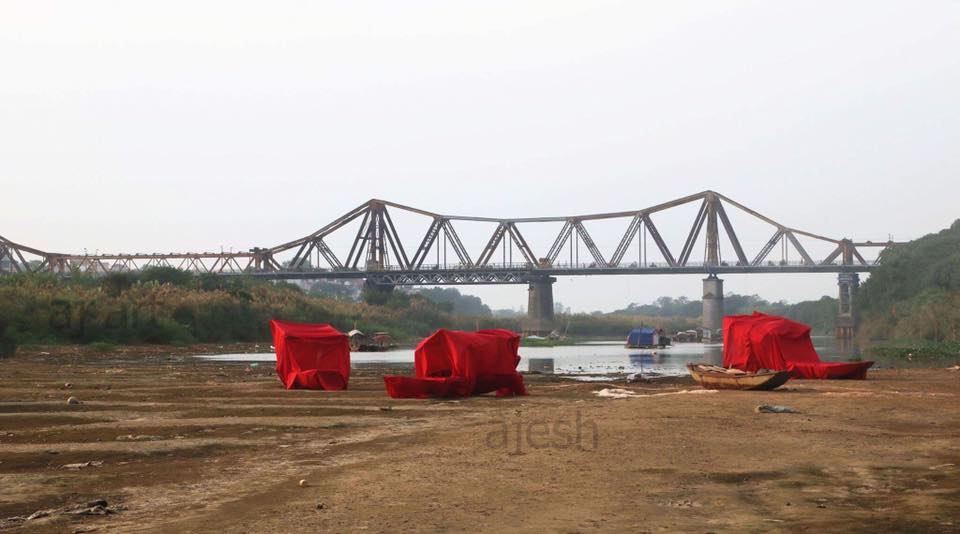 Ajesh is much thankful to locals and chance friends for assisting him in his quest to convey his artistic scheme.

He says his efforts would not have materialised, if not for them.

“In Riau, Indonesia, I was lucky to bump into photographer, Angie Leung by serendipity. She gladly assisted me to take photographs and videos.

“In Borneo and Pangkor, I had friends assisting to document the process and I will never forget the Vietnamese fishermen too, who obligingly helped me to source a boat and navigate to the river.”

Next year marks Ajesh’s consequent attempt in his live, site specific art installation. He plans to head to Singapore, where he will don a pair of Virtual Reality glasses to paint on an LCD television screen…yes, you read it right. He will paint on the TV. The exhibition is Ajesh’s take on raising awareness for the visually impaired.

“While I paint on the television set broadcasting a nature programme, the VR set will gradually simulate the effects of me going blind.”

He enthuses that he had always wondered what it feels like painting blind.

For other aspiring artists, Ajesh’s advice is to remember an important preparatory aspect; research.

It was a key lesson he learnt the hard way during his pre-graduation days at Birmingham City University.

“I had wanted to create an engaging site specific artwork in the university compound. I desired to form the shape of a heart by getting visitors to place pebbles and rocks.”

But his failure to research resulted in a poor crowd to his exhibit.

“It didn’t cross my mind that it was winter season.”

He never made the same mistake again.

“Research is extremely crucial. These days I research everything from the location and its people and yes, even the weather.”

As for what keeps him going, Ajesh’s reply was curt and swift.

He hopes to travel to three more locations to complete his art expedition.