What’s so great for a school to stage plays for 81-years?

It is indeed remarkable for a school to sustain staging annual school plays to the point it becomes more than a decade-long tradition.

Ipoh Anglo Chinese School (ACS) has since earned a name for this, having continued staging a play since the 1950’s and even churning out some famous names the likes of veteran actor, Mano Maniam and Chin San Sooi, the theatre director renowned for staging Macbeth in the style of Chinese opera.

Both Mano and San Sooi have openly spoken of their fond memories play acting at their alma mater circa the 1960’s. 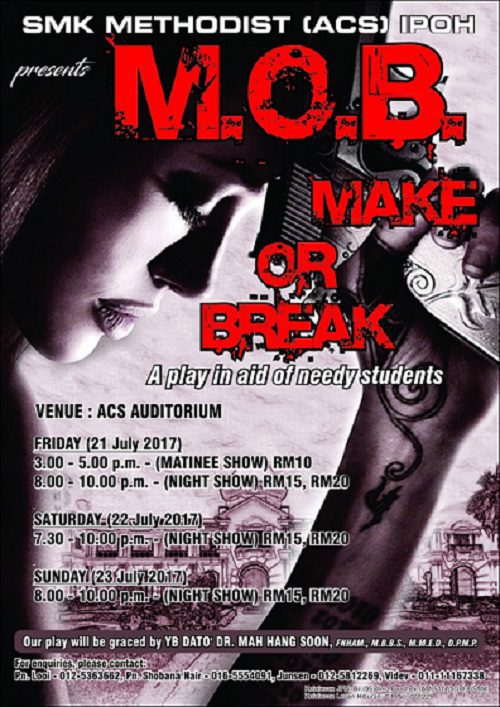 This year marks the school’s 81st production, featuring “Make or Break” a dark comedy tale of crime lords, assassins and siphoning of illegal funds – a reflection of current events perhaps?

The story was conceived by the school students themselves and written with the assistance of local actor and ACS old boy, Xavier Fong.

Xavier, who appeared in Adiwiraku – released earlier this year – has been coaching the school’s music and drama society (Madsoc) since 2014.

The cast and crew comprising 15 to 19 year-olds, will be putting on a three day show starting July 21 .

The first day will be a matinee and evening show, continuing with evening shows on Saturday and Sunday. Check out their Facebook page for details.

Tickets are RM10 for the matinee and between RM15 and RM20 for the other timings.

You can also get VIP tickets by donating RM50 and above, with your name acknowledged in the programme book.

All proceeds will go into the school’s food assistance programme, which provides RM3 coupons to needy students during recess.

We highly recommend you catch the school play, who knows, you might be watching a star in the making!

Have you got an awesome arts initiative to shout about? Let us publicise it for you, send us the details at [email protected]