“My favourite moment when I dress as a Lolita is when people call me a princess or a real-life doll.”

Wait, what is Lolita culture?

Lolita is a fashion subculture that originated in Japan during the early 1990s. It is based on the Victorian and Edwardian clothing with rococo influence, possibly branching off from Natural Kei (A Romantic Victorian inspired design in late 1960’s), and developed into an even more girly style adopted by younger audiences. 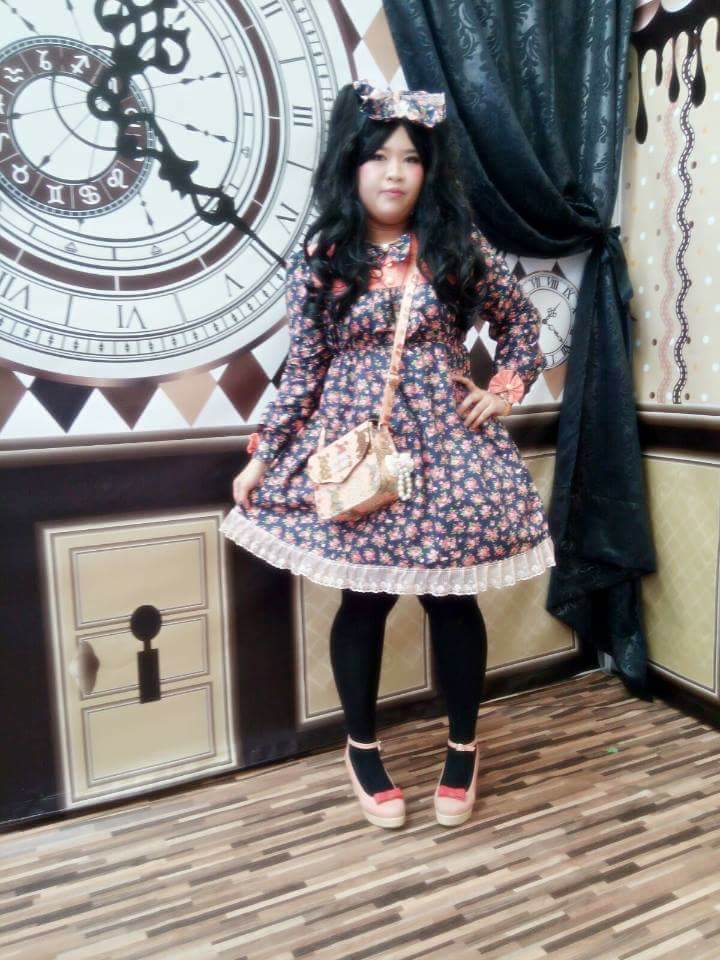 It also started to become influenced by other girly and youthful fashions such as otome (meaning maiden – a style heavily influenced by 1960’s mod fashion and femininity) and even other pop culture phenomenon such as idols, manga, model, and musician’s stage wear.

“For me, Lolita fashion is about representing ourselves in our own fancy favourite fashion while following Lolita dress coord (coordinate).” Azierah says.

The dress coord is like a dress code. The combination of various aspects such as the individual clothing – skirts, blouses, stockings etc, and accessories, like hair bows, to achieve certain sub-styles, such as gothic, sweet, or classic.

Azierah further elaborated that “Rococo” is an exuberantly 18th century European style which was the final expression of the Baroque (highly ornate and often extravagant style) movement. 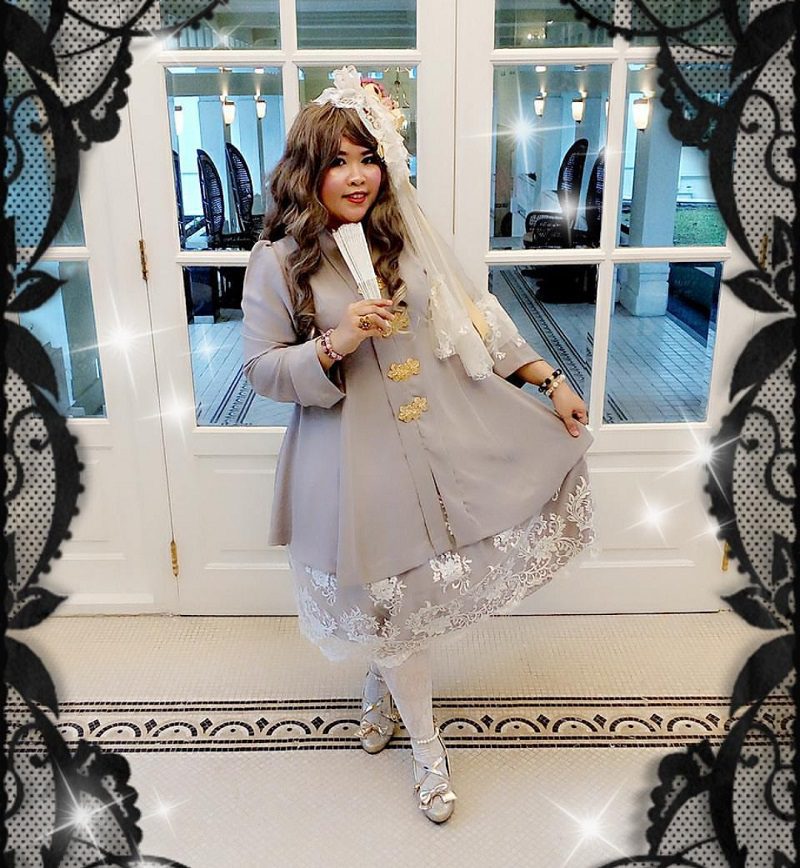 It was defined by seemingly contrasting aspect of extravagance and a quest for simplicity, light colours with heavy materials by the aristocrats and the bourgeoisie (conventional attitudes). This movement largely ended with the French Revolution, but the ideas and main aspects strongly affected Lolita fashion now.

“I was interested in Lolita fashion since high school. I learnt about it from gempakstarz magazine, as there was no internet in my house at that time.”

Like everyone else during their high school emo phrase, Azierah says she favoured gothic as her main style. 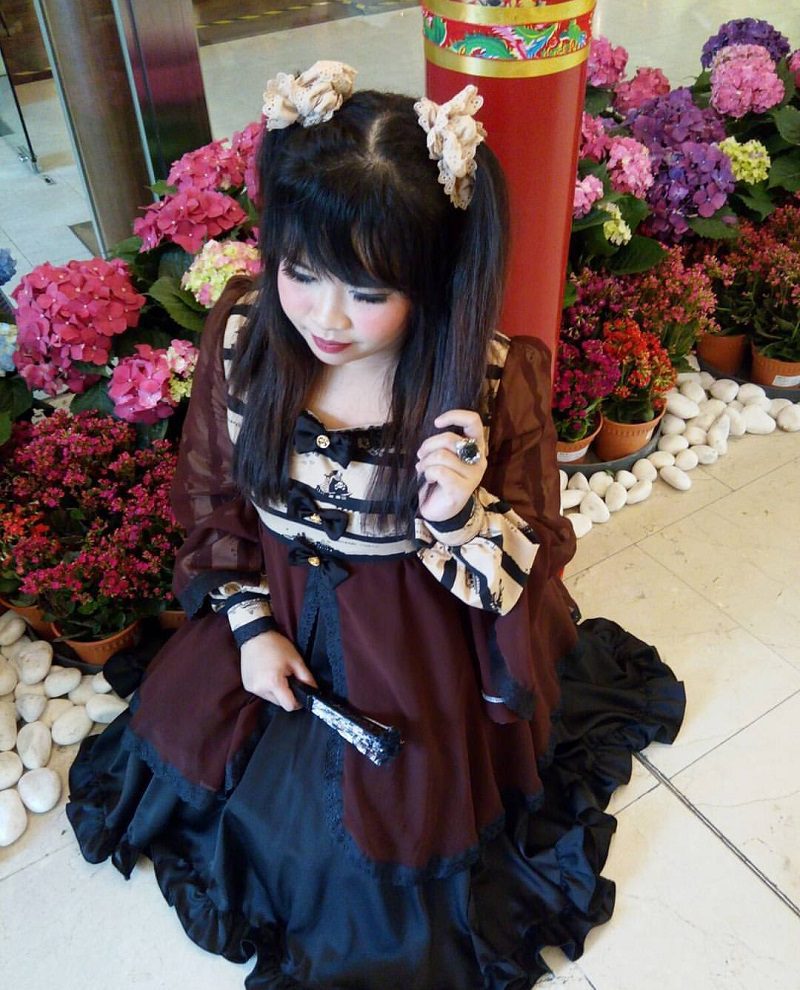 “But I never thought that I will wear Lolita dress. Back then, I just like to create drawings of Gothic Lolita, based on my favourite movie Corpse Bride, or any Tim Burton movies.”

After SPM, she had slowly forgotten about Lolita, due to her busy schedule at work and college.

“I was working in Muar when the stress from being bullied by office co-workers and relationship problems had gotten too much for me, so I decided to come back and find work in Selangor or Kuala Lumpur. That was in 2014. In 2015, I feel like wanting to do something that I really like, so I tried to search a Lolita club on Facebook. I found the Malaysia Lolita Club (MLC) , and so I joined the club.” 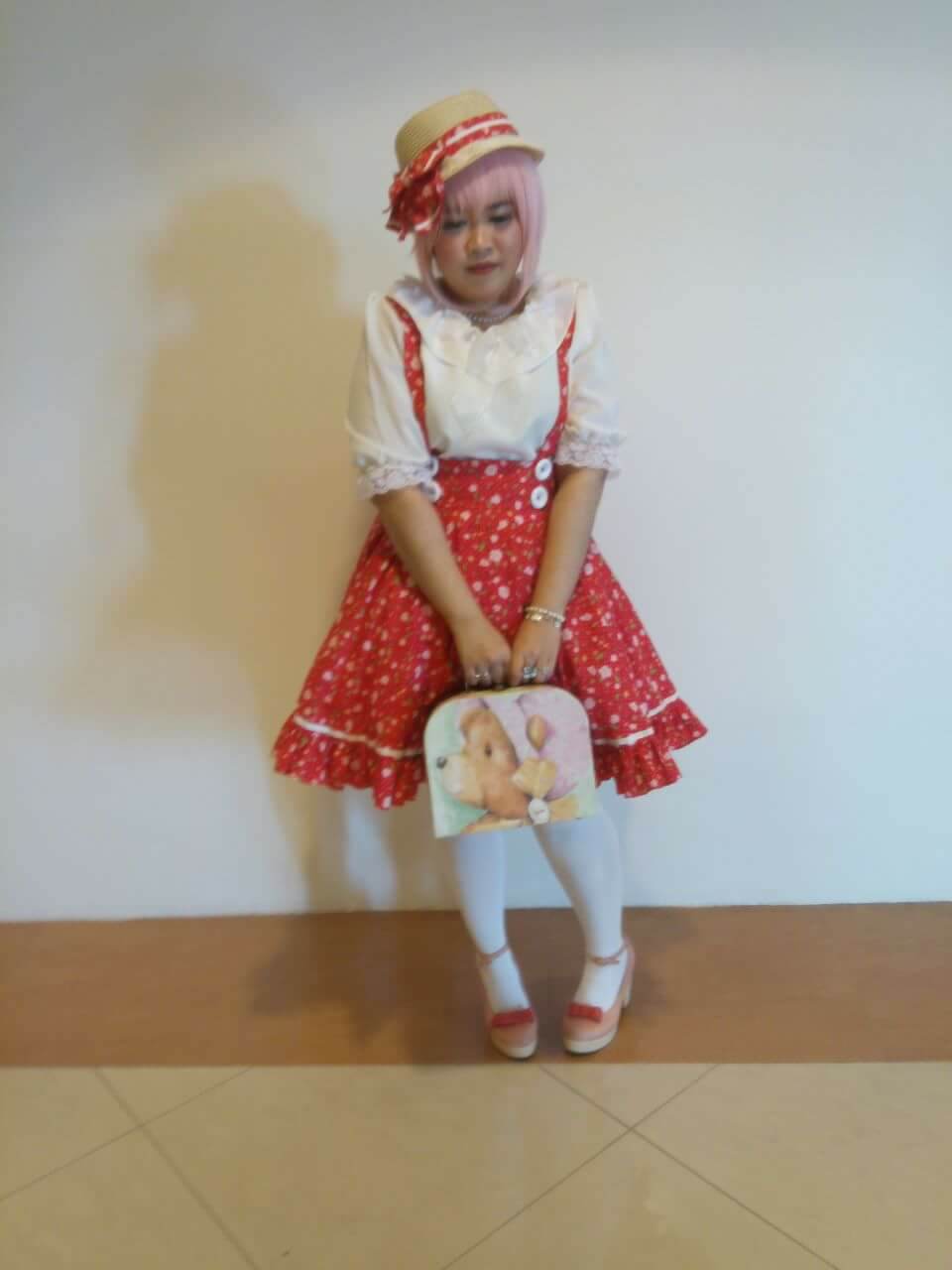 Azierah’s first Lolita dress up was in October 2015, for a Halloween event. In her three years of Lolita so far, her outfits are mostly of the sub-styles country, classic and sweet, despite her liking gothic in the past.

When asked to offer a quick differentiation between cosplay and Lolita fashion, Azierah explained that the latter is a fashion trend, or subculture, with various sub-styles like gothic, sweet, wa, qi, classic, country, punk, hime, ouji, with a focus on quality in both material and manufacture of garments; while the former is dressing up as a character in which one likes, a type of performance art in which participants don costumes and accessories to represent a specific character or idea.

Azierah also revealed that she makes most of her outfits and accessories.

I designed the one piece (OP), jumper skirt (JSK), skirt, blouse and petticoat. I even do my own headdress, head bows, hair clips, necklaces, bracelets, earrings or rings to match up with all my handmade dress. I do my own make up too.”

She adds that she finds the inspiration to create or design outfit from fabric stores or craft stores.

“When I looked at any fabrics that I like, I can think in my head what I will do with this fabric. I also like to look at festive decoration at malls. They give me inspiration too. Sometimes, I also browse Facebook for the newest Lolita fashion, then I take any design that I like and use it as reference for my own design.” 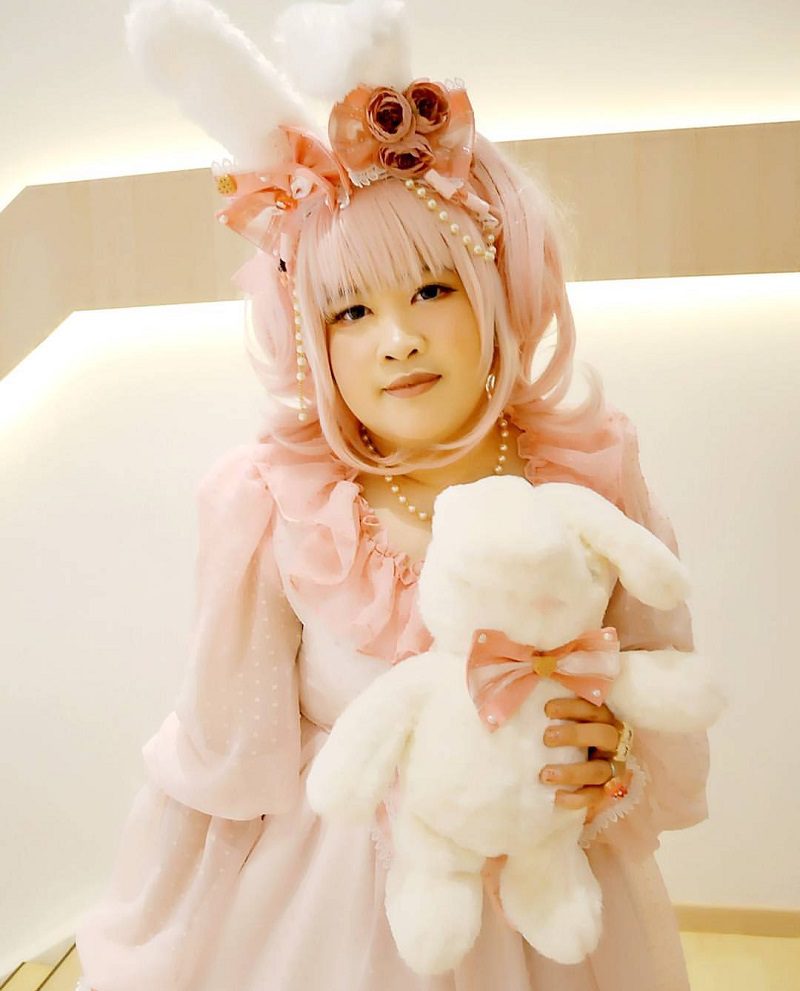 When asked if there’s anyone she looked up to in making Lolita dresses, Azierah named Minori Shironuri, a Japanese fashionista.

“Even though she is not Lolita, she designs and makes all her clothes. Her clothes mostly inspired from Victorian style. She revolutionised the fashion seen on the street of Harajuku in Tokyo, by reinventing a fashion style called ‘Shironuri’, which mean painted in white. I really admire her work.”

For Azierah, the toughest challenge she faces when pursuing this hobby is when she needs to design a different style with every fabric she gets, so she doesn’t look the same every time. She also spends around five to 60 hours to cut the fabric, sew them, make the accessories and do the finishing.

The harder my design, the more time I need to make it. But I feel satisfied and excited to wear it after I done making all the dresses and accessories. I like this hobby, it makes me feel cute and elegant in the same time.”

Azierah explains that she wears them mostly for her own satisfaction.

“When I wear it for casual meet ups with friends at malls, the kids who see me really like it. Their eyes sparkle as they asked to take photos with me. Even their parents call me a princess or dolly. It makes me happy to see Lolita fashion being accepted among other famous fashion like hipster or k-pop styles.” 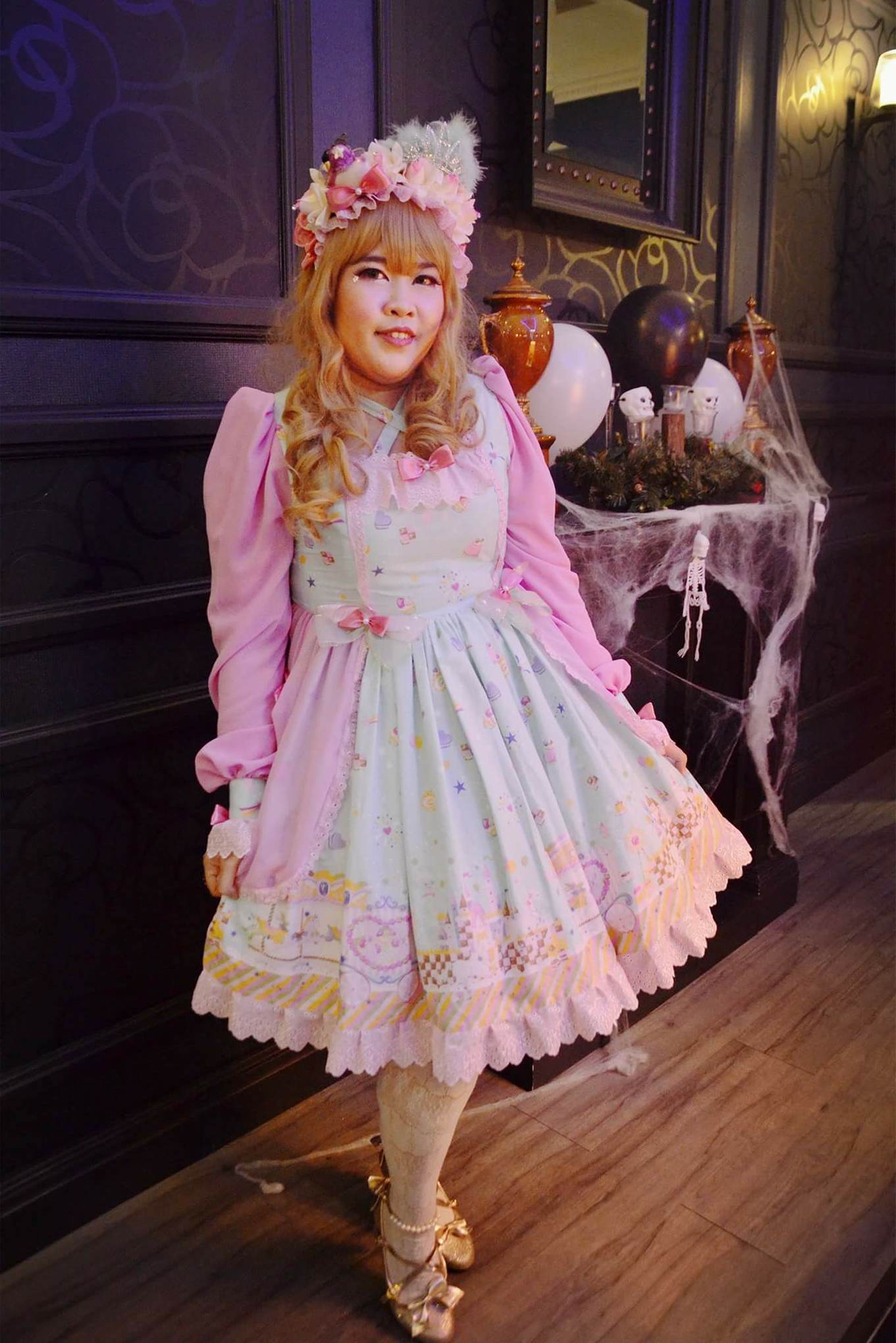 “I also like seeing people’s reaction when I tell them that I made my own clothes. This is how I get new customers too! It’s like I promoting my design just walking around when I go out.”

Does that mean she dresses as a Lolita to work?

“No. I never dress as a Lolita to my workplace, because I work with kids and need to extra careful to avoid any incidences. I’m afraid my Lolita dress will get ripped because kids are hyper active and always fighting with each other.”

Speaking of new customers, Azierah hopes that in the future, she will have her own seamstress shop, where she produces and sells her designs and clothes in Malaysia and worldwide.