Kenduri Kendara, not your ordinary theatre piece but still relatable

For starters, it felt like I was entering into someone’s home. I almost tiptoed and was consciously walking slower because I felt like I was intruding. However, that feeling soon disappeared as I received a warm invitation from the crew to join some other guests in the “wait room” for the first of three parts in Kenduri Kendara, Suap – a ceremony of feeding one another.

In groups of four, guests sat according to the colour-coded stools and put on some headphones, which I assumed would be telling us instructions for Suap.

It turned out to be a kind of relaxation ritual as we were told to feel each grain of the salt within our own little wooden box. The ritual didn’t end here, but you’ll have to attend to find out the best part!

In our same group, we proceeded to the literal Suap aspect of this interactive segment after cleaning our hands with some of the beautiful teko cuci tangan.

So, how hard can feeding a stranger be?

Surprisingly, not that difficult. After the initial reluctance dissipated, we were laughing away at how comical the present moment was while trying to feed each other rice with sambal tauhu tempe without making a mess. To me, it was a peculiar experience because I hardly eat with my hands at home, let alone feed someone else with it. 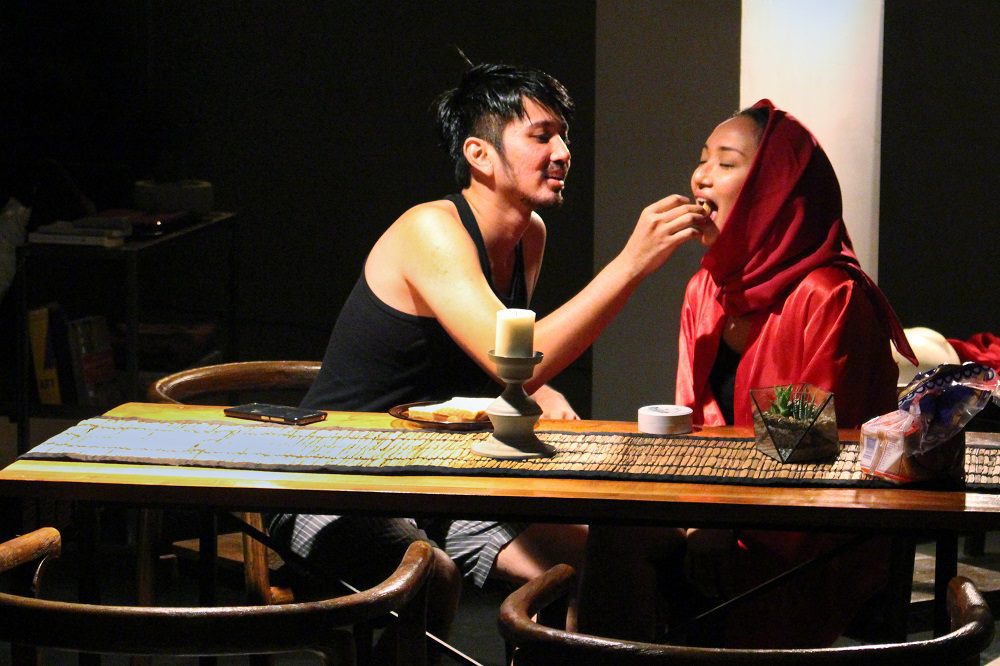 On to the second interactive segment, Gerobok, guests are invited on a self-discovery journey by choosing a scarf and observing how they look and feel after putting on the tudung.

“Gerobok has certain elements self-reflection through someone else’s experience as they might unintentionally eavesdrop while choosing their preferred scarf,” Azzad shares.

“At the end of the short interview, guests are given a portrait Polaroid of themselves as a keepsake for that particular self-reflection.”

While I did not participate in the self-reflection, what caught my attention at Gerobok was a mini documentary of women who shared their experience wearing the tudung, all while putting it on and taking it off. Azzad shared that this symbolizes the questions and struggles a Muslim woman might have when they make the decision to put on the tudung.

The final part of this unique piece is a more conventional take on theatre, Samar, where audiences join a young Muslim couple, Nina and Damar, on their decade-long journey through marriage.

Played by the winner of the 12th BOH Cameronian Arts Award Nadia Aqilah, Nina is an ambitious young lady who dreams of furthering her architectural studies in Glasgow.

Damar, played by Surnia Fizul, is a diligent worker in the oil and gas industry.

Due to an unexpected pregnancy, Nina and Damar decide to get married and raise the child, something I felt Damar was more keen on than Nina was as she had to put her dreams on hold.

Built on a devised play titled Pasang and based on the story of Azzad’s close friend, Zed Adam Idris smartly weaves realistic and sometimes playful conversations into the piece, making the entire play seem real and relatable. 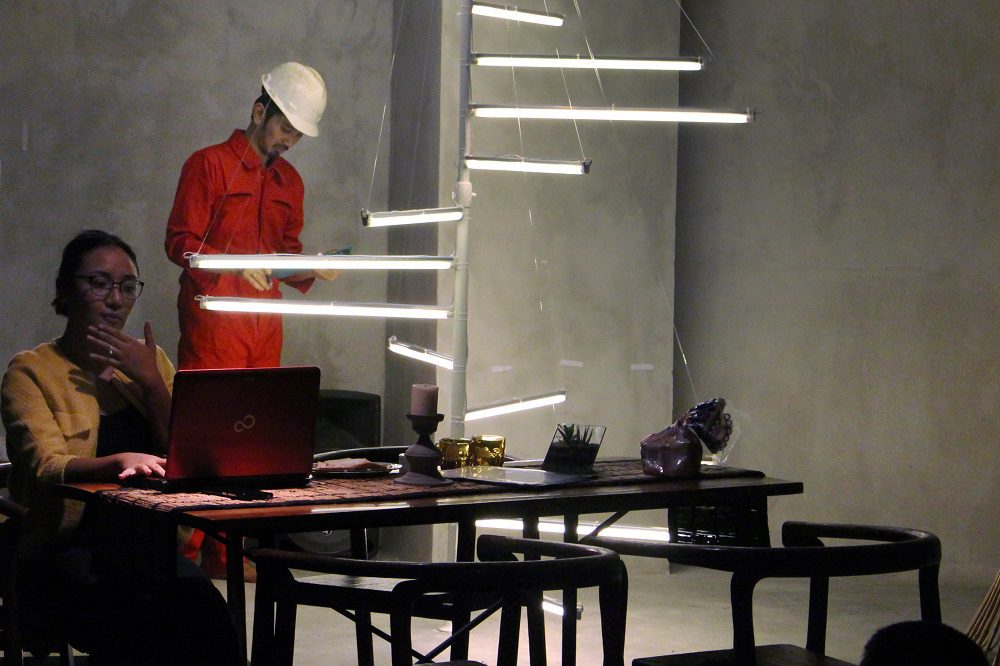 Little details such as the salt therapy and feeding each other at Suap were present in Samar, which brought the different segments together nicely.

Like any household, nitpicking is bound to happen and it was the tell-tale sign of cracks in Nina and Damar’s marriage as their little disputes turned into big arguments. Nina couldn’t understand why Damar was constantly tending to his terrariums and Damar wasn’t happy that Nina doesn’t give him enough attention.

The straw that broke the camel’s back was then their plans to move to Glasgow with their daughter, Zaha, got disrupted by Damar’s decision to purchase land using the funds they saved up for Glasgow. 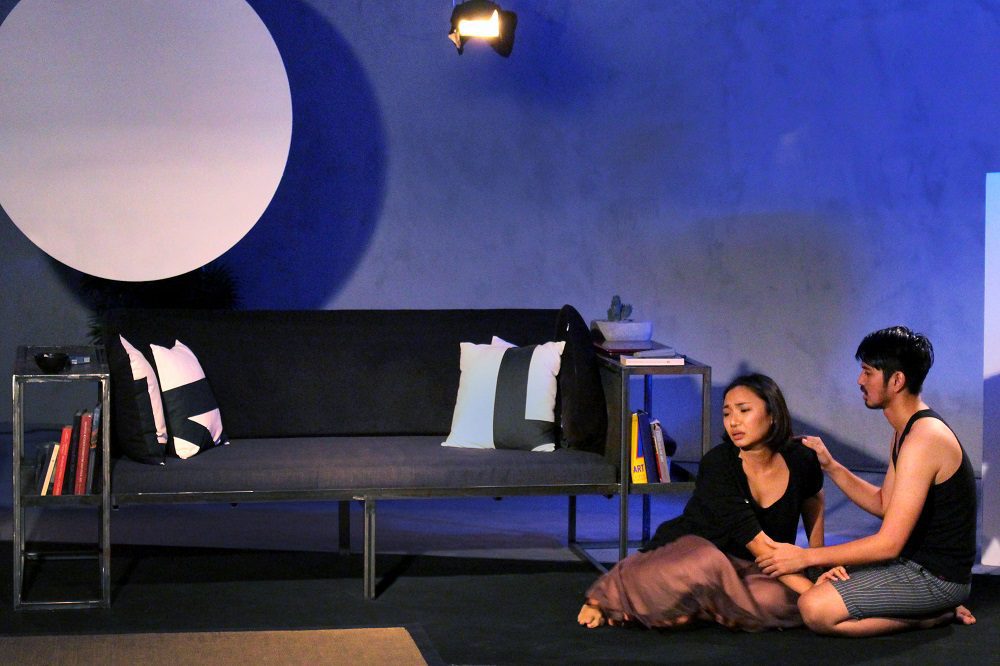 When Nina made the decision to go over to Glasgow on her own, long distance took a toll on the both of them.

Nina is seen to be putting on and taking off the hijab (like to women in the documentary at Gerobok) before finally deciding that she wants a divorce.

It was heartbreaking to watch the couple reminisce their journey together as they crumbled into a pile, literally and figuratively. 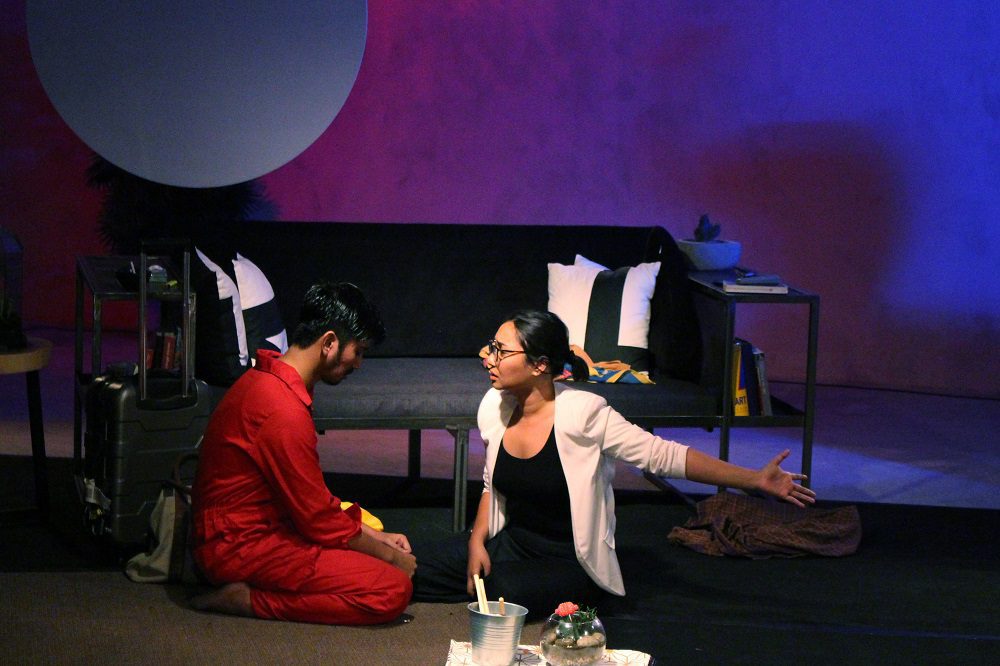 You’d think the nostalgia would change Nina’s mind, but she was still adamant about her decision as she begged Damar to lafazkan cerai. In Islam, the husband has a greater authority to divorce the wife than vice versa.

Throughout the play, Nina’s decisions and gestures show that she values her space and freedom, which contrasts with Damar’s more traditional view on life. While Damar fought to keep Nina and the marriage, it was clear to see that Nina’s depression worsened as long as she was stuck in the marriage.

Azzad shares that Samar deals with a clash of point of views, but also highlights the presence of choice at every step of the way in life. 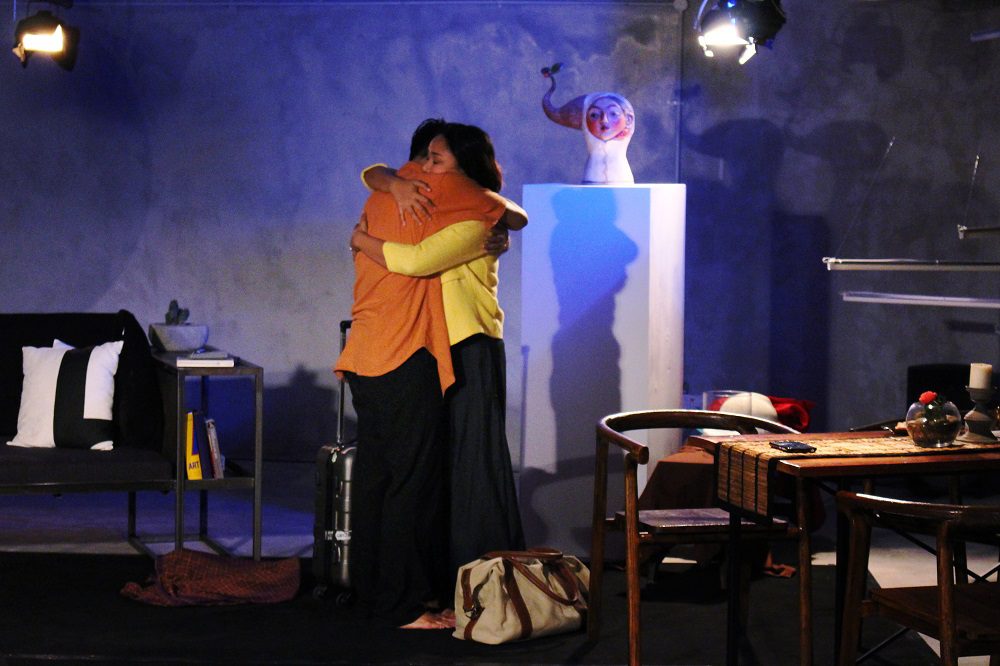 “For Damar, he believes in fate. He takes whatever comes his way and will persist,” Surnia notes.

On the other hand, Nadia shares that many women in Islam are stuck in the same situation as Nina and this aims to show the truth and create awareness of what happens behind closed doors.

Despite focusing on a Muslim couple, I felt many would find Kenduri Kendara relatable as the team has successfully explored what they initially set out to do, which are the themes of gender, faith and the frailty of human connections.

The Keepers Studio‘s Kenduri Kendara runs until 24th, from 7pm at Makespace, Quill City Mall. Get your tickets here! Did you experience Kenduri Kendara as well? Share your thoughts below or email us at [email protected]