The Retreat – A New Whodunit Play promises boldness in theatre

If you are anything like me, reading that title in my head really had me believing that ‘A New Whodunit Play’ meant that it was a new play by a production company called ‘Whodunit’.

If you are not anything like me, great. Because you would then know that ‘Whodunit’ is obviously a term to describe a movie (or in the case of The Retreat, a show) that leaves you guessing – in proper grammar – ‘who did it?’ from the get go, only to be pulled into a spiral of plot twists and crude revelations.

‘The Retreat, written and directed by Ian Nathaniel, 25, and Michelle Tan, 32, who are both halves of I’M Entertainment, promises to deliver something different to the Malaysian theatre scene to an audience that is prepared to leave all expectations at the door. 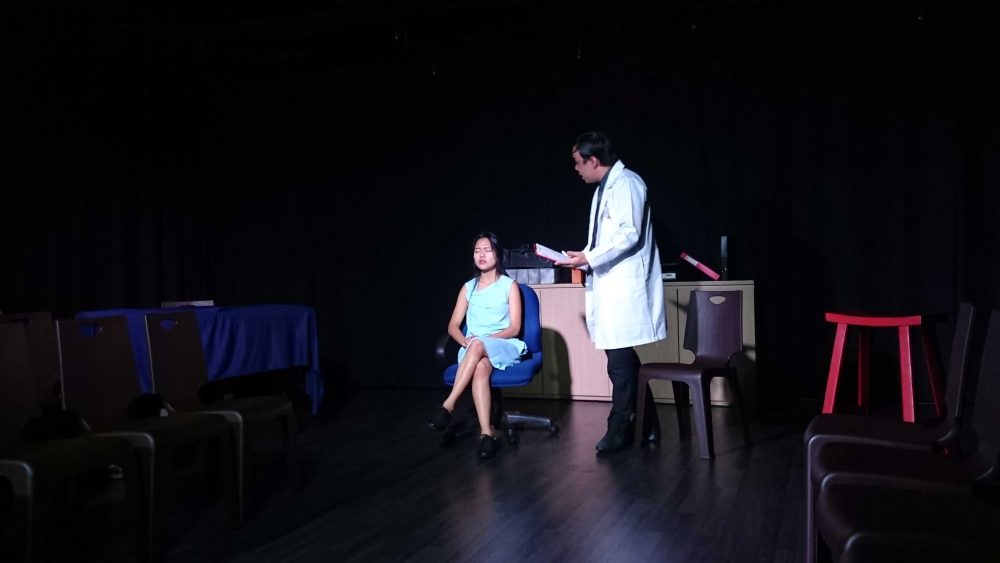 Without revealing too much – The Retreat is about a holiday. There.

What I can reveal is that there are characters that are subliminally complex, scenes of darkness, violence, loud noises, lighting effects that make you want to cling on to the person seated next to you and lots and lots of juicy, vulgar language.

You may want to warn your mother before bringing her.

‘The Retreat’ will offer you an immersive experience into a chaotic storyline that will keep members of the audience in a state of constant discomfort, all while stunning them with a gorgeous set up of a horror scene in front and around the audience.

Min Hui, 22, who plays Grace Campbell in The Retreat describes the show as an attempt to display the Film Noir genre.

What this show does is put a traditional film genre on to a stage. So Film Noir, people always think there is only one way to do it, in black and white…the whole French thing. We are trying to put this Film Noir ‘whodunit’ on stage, so that the audience can look forward to seeing how it can transpose live, before your eyes and to see how so many different characters interact with each other because it is really a medley of different characters.”

On her experience working with directors Ian and Michelle, she adds “A lot of the time, Ian and Michelle give free reign to us. They have a lot of trust in us as actors, to do it as we see fit. A lot of the script actually, the personal stories that we came up with for our characters, we weaved into it. The script has changed so much since day one and they have actually allowed us to be part of that, which is great.”

Alia who acts as a seductive, booby, vixen on the play describes her experience as ‘fun, engaging, erratic, annoying at times and demanding’.

The 30-year-old mother of two explains. “There has been some challenges, but we are all helping each other out, trying to make this play what it is. The play is creative, imaginative and it is pretty ballsy for Ian and Michelle to put this up because it is very new and the kind of scenes they are looking at is very different. They are somewhat experimenting and that, I appreciate.”

Needless to say, but I’ll say it anyway – the cast and directors are very excited to show you what they have been working on these past few months.

Director Ian Nathaniel or the ‘I in the I’M of I’M Entertaintment’ as he likes to call himself, explains that The Retreat is a step aside from the usual genres in Malaysian theatre.

“Basically what we are trying to do here is to break out of the norm, you always see this love-drama, theatre comedy happening all the time. Its nice, but we wanted more colour and more flavour into the scene here so we thought, why not bring the horror genre to the theatre scene?”

On the scariness factor, Michelle explains, “You are forced to confront the fear and your questions right in front of you. You do not have a sense of detachment from the actors, because it’s all happening right there. ”

To which Ian adds, “There are jump-scares and the audience don’t have to scream, but if they do then its an added bonus for us lah.” He then follows it with a chuckle which may or may not have had the slightest hint of sinister.

Tickets for The Retreat are to be pledged for RM70. Clear your calendars for this brilliant show on the 14th-16th of July at Twenty20Two located at SS4. The Retreat stars Vinna Law, Charles Roberts, Timmy Ong, Alia Kearney, Min Hui, and Lenny Wan with script written by Michelle Tan who co-directs the play with Ian Nathaniel. Want us to review a show? Drop us an email [email protected]