Why is Joe Hasham staging Harold Pinter’s Betrayal in Malay?

“This is set to be the most challenging production of my life,” Joe Hasham tells me as he motions me to sit in his cosy office at the Kuala Lumpur Performing Arts Centre (klpac).

I sat down and studied Joe for a bit. Here was a man who has had close to 50-years of experience as an actor, director and producer of numerous theatre productions and commercials – not to mention he was also the world’s first gay character in Australia’s longest serial, Number 96 – and he’s telling me this particular play is challenging?

I suppose he had seen my reaction to his remark, to which he adds, “Not to worry, it’s a challenge which thrills me to take up.”

In the performing arts, apart from William Shakespeare, there’s another English dramatist who has had his name mentioned on people’s lips frequently; Harold Pinter.

Just like Shakespeare, Pinter began his playwright career by writing comedies – which many critics dubbed “comedies of menace”. In his 50-years of writing, Pinter went on to write 29 plays, 15 dramatic sketches. He was an actor, director and was awarded multiple awards with among them being the Nobel Prize in Literature.

While Shakespeare is known for his flowery prose and his lengthy but impactful dialogues, Pinter wrote his plays economically.

Following its premiere in 1978, it has won a string of awards including the Olivier Award for Best New Play and the New York Critics’ Circle Award. The play has also been adapted numerous times on stage all over the world with David Jones directing a film in 1983 starring Jeremy Irons, Ben Kingsley and Patricia Hodge.

Betrayal, is the pinnacle of Pinter’s genius.

When Joe watched a theatre adaptation of Pinter’s Betrayal years ago, he made it his life’s mission to one day direct the play. Many of the adaptations he had watched had left him disappointed.

Betrayal centres around a love triangle between Emma, her husband Robert and his best friend Jerry. The entire story takes place in a span of nine-years; 1968 – 1977 with London and Venice serving as the play’s primary setting.

To make the task even more challenging, Joe is set to direct the play in both English and Bahasa Malaysia as two separate shows.

“So you’ll have the play in English on one night and in Bahasa Malaysia on another,” the 68-year-old grins.

The reason he chose to do so is because he wants to share and celebrate Pinter’s literary genius – which is showcased in the dialogues he has written – to a larger audience.

“Each dialogue, though minimal, can convey a myriad of meanings. Much of the dialogues are also punctuated with pauses – pauses which are important and crucial in the setting up of each scene.

“Every line, every word, every moment, every pause has an intrinsic influence on the outcome of the ten year journey of the play,” Joe says to me. 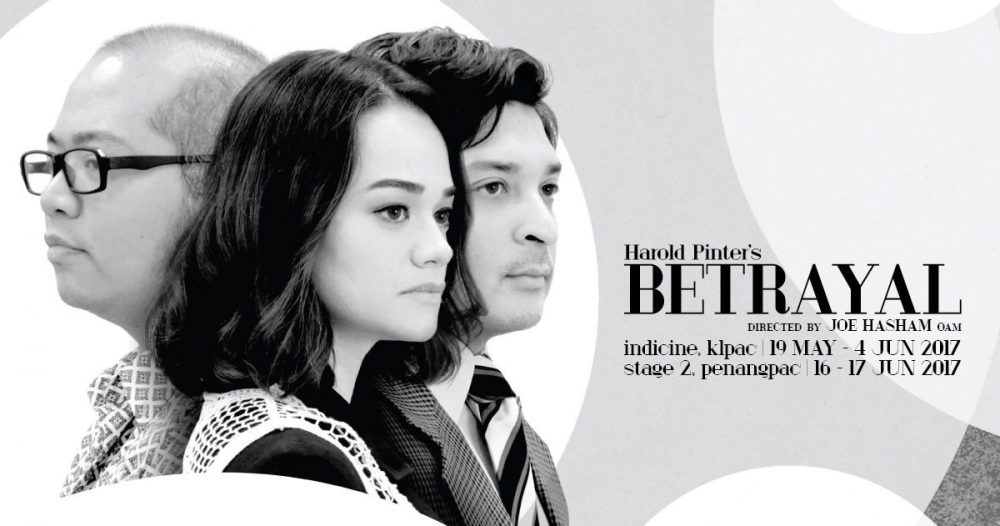 “But wait, hold on Joe,” I say, placing my pen down. “How ARE you going to direct this play in Bahasa Malaysia?”

It took klpac’s resident director Omar close to a month in translating the script. Unlike his previous success, Datuk Seri – an adaptation of Macbeth – Betrayal is an entirely different ball game altogether.

“It was quite a challenge! I faced many difficulties in translating the play,” Omar reveals.

Unlike Datuk Seri where Omar had the opportunity to play with the beauty of words, Pinter’s style of writing is not only economical, but each word carried a myriad of interpretations.

“So something simple such as an expression; “I’m glad to see you” can mean different things. In Bahasa Malaysia we might have an expression like that but it’s not really that.”

However, the task to translate the play has allowed Omar plenty of room to dissect the character he is playing, Robert.

To prepare for the play, Omar has been assisting triple threat Stephanie Van Driesen as well by recording her lines in Bahasa Malaysia. From there, she learns the proper pronunciations and practices her lines.

With a dedicated cast comprising of Omar, Stephanie, the extremely talented Razif Hashim, who plays Jerry and the talented young and upcoming actor, Jad Hidhir,  Joe has no qualms that the play will promise a unique but also an original take on Pinter’s Betrayal in both languages.