Malaysian novelist K.S. Maniam is still based in Malaysia and has not left to the United States as claimed in Dewan Sastera recently.

Government department, Dewan Bahasa dan Pustaka (DBP), through its monthly Malay language magazine, Dewan Sastera had reported in its April, 2017 issue that the 75-year-old had migrated to the United States.

In an essay titled “Kolonialisme dan Etnosentrisme: Suatu Retrospeksi Penulis India Malaysia”, Maniam was reported to have left the country purely for the purpose of being accepted and recognised internationally.

The magazine claimed that it made this discovery based on survey forms that were sent out to 60 Malaysian Indian writers, who regularly wrote in Bahasa Malaysia, English and Tamil.

“I am surprised with this confusion. If I had left Malaysia, how come I’m answering your phone call through a Malaysian number?” Maniam said to Eksentrika in a phone interview today.

Slamming DBP and Dewan Sastera for its irresponsible reporting, Maniam said the writer should have called him personally before making such claims.

“Infact, I’ve worked with Dewan Sastera by assisting them in translating several of my plays into Bahasa Malaysia.

What boggles me is that despite all these years, no one contacted me to double check if I had left the country or not.”

Maniam has written three novels with his first, The Return (1981), being well received locally. He has also written a couple of plays and a string of short stories to date.

When asked if he would be filing a letter of complaint to the publication, Maniam said he prefers to ignore the government department and the magazine.

“I will not be taking any action because it is not life threatening. This is an example of fake news. Let them drown in this little game of theirs.”

Meanwhile, Kavyan Writers’ Group president and founder, Uthaya Sankar SB, who was the first to spot the misreport, promptly did his own investigation and discovered that the magazine’s essay feedback forms that were purportedly sent out, had not reached all of the intended recipients. 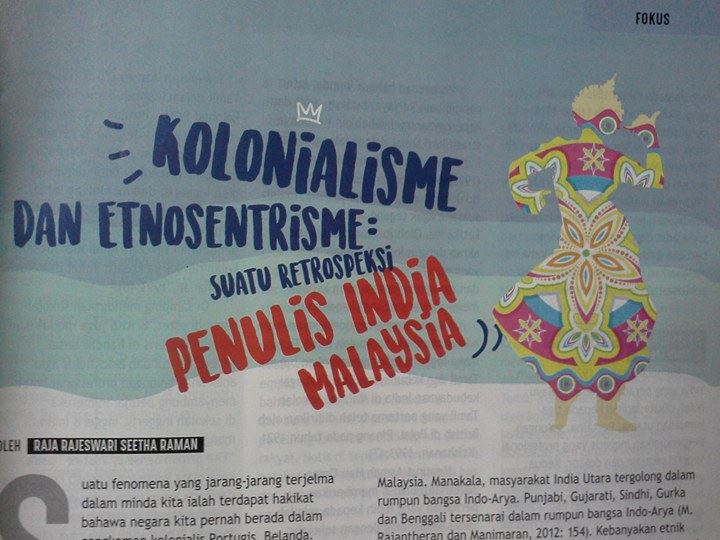 “I contacted 27-Malaysian Indian writers and 22 of them confirmed that they did not receive the survey forms,” Uthaya said.

He added that one had admitted to getting the form via email but had not responded in time. Only two had filled them up and emailed back to the writer.

“The writer had claimed that all 20 respondents were civil servants when in truth the only two who responded are from the private sector.”

This led Uthaya to email the editor of the magazine to point out the errors, in hopes it would be rectified. Instead, he received threats laced with racist remarks.

“The editor had called me names such as “twat” and “asshole” when I pointed out the flaws through Whatsapp. On Facebook, he posted an offensive status and tagged me in it.” 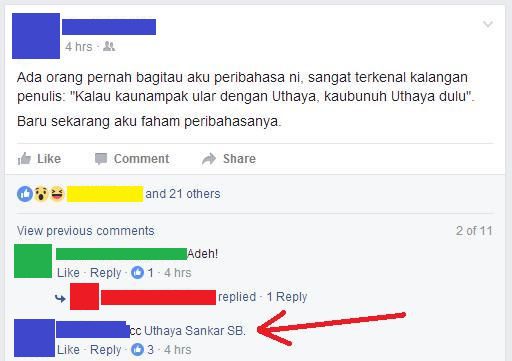 Taking screenshots of the said status, Uthaya posted them onto Facebook. This led many Malaysian writers to condemn the editor’s distasteful behaviour.

Award winning Malaysian author of Evening Is the Whole Day (2008), Preeta Samarasan said the incident, which she at first thought to be a mere “storm in a teacup”, escalated to the point it reminded her of how systemic racism against those of African descent worked in Western countries.

Meanwhile, Malaysian author and playwright Faisal Tehrani also slammed the government funded publication for not going after the writer of the erroneous essay.

Faisal has previously had four of his books banned by the Home Ministry for allegedly containing Syiah elements.

Currently, Uthaya is mulling on lodging a police report but only if the DBP fails to take action on the essay writer responsible for false reporting and editor for issuing racist remarks.

“I also hope DBP publishes a piece that I’ve already submitted to Dewan Sastera about the “false data” in the writer’s essay. Both the writer and editor should issue a clear apology in its May 2017 issue,” Uthaya said to Eksentrika today.

Uthaya is now in the midst of releasing a series of essays with authentic data gathered on Sasterawan Kavyan (Malaysian Indian writers). The first of the five-part was published yesterday and can be read on Eksentrika.

Eksentrika’s attempts to obtain comments from Dewan Sastera proved futile as emails, messages and calls have been left unanswered to date.

Do you feel the editor of Dewan Sastera should issue an apology? Comment below! Have an opinion on this issue? Email us at [email protected]