Exploring the mind of a kingpin through ‘Kings of Petaling Street’

Titled ‘Kings of Petaling Street’, the 268-paged novel is written by William Tham, who is also the Creative Nonfiction editor of the Vancouver-based Ricepaper magazine.

Drawing inspiration from Malaysia’s most notorious and deadliest gangster, Wong Swee Chin aka Botak Chin, William reveals that the idea for the story first took root after reading Eileen Lian’s story, “My Father the Hero” which was published in Fixi Novo’s KL Noir: White in 2013.

“From that concept I gradually filled in the details of the plot. Somewhere around this time a massive wave of assassinations flared up in Kuala Lumpur.

“Coupled with an anecdote I vividly remember from my childhood, where a man was shot in the head at dinner in a Cheras corner-shop, and drawing inspiration from the exploits of the infamous Botak Chin, I had the basis of my novel,” William shares with me. All that remained was to write the book. 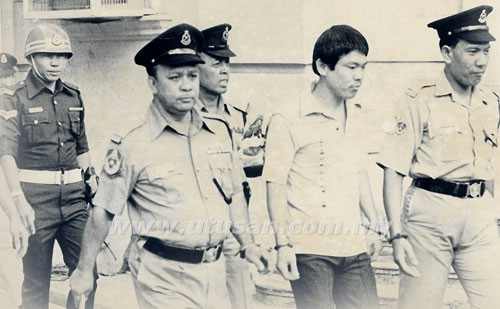 The responsibility in the creation of the setting of his story – Petaling Street – largely fell on his memories. Since being away from Malaysia for some years, William says his memories of Kuala Lumpur grew huge, sprawling and layered with textures and stories.

“It (Kuala Lumpur) acquired a very noir-ish atmosphere, and if I substituted the haze with fog it could have been the setting of a Raymond Chandler or Mario Puzo story.”

At the heart of William’s crime-filled world is local gangster dubbed the King of Petaling Street, Wong Kah Lok, who suffers from an existential crisis.

Though the focus is on Wong who battles to allay the fractures between himself and his son Gavin – who is drawn to his father’s world by a morbid curiosity, the novel also explores the mindset of other characters.

“As the events of the story unfold, other characters get drawn in, each with their own agendas,” William explains.

There’s Inspector Ramalingam who is on a personal mission to fulfil his duties as his memory gradually deteriorates. Chancellor Zahid, on the other hand, is an opportunistic politician who seeks ways to tie up loose ends as he guns for power. All four characters are somehow tied together by a mysterious assassin, Maut (death, in Malay).

It was an enjoyable process for William as he pulled together various tropes and refashioning these characters into a Malaysian setting while exploring the story of contemporary Malaysia.

While I wanted to include more political elements, the current political climate simply doesn’t allow me to write about it. So this is a straight-up crime story, but its meaning is wide open to interpretation.”

The process of writing the entire story took about eight-months. But it was the process of finding a publisher and the subsequent editing which then stretched the entire process to four-years, according to William.

Now that it has been released, a much relieved William looks forward to satiate book readers abroad who are thirsty to know more about Malaysia.

“Here in Vancouver, where I’m currently based, there seems to be a real curiosity with Malaysia even though it’s making headlines for all the wrong reasons.

“What I think pulls people in is the fact that it breaks the conventional stereotypes of a colonial country. It had been cobbled together from various states and kingdoms with their own history, it had been famous for its trading ports in the days of the Malaccan Sultanate, and now there’s the current diverse society and massive prestige projects. But below all of this is an unease that lurks in the background.

“Something is just not right in Malaysia, and I think that it is this incongruity that allows us to tell fascinating stories.”

William’s ‘ Kings of Petaling Street’ is available for order through Kinokuniya and local bookstores supplied by Fixi London’s distributor. Additionally, readers can also choose to purchase the book via Book Depository which offers the book in ringgit with free shipping! How cool is that?

Launching a book? Send us details to [email protected] We would love to write about it!